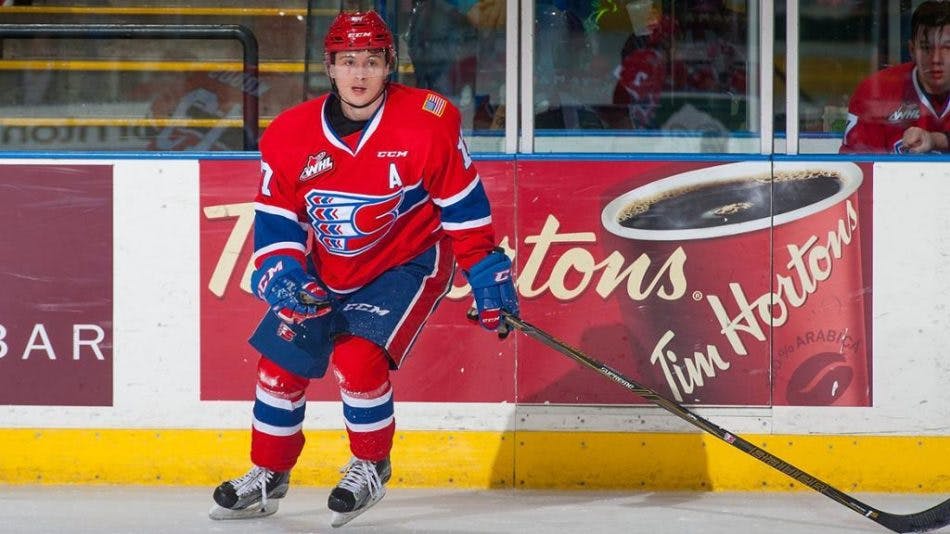 Photo credit: NHL.COM
By Cam Lewis
5 years ago
Comments
It took a while for Kailer Yamamoto to find his groove in the WHL, but the Oilers’ first-round pick from 2017 has been tearing it up as of late. As a result, he’s been named WHL Player of the Week. It’s the first time this season he’s been given the honours.

.@EdmontonOilers prospect @kailer_yamamoto of the @spokanechiefs has been named the WHL On the Run Player of the Week!

— The WHL (@TheWHL) January 29, 2018
Yamamoto spent nine games with the Oilers after making the team out of training camp. After the cup of coffee, the Oilers sent him back to Spokane in order to avoid burning a year off of his entry-level contract. He got off to a slow start re-adjusting to the league, only scoring 12 points in his first 13 games back with the Chiefs.
He was named to the American World Junior squad in December where he recorded two goals and two assists in a Bronze medal winning effort. Since returning, though, Yamamoto has looked like the talent that finished sixth in WHL scoring in his draft year. In his last nine games, Yamamoto has seven goals and 19 points, giving him 31 points in 21 games for the season.
Enjoy these videos from Yamamoto’s hot streak:
Advertisement
Ad
Advertisement
Ad

That goal came with just 1:26 to go in the period to put Spokane up 2-0.#WOWZER #GoChiefsGo pic.twitter.com/2MScmTKOuc

— Spokane Chiefs (@spokanechiefs) January 18, 2018
January Alzheimer’s Awareness Month, and we’re starting conversations to help people see dementia differently.
We’ve spoken to people living with dementia from across the country who’ve shared openly about their challenges and triumphs.
Like Mary Beth, who was diagnosed when she was 45 and became a fierce advocate for the rights of people with dementia. There’s also Mario, who got his diagnosis a year after he retired and, while it changed what he expected of his future, he has embraced it anyway, volunteering in his community, and taking up photography to express himself creatively. And then there’s Naomi, whose mum was diagnosed at 54, and who is a dedicated daughter, caregiver, and advocate for change in the way dementia is viewed in Canada.  You can read about each of their journeys via the web-link below.
Advertisement
Ad
Advertisement
Ad
http://www.ilivewithdementia.ca