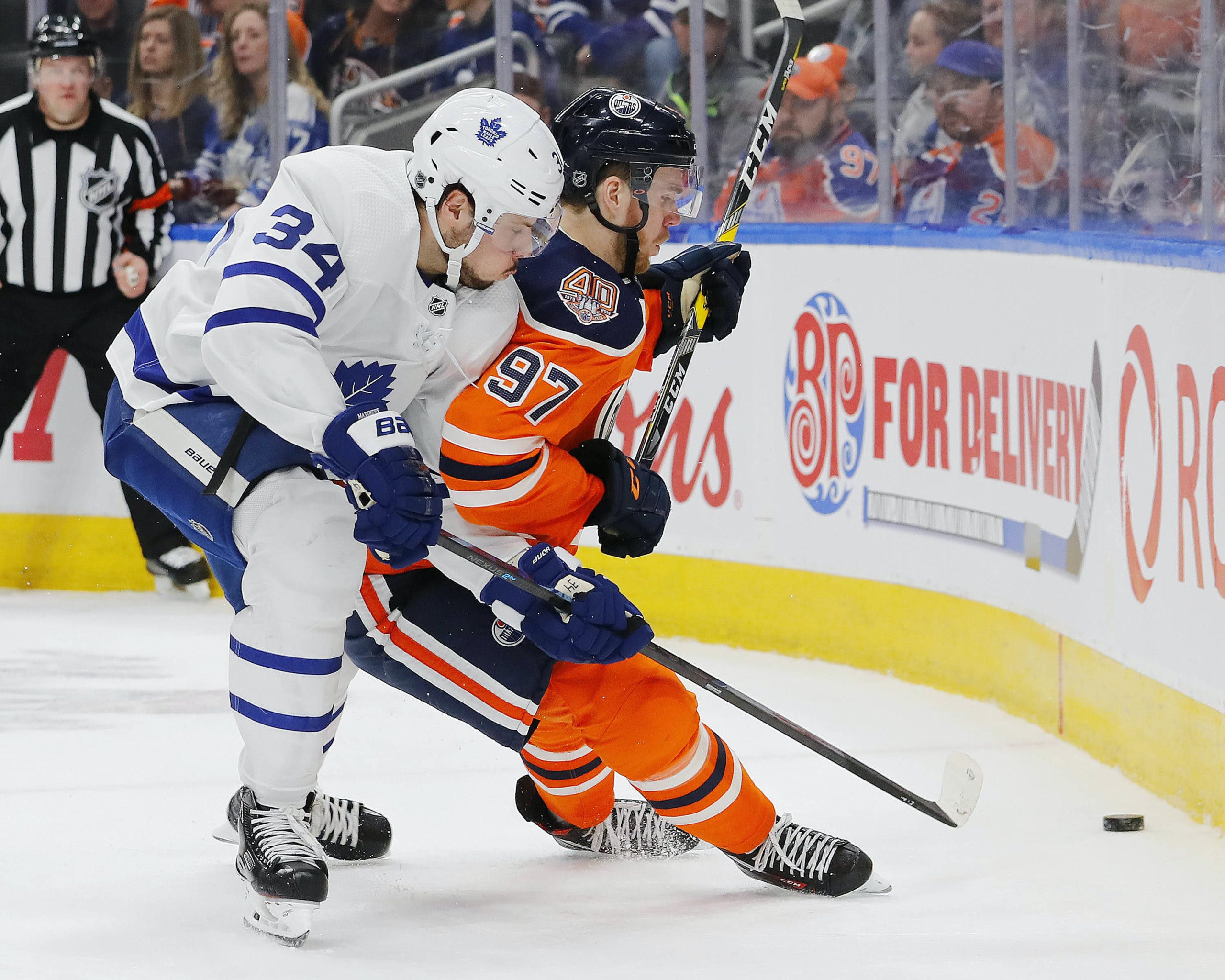 Photo credit: Perry Nelson-USA TODAY Sports
By Jason Gregor
1 year ago
Comments
If your team plays in the North Division you likely think NHL scoring is up, but in fact, it is down slightly across the NHL. Teams are averaging 2.94 goals/game, down from 2.97 last season. (Hockey-reference.com includes shootout goals in its totals.) The North averages 3.12 goals/game, while the other three divisions combined are at 2.87. Many have suggested the North is playing wide open hockey, but I’d argue the other three divisions simply lack the same offensive talent.
Scoring is usually up early in the season, and then slowly goes down as the season progresses. The fact the 24 American teams are already averaging fewer goals than end-of-the-season league average last year tells me it is more a lack of offensive punch in those divisions, than it is the North playing wide open hockey.
The Central division teams are averaging 2.94 goals/game, the East is at 2.85 and the West is 2.75. The league average last season was 2.97. It is more a knock on the lack of offence on those teams, rather than sound defence in the North. But sadly, many NHL pundits would rather promote defence.
It is asinine. Goals sell the game, not neutral zone traps, teams who can put it off the glass and out regularly, or those who don’t have the skill to score.
Advertisement
Ad
Advertisement
Ad
Prior to the season, I outlined why I felt the North would score more goals. The North was composed of 31% of the league’s top scorers over the past two seasons, so one should be surprised the Canadian division is producing so many goals.
What is a surprise is how many points some of the top players have already. The great starts by Connor McDavid, Leon Draisaitl, Mitch Marner and Auston Matthews have fans buzzing, not only in Toronto and Edmonton, but around the NHL. The “Hart trophy” talk is a bit premature considering many teams haven’t even played 20 games, but I understand the excitement due to all the goals and points they are producing.
I wanted to look at the past five seasons of points among these four, along with David Pastrnak, Patrick Kane and Nathan MacKinnon. If Kucherov was healthy this year, I’d have included him as well.
Advertisement
Ad
Advertisement
Ad
Here are their numbers from 2016/2017 to now…
McDavid’s pts/game is much higher than anyone. Matthews and Pastrnak are the leaders in goals.
Here is 2018 to now:
As the young guns get more experience their points/game and goals/game are going up. Even Patrick Kane at his age was producing more. McDavid averaged 0.35+ more pts/game than Matthews in both charts. While Matthews and Pastrnak are leaders in goals
2019 to present day.
McDavid and Matthews continue to improve their points/game and goals/game. Draisaitl inched closer to McDavid in points/game. Draisaitl had the largest point/game increase, while McDavid was up to 1.54 pts/game while Pastrnak and Matthews were at 0.65 goals/game or higher.
2020 to present.
McDavid eclipses 1.60 points/game, Draisaitl is up to 1.54 while Pastrnak and Matthews are over 0.72 goals/game.
Advertisement
Ad
Advertisement
Ad
Now this season…
Of course this is a smaller sample, but early on the numbers are incredibly impressive.
We haven’t seen a player average one goal per game since 1994 when Cam Neely scored 50 goals in 49 games. It would be unreal if Matthews could maintain that pace. I love goals, so I hope we see it. The highest we’ve seen in the 2000s was in 2008 when Alex Ovechkin scored 65 goals in 82 games (0.79 goals/game). Matthews beating that would be a great feat. Pastrnak missed seven games, so in theory he could be like Neely and score 50 in 49 games.
Meanwhile for McDavid, only five players have averaged 1.85 points/game in an NHL season.
Wayne Gretzky did it 11 times. His last time was in 1991.
Mario Lemieux did it six times. The last was in 1996 when he averaged 2.30 points/game.
Those two have the top-17 point-per-game totals.
Advertisement
Ad
Advertisement
Ad
Steve Yzerman is 18th at 1.94 in 1989 when he scored 155 points in 80 games.
Bernie Nichols is 19th with 1.90 in 1989 when he tallied 150 points in 79 games.
Adam Oates is 20th at 1.89 in 1991 when he produced 115 points in 61 games.
McDavid sits at 1.85. Outside of Lemieux’s ridiculous 1996, the highest totals in the past 25 years include:
Lemieux’s 1.77 (76 pts in 43 games) in 2001.
Sidney Crosby had 1.68 in 2012, but he only played 22 games. He also had 1.61 in 41 games in 2011 before he was concussed.
Nikita Kucherov had 1.59 in 2019 with 128 points in 82 games.
Draisaitl scored 1.55 last season with 110 points in 71 games.
Even if McDavid only scores at 1.75 points/game it will be an amazing season, but pushing 1.8 or more would be great for the NHL.
Advertisement
Ad
Advertisement
Ad
I hope Matthews, or possibly Pastrnak, push for 50 goals and McDavid pushes 100 points. It would make for great conversations and debates, but hopefully people will focus more on how incredible it is.
I think the narrative in the NHL needs to be readjusted. Scoring goals isn’t a bad thing. It should be appreciated, and the reason the North is scoring more goals is because it has more elite offensive players than the other divisions. That should be the conversation, not that the North is weak defensively. If anything, the conversation should be about why the other divisions so bad at scoring.