Advertisement
Ad
Nation Thoughts: What changes should the Oilers make? 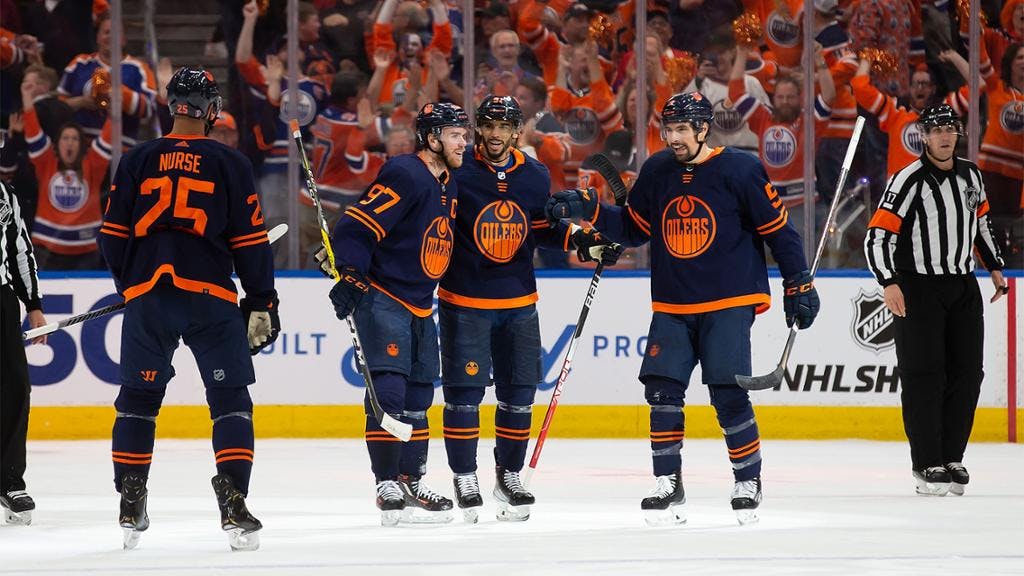 By Liam Horrobin
5 months ago
Comments
It’s safe to say the Western Conference Finals haven’t gone as planned for the Edmonton Oilers. Heading into game three, the Oilers are down 3-0 after dropping game three on home ice 4-2.
It was tough to watch, especially on the eventual game winner. Connor McDavid got Edmonton off to a perfect start scoring within the first minute. The fortunate didn’t continue for the Oilers, who were down 2-1 midway through the third period. Ryan McLeod eventually tied the game, and the momentum swayed into the home team’s favour.
They say hockey is a game of inches. If Oilers fans didn’t know that before Saturday night, they sure figured it out. Shortly after McLeod tied the game, Evan Bouchard fired a shot off the post. JT Compher then came out of the box, beat Bouchard to the puck, and then fired the puck five-hole on @Mike Smith. Backbreaker, heartbreaker, whatever you want to call it. It stung.
Advertisement
Ad
Advertisement
Ad
As game four approaches, there are plenty of questions surrounding the lineup. Is Darnell Nurse healthy enough to keep playing? Is a suspension incoming for Evander Kane? Can Kailer Yamomoto return to the lineup?
With those questions looming, let’s see what the Nation thinks.

Shelter Nurses minutes way more if they’re going to insist on playing him, especially at 11 and 7

I thought our line up tonight looked good before puck drop, we just looked flat at times. We have to reduce Nurse' minutes.

You need a dramatic shift. Winning on 'inches' isn't going to work on our 4th attempt. Put in Koski and Holloway. Keep Russell in, 7D. Keep Nurse away from their top line.

Advertisement
Ad
Advertisement
Ad
I’ll be captain obvious here, Darnell Nurse is seriously hurt, and it’s affecting his play. You’ve got to respect what he’s doing for his teammates and this city. At this point, Jay Woodcroft isn’t going to take him out of the lineup. However, I agree with Greg, Tony and Reece; you’ve got to help Nurse out. Keep him away from Colorado’s top guys and limit his minutes. Will it happen? I don’t think so.

To change? Holloway and Neumalainan in, really have nothing to lose, get some experience in. Need to see these guys next year.

I wouldn’t change a lot. I thought we played well.

Assuming Kane is out, you’ve got to give Holloway a shot. Other than that I stay the course tbh.

Kassian Out
Nurse Out
Smith Out
Foegle Out

Broberg, Shore, Holloway and Koskinen in.

The fans want to see Dylan Holloway. If Kane does get a suspension, then maybe replacing skill with skill wouldn’t be such a bad idea.

Put in Holloway and find some kind of fixing machine to fix Nurse, Draisaitl and Klefbom.

Oh, Oscar Klefbom. The ripple effect of Klefbom leaving this team has been crazy. The things I would do to have him back in our lineup.
If he was still here would Nurse have his 8-year ticket? The Oilers likely wouldn’t have signed Tyson Barrie. Then you’ve also got to consider that Adam Larsson might’ve stayed.
I doubt we’ll ever see him play again, unfortunately. Hopefully, he can continue to get healthy and live a good healthy life.
Advertisement
Ad
Advertisement
Ad
Moving on from Klefbom and into game four, the most significant change is going to be replacing Kane
As a replacement, is Dylan Holloway the answer? If Woodcroft wants to make the straight swap and put him into the top six then yes. However, I don’t think Woodcroft wants that. Instead, I could see McLeod getting the bump up the lineup. Then as Kane’s replacement, we could see Devin Shore draw into the lineup for the first time this postseason.
One other change that might happen is Josh Archibald replacing Brad Malone. Malone didn’t get much time to showcase himself in game three. It was too tight of a game. He played 6:40 with the majority of that time on the penalty kill. Honestly,  I don’t think it matters who plays on that line.
Advertisement
Ad
Advertisement
Ad
The game plan for game four is do or die. Play Connor McDavid and Leon Draisaitl as much as you can because what do you have to lose. Your backs are already against the wall.
One thing that is important to note Oilers Nation is that Hope Will Never Die. If you’re going to Rogers Place tomorrow, be loud, be proud, and help cheer the boys on to victory.
It isn’t over yet.