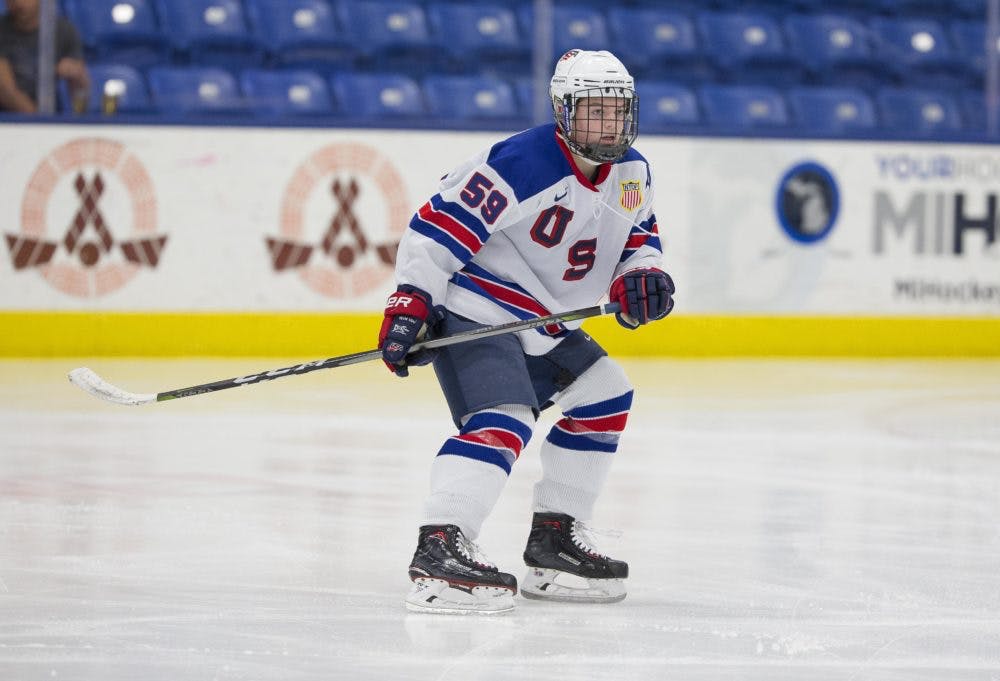 By Dustin Nielson
3 years ago
Comments
The Oilers head into Friday night’s draft with six selections and while it seems crazy to spend time looking at targets for each of those picks I decided to do it anyway.

He is short, but not exactly small. His squat figure is stocky and well-built. He has a very fast top speed and an explosive first few steps. He has extremely fast soft hands, without which many of Hughes’ lovely feeds would have clanked off his stick and been turned over, instead of being converted into sirens and lights and goals. He is patient with the puck and doesn’t rush his shots.

With a player with the broad set of shiny tools that Cozens has, it can be very easy to overlook what he does away from the puck. He plays with an acute understanding of positioning, always on the right side of the man he is covering, and his body and stick are generally angled to restrict passing and shooting lanes. He also uses his plus frame as a physical presence. He is not one to go
for a big, intimidating open ice hit, but he finishes his checks, provides positive pressure on the forecheck and is difficult to dislodge once he establishes a foothold in the opposing crease

Dach is a general on the ice. He has the ability to slow the game down and take it over. He makes his linemates and his whole team better. He has remarkable vision for a teenager and can hold the puck in possession as long as is necessary for someone to get open in a better position. Outside of the raw ability to maintain the puck, he is also exceptionally skilled. He weights his passes beautifully, to better help his linemates receive them in stride and thus maintaining speed on the attack.

Let’s explore his total package in a little bit more detail. He plays a North-South game, although with more than a little wiggle. He is a very shifty skater with great edges that allow him to avoid dead ends. His first few steps are explosive, and he gets from point A to point B as well as anyone.

While not strictly an offensive defenseman, Broberg is an incredible skater, who can pick up the puck in his own zone and be buzzing behind the opposing net in a flash. He gets to his top speed within two or three steps and take long, powerful strides to maintain his elite pace. While he is most often found skating in straight lines, he has the agility and edges to mix things up.

Let’s start with his top tool, his shot. He is not as prolific at putting the puck in the net as Cole Caufield, but as a projectable tool, Boldy has the superior shot. The wrist shot is heavy and whippy, and simply deadly from all angles. He can score from a distance, or from in tight. I don’t think it is going out on a limb to project multiple 30+ goal seasons in his NHL future.

Mastrosimone could be a more explosive skater, but he has enough to get some separation at times and a decent top speed. His skating plays up a bit as he never stops moving his feet. He benefited greatly from the Steel’s association, with skills coach Darry Belfry, as his skill set works together as a whole to allow him to make plays in a way that many other top prospects cannot. He processes the game incredibly rapidly and imposes himself on the game in all situations.

He is a big, powerful winger with a monster shot from the circles. Although a natural shooter, he is an accomplished playmaker as well and his hand-eye coordination adds another layer to his game. He can play with his back to the net and his solid build from top to bottom allows him to maintain possession and puck control while a defender is draped on his back. When the puck is travelling north, or his team is already in possession, he looks like a potential first rounder. In his own end, he will try, but he is ineffective. He backchecks, but then tends to drift in his own zone after possession has been established.

Tall and lanky, Attard is also an impressive skater with a clean stride. He reads the play well for the USHL level, although I would expect no less from a 20-year-old in that league. Take with a grain of salt, but he does a great job filling in passing and shooting lanes in his own end. He takes advantage of his long reach and is a big part of the reason why Tri-City was the league’s stingiest team this year.

Korczak has the body to match the style and he loves to physically engage opposing forwards. Whether playing tough in the corners, or going for a big open ice hit, he is an attack dog, and can be overpowering at the WHL level. To his credit, he doesn’t let his enthusiasm for the rough stuff to allow him to be pulled out of position. He has hockey smarts and plays with an active stick, helping him rack up the defensive stops. Like a lot of young players, he can be prone to the odd brain cramp, losing bearings in his own end, but more maturity and work on keeping his game simple should help alleviate those.

His hands are soft and fast, and he is simply a brilliant puck carrier. He is equally as proficient in dangling and carrying the puck through and past opponents as he is at finding a thin seam through which to thread a pass to a linemate. As good as his playmaking is, he has historically been more likely to score himself. Both his wrist shots and slap shots are potent weapons, but the latter is his preferred means of scoring. Both are accurate and his wrist shot has a particularly tricky and quick release.

Big scorer in Finnish junior ranks kept up the pace with the WU18s. Explosive skater with flashy hands is physically immature.

Big winger plays a disruptive checking game with enough speed to keep defenders on their heels. Turned his game up in the postseason helping his team to a USHL championship.

Blends power and skill in his game. He is a strong skater and a full arsenal of shots to choose from. Responsible and can play in a variety of roles.

Smart two-way player is an underrated playmaker. Starred for Team USA at the Hlinka Gretzky Cup. Going to Michigan State

Former top pick in USHL Futures Draft, Silianoff has good offensive instincts, but has yet to put his full game together. A good skater and plays bigger than his size.

Fourth Brodzinski brother to pass through the USHL. Has scored at every level. Played in high school as an overager, but Minnesota’s Mr. Hockey has attractive puck skills.

Better on offense than in his own zone, York has a promising right-handed shot. His offensive game took off with more responsibilities after the trade from Kitchener to Barrie.

Second year eligible center had a good first year in North America. More a playmaker than a shooter, he has a good hockey IQ.

An athletic netminder with ideal size for the modern game, had a solid year in the Czech U19 league and then almost single-handedly kept the Czechs in some games at the WU18 tournament.