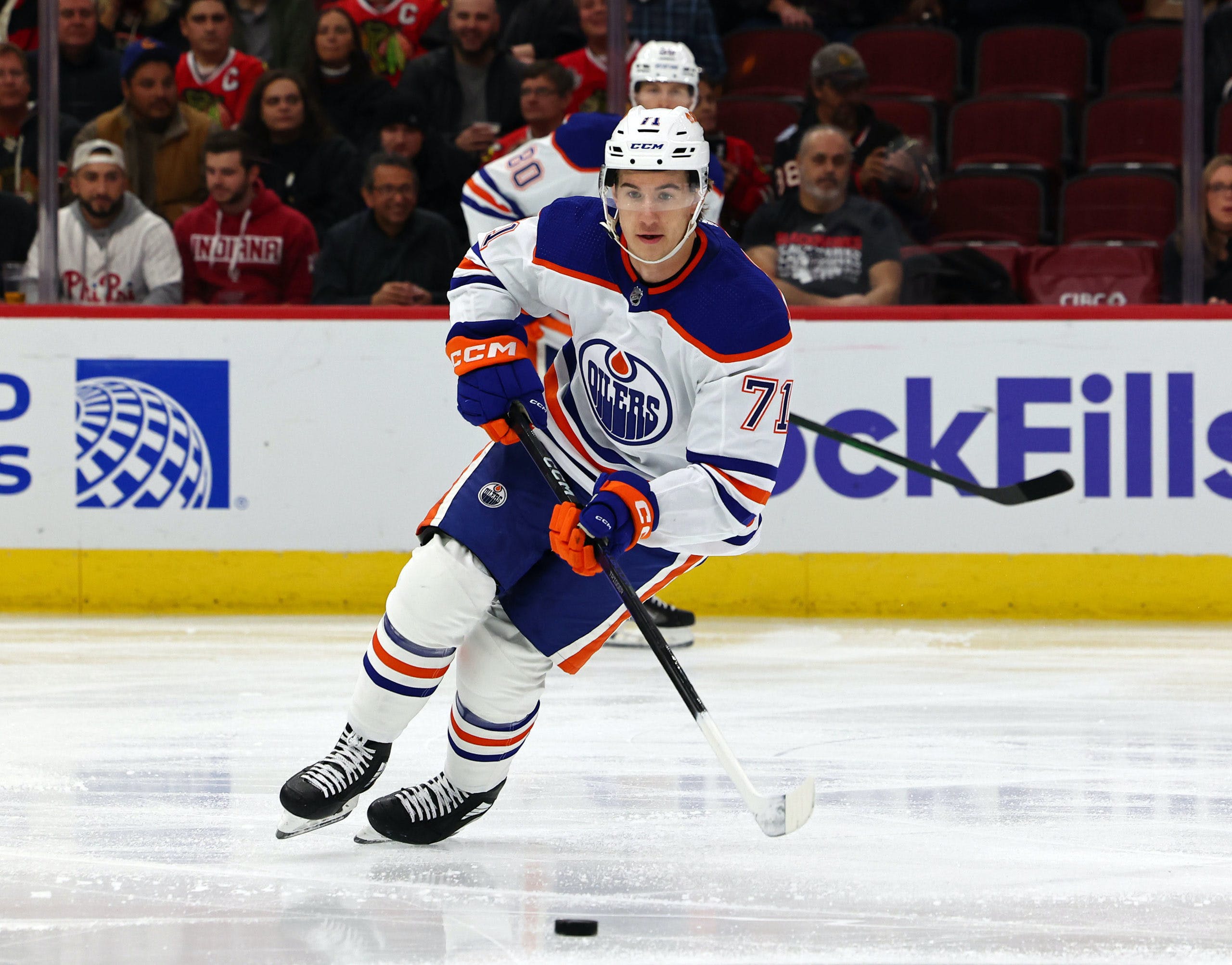 Photo credit: Mike Dinovo-USA TODAY Sports
By Zach Laing
26 days ago
Comments
Growing up, one of Ryan McLeod’s favourite players was Ryan Smyth.
And now, the latter is complimenting the former. Smytty, who the Oilers are set to honour Thursday night, said he sees a bit of himself in the third-liner.
“I don’t mind that McLeod,” said Smyth. “I wasn’t nearly as fast as McLeod, but I watched him a little bit last night and that would be one.”

The largest thing I see is both of their high hockey IQ. McLeod utilizes his speed as one of his biggest assets to get to dangerous areas in the offensive zone, and is a hound on pucks defensively. Smyth always felt the same way, but as he admitted — he just didn’t quite have the same speed.
Advertisement
Ad
Advertisement
Ad

The jokes write themselves, folks.
The Arizona Coyotes announced Thursday that Goodwill has become their helmet sponsor for home games.
As part of it, the Coyotes will have a “Round Up at the Register” program to help donate funds for Goodwill as part of the new sponsorship. Ads will appear on digital signage and players will make appearances at future opening of stores.

Should Auston Matthews have fought?

Much has been made about Auston Matthews’ exchange with Travis Konecny Wednesday night. The two players jabbed at each other, before Matthew’s Leafs teammates jumped in.
Advertisement
Ad
Advertisement
Ad
Tyler Yaremchuk and Mike McKenna discussed it Thursday on the Daily Faceoff LIve.

Mike McKenna: “[Matthews] doesn’t have to drop the gloves, but he also doesn’t have to keep poking the bear. I watched through this and I couldn’t believe my eyes at how Matthews just stood there laughing, waiting for his henchmen to come in and save him, not once but twice.

And this is the worst part. When he starts circling the drain and goes back at T.K. after everything’s done on the ice. Matthews is going at Konecny, he’s poking the bear, he’s making this situation worse, he makes it dive in yet again into bedlam.
When Konecny and Matthews start swinging their sticks at each other, whatever, they’re playing hard, Matthews doesn’t have to fight him here. But he also doesn’t have to give him a little spear in the chest. That’s what sets Konecny off, and then to watch Matthews just stand there like a tree and Giordano, who’s almost 40 years old, has to come in and save him.
I’m sorry man, if you’re Auston Matthews, I know you’ve got a surgically repaired wrist or whatever, but if you’re strong enough to pot 60 in the league, and give Konecny that kind of shove, you may have to drop them at some point if you keep doing these things. If you don’t want to be involved, then skate away, but this is a really, really arrogant look.
There’s no other way for me to describe it, to watch him laugh at the players surrounding him, just thinking ‘Ha ha ha, I’m untouchable, can’t touch me.’ I don’t know man, you do that long enough, I still think somebody in the league is going to grab him and beat the wheels off him if he’s not ready for it. At some point, that could happen!
What’s crazy though, he’s huge! Matthews is like 6’4″, 230! I actually have no doubt in my mind that if he wanted to go, he’d probably be decent at it.
I don’t know, the whole thing reeks of arrogance, and I don’t like it, because this is a team that needs some juice and jam, and not just waiting for your buddies to come in and save you. It left a bad taste in my mouth.”
Tyler Yaremchuk: “Well yeah, and that’s kind of what irritated me. I’m always a guy, when there’s a clean hit, and the guy immediately has to shed the mitts, I hate that, that drives me nuts. But in this situation, you’re right. Arrogance is a good word because he starts this little melee, and then he stands there, has no interest in helping out his teammates, and all after they come in. And then when things calm down, he starts it again, and then once again, he just stands there as Michael Bunting I think it was comes in.
It’s almost no respect for the game, no respect for your opponents, no respect for your teammates. Why are you starting that up again? They just had to come in and jump in that pile because you didn’t want to go, and now you’re willing to once the linesman have turned away, go back and start it again. I didn’t like that.”
Mike McKenna: “I’ve got one final sentence on this. I remember a guy, Eric Selleck, who I played against him one year, he had a teammate who just started everything. And you know who the teammate was? The teammate was actually Michael Bunting, and it was his first year in the American League. And I remember asking Selleck ‘how many times are you going to have to fight because of this guy?’
This is exactly what that situation felt like to me.”