Advertisement
Ad
Oilers Prospect Report: Konovalov starts in Bakersfield and McLeod is back in offensive form 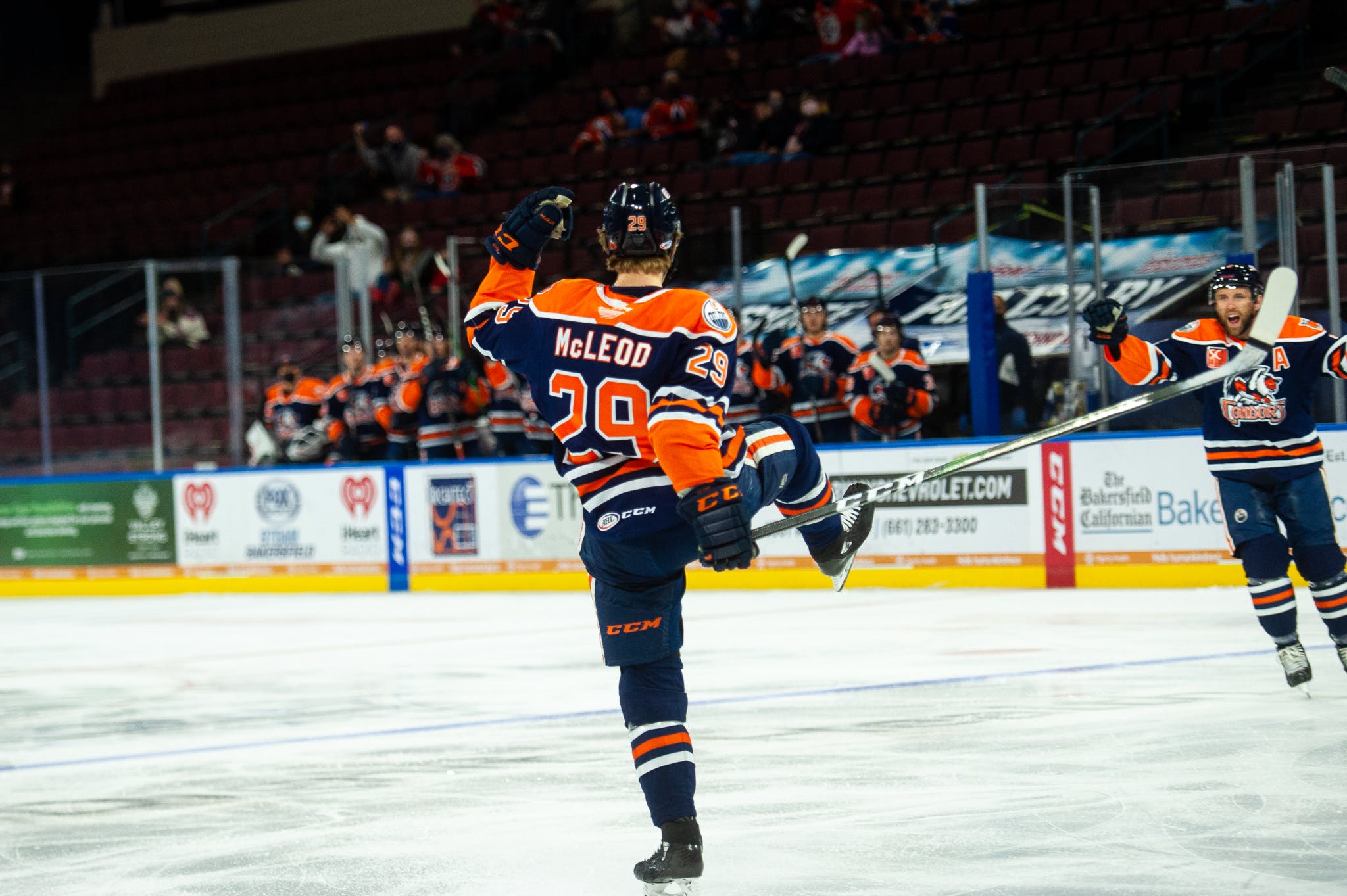 By Liam Horrobin
1 year ago
Comments
Unlike last week, nobody went nuclear-like Carter Savoie and put up a six-point game. However, there was good production across the board, with many Oilers’ top prospects contributing to their teams.
The Bakersfield Condors lost two out of three games this past week, but there were still plenty of positives to take away from it. Philip Broberg is the biggest one. The former 8th overall pick had two assists in back-to-back games against the Ontario Reign and Stockton Heat. The first was a simple pass to Seth Griffith on a 5-on-3 powerplay where Griffith did most of the work. The second came from a shot that Cooper Marody tipped home. Broberg has started his AHL nicely with three assists in five games.
Ryan McLeod is starting to show off his offensive abilities, again, after struggling to produce with the Oilers for 12 games. The former second-rounder has points in three straight games, with a goal coming against Ontario. Hopefully, McLeod can regain that scoring form he had which earned him a call up to the NHL in the first place. His speed could play a crucial role in the Oilers lineup if he can contribute offensively.
Advertisement
Ad
Advertisement
Ad

Great work by Brosseau and Schaller to set up McLeod to get us within one. #Condorstown pic.twitter.com/kmbv2RmSKk

With Stuart Skinner in Edmonton, the Condors’ crease has been left with Ilya Konovalov and Olivier Rodrigue.
Advertisement
Ad
Advertisement
Ad
Konovalov started in two games last week and came away with a 3.55 GAA and a 0.857SV%. While those numbers do not look good at all, he was unlucky against the Reign. The first two goals went in off his defenseman after he made the initial stop which was unpreventable. Unfortunately, the third one was a mistake by the young Russian goaltender after he failed to catch the shot from the point. Other than that, he played a good game, making a few great stops, resulting in him being the third star of the game. His second start was an interesting one. Two of the goals that beat him were tips, with the other two being mistakes from him. His first mistake was when he fell to the ice, and the Colorado forward took advantage, and then on the third goal, the puck went right through him like he was swiss cheese. Mistakes were made, but he showed signs of great promise, which is positive to see.
Rodrigue did okay in his lone start. He played in the Condors 4-2 loss to Stockton, in which he stopped 20 of 23 shots. He was screened on the first goal, the second was a powerplay goal, and the third was a 3-on-1.
Advertisement
Ad
Advertisement
Ad
Matvey Petrov had a fantastic weekend in the OHL. The Oilers 6th rounder grabbed himself a goal and three assists in two games. Petrov’s goal came in North Bay’s 8-5 loss to the Soo Greyhounds, along with one of his assists. He followed that performance with two assists in a 4-2 win over Soo. Those assists came on the opening goal and the game-winner. Petrov now has ten points in nine games for the Battalions.
Xavier Bourgault was held pointless on Sunday against Drummondville, which is the first time he hasn’t scored a point since opening night. However, the Oilers’ first-rounder stretched his point streak to seven games with a two-point performance against Baie-Comeau before it came to an end. The Shawinigan Cataractes forward grabbed a goal and an assist in the team’s 3-1 win. Then last night, he restarted his point streak with two assists in a 2-1 win over Quebec. Bourgault leads his team in all offensive categories with seven goals and 16 points. He’s now 3rd in the QMJHL in points and tied for third in goals. Overall, a very impressive start to the season for Bourgault as he looks to crack the World Juniors roster.
Advertisement
Ad
Advertisement
Ad
On the injury front, Dmitri Samourkov played for the Condors against Colorado in his first game back from a broken jaw. Dylan Holloway is still out with his wrist injury, and Jake Chiasson hasn’t played yet for the Brandon Wheat Kings due to an upper-body injury.

UPDATE: After suffering a broken jaw during #Oilers Rookie Camp in September, Dmitri Samorukov has been medically cleared & loaned to the @Condors! 👏 pic.twitter.com/desCZ5V2tn