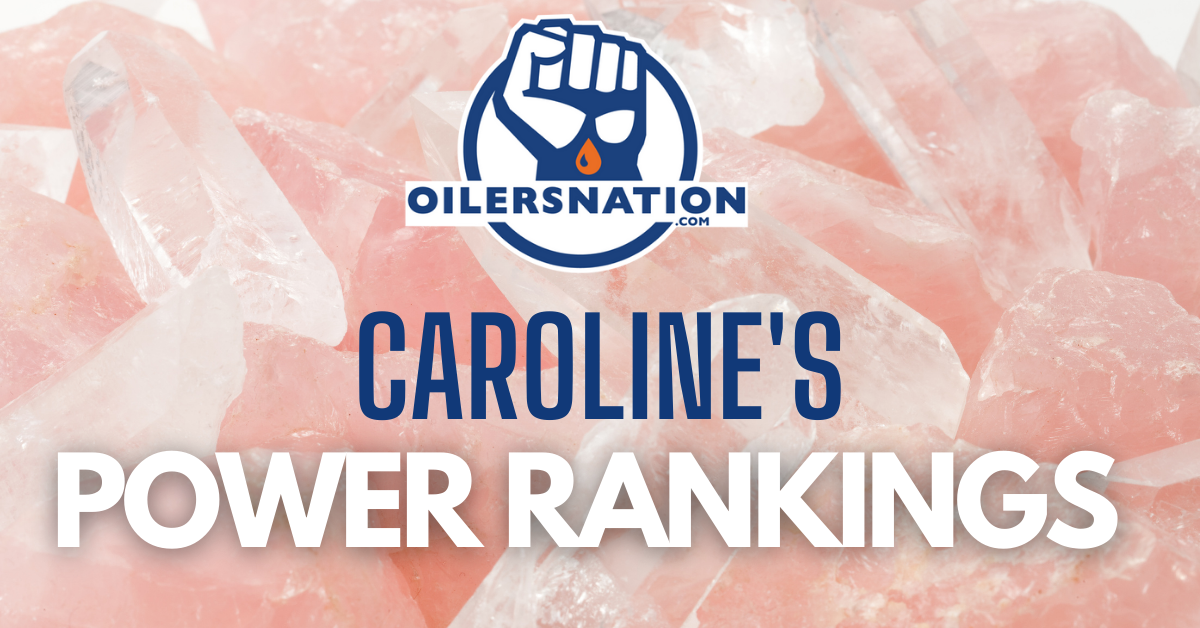 By Caroline Szwed
1 year ago
Comments
What’s going on Nation Citizens? It’s your girl, Caroline!
I’m here writing to you today because I have a confession to make. This has been weighing on me for the last couple of weeks and as a *scorpio* I have to be very honest, clear and real with you all.
Here it is:
After two weeks of Oilers hockey, I am 100% committed, sold and all-in on Oil Country. Leafs fans, if you’re reading this, a great rapper from Toronto once said:
Now, with that being said, I still work for TheLeafsnation.com so please don’t be confused or concerned. You know where my allegiance lies with this public statement.
OK! So glad I got that off my chest! It was time to clear the air. Now, let’s move onto the good stuff.
Advertisement
Ad
Advertisement
Ad
Each week I’m going to be giving my Top 5 Power Rankings from the week that was for the Oilers. These moments could be hockey related, feel good moments, Twitter interactions, basically anything that stands out. Since this is my first time doing this, I’ll combine Weeks 1 and 2 and we’ll go from here. Each new article will be released on Sunday’s and be sure to let me know what moments YOU think should be added in my Top 5.
Got it? Good! Let’s start.

One of my favourite realizations about Oilers fans is how you all we communicate with each other using GIFs. It’s truly the most beautiful love language that doesn’t exist but should.
This is when I dipped my toe in the sea of orange. I don’t think there’s another hockey fan base like the one here in Edmonton!
Advertisement
Ad
Advertisement
Ad

Okay my low key fave thing about Oilersnation is that you guys or *WE* communicate in GIFs.

Okay, so while I was watching the Toronto Maple Leafs take on the New York Rangers (stay with me here) I felt shades of boredom come over me. Since I’m a reflective person, I thought to myself, “why do I feel this way while watching hockey?” and I came to the conclusion it was because the Leafs don’t have a guy like Zack Kassian. Agree or disagree?
When I saw Kass literally rip the stick out of Sean Monahan’s hand during the BOA, I immediately thought, “yup, this is the guy” AND THEN moments later, with missing teeth, started to blow some kisses to Calgary’s bench. I mean … it doesn’t get better than that.
Advertisement
Ad
Advertisement
Ad
I know that Kassian has struggled in previous seasons with consistency but so far through Weeks 1 and 2 of this current season he has 3 goals, 2 assists and 5 points. There’s no denying that he’s been a big presence for the Oilers so far and has added that depth we love to see on a pretty impressive 3rd line. Here’s to hoping Kass has his best season yet.
Also, if you’re wondering, Zack Kassian is in fact an Aquarius. You’re welcome.

Zack Kassian is an ✨Aquarius✨ and noooo surprise here! Holding my crystals for tonight! pic.twitter.com/OemCzDv86h

Every single game day for the Edmonton Oilers, Tyler Yaremchuk and I have been and will be hosting a LIVE Giant Pre-Game Show presented by Sherwood Ford that runs on our Twitter, Twitch and Facebook channels. Basically, we’re recapping, previewing and discussing everything that’s going on surrounding our Edmonton Oilers. You can expect to see us for all 82 games and don’t tell Tyler I said this but it’s quickly becoming the highlight of my day.
Advertisement
Ad
Advertisement
Ad
My favourite part about this pre-game show, you ask? The fact that we can interact with Nation Citizens real time. We always start our show at 1:00pm so I hope you all continue to join us, ask questions, voice your opinions and of course, create the best memes and GIFs.
Here’s one that had the team and I rolling at the office (shoutout to Spiced Oil):

@tyleryaremchuk & @caroline_szwed, you knew it was coming. Also shootout to producer Liam to cutting to this gold content. pic.twitter.com/MZ8KtZyIAm

We’re McLovin’ the new guys getting their first goal as Oilers!
Starting with the one and only Warren Foegele. You just can’t ask for a better name and maybe an even better first goal as an Oiler. Foegele found the back of the net against the Arizona Coyotes in absolute fashion. This guy can skate!
Advertisement
Ad
Advertisement
Ad

.@FoegDaddy96 gets his first with the @EdmontonOilers in gorgeous fashion 👀 pic.twitter.com/MwBqjdRWRx

And as for Toronto Maple Leaf, Zach Hyman, well he wasted no time whatsoever as he scored in the Oilers season opener against the Vancouver Canucks. Hyman currently has 5 goals, 1 assist and 6 points in 5 games. He’s also scored 2 goals in back-to-back games. Wowza!
How do you think Kyle Dubas and company are feeling right now? Welcome to Edmonton, Zach!

Ummmm hello, Oilers power play! It’s no surprise that this was my No. 1 Power Ranking because… well … the Oilers power play is firing at 47.1% which is absolutely insane and everyone (even those who aren’t fans) are loving it. The Oilers lead the league in power play percentage with the Philadelphia Flyers not too far behind at 42.9%.
Advertisement
Ad
Advertisement
Ad
Even The Great One chimed in on the conversation:

Wayne Gretzky on @Sportsnet : “I’m not sure our power play in my day ever compared to what I’m seeing now.”

Connor McDavid for Vezina! Also, Connor McDavid is averaging more points in the NHL than he did in his last year in juniors. Just let that sink in.
That’s it for my Top 5 Power Rankings! Please let me know what you think and I will respond to all the comments.
It’s 5-0-0 baby! Grab your crystals and keep the magic going.