Advertisement
Ad
Part two, if you will, with Taylor Hall
By Jason Gregor
7 years ago
Comments 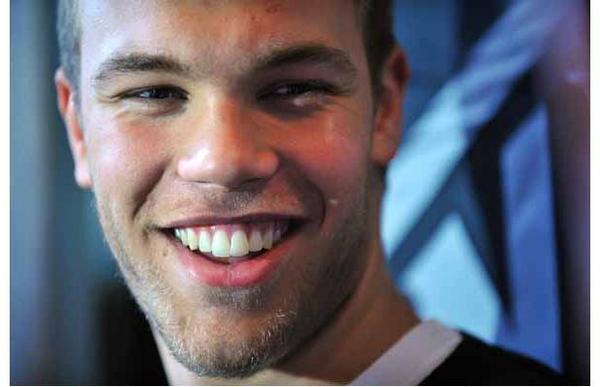 I interviewed Taylor Hall for a feature piece that ran in the Edmonton Journal yesterday. I wasn’t able to include all of his thoughts in one article. I had to leave out some good comments, but I wanted to share the remainder of our conversation.
Today, Hall shares some more insight into Todd McLellan as a coach, but I also learned more about Hall as a person, not just the player.
The one constant during our conversation was Hall’s excitement and energy burst through the phone. He sounded completely different than the young man who spoke
to the media at the conclusion of the Oilers season. Confidence and the mental
side of the game are often undervalued. Even the best players in the world
lose their confidence. Steven Stamkos, one of the best goal scorers in the
game, had no goals in the first eight playoff games. He was struggling, but
after scoring vs. Montreal
in game two he has seven goals in his past eleven games and once again looks like an elite scorer.
Advertisement
Ad
Advertisement
Ad
Five years of losing will eat away at you,
but one small stint of success can erase those memories quickly. That seems to be the case with Hall. He rediscovered the fun of hockey while playing in Prague.
What did Hall learn playing for Canada
that he hopes to bring to training camp next year?
“Just that it was a collective effort. I
think Todd [McLellan] did a really good job of making sure everyone not only
had a role, but knew what it was and knew how to excel in it. There were guys
that were not playing as much as they were used to on their club teams, but
everyone felt important in their role and everyone felt like what they were
bringing to the team was something that was important. I think you’ve got to
bring guys into the fire, make sure you make guys feel important and I think
that everyone really did feel like that in Prague,” said Hall.
Advertisement
Ad
Advertisement
Ad
In yesterday’s article, Hall mentioned how prepared McLellan was as a coach and that was a theme throughout our 25-minute conversation.
One of the best compliments a coach can
receive from a player is that he is prepared. NHL players are robotic by
nature. They like routine. They are conditioned to absorb the information they
receive from the coach and then put it to use on the ice. If players don’t feel
prepared prior to a game, they rarely play up to their full potential because
they are thinking more than reacting.
McLellan’s preparedness wasn’t the only
trait that grabbed Hall’s attention.
Hall has only been in the NHL for five
seasons, but he’s a wily veteran when it comes to learning how to play for a
different coach. McLellan will be his fifth head coach, but Hall won’t need
significant time in training camp or the preseason to understand how his new
coach thinks. He knows what to expect, and I asked Hall what aspect of
McLellan’s coaching strategy impressed him the most.
Advertisement
Ad
Advertisement
Ad
“I’d say the amount of attention that was
put into being above the puck and being in front of the puck in the offensive
zone. As soon as the puck was turned over, or we didn’t have a hundred percent
possession, we were told to get above the puck and get inside position on their
guys so we can outnumber them in any situation. If they turned the puck over
then we’re in the spot to produce offense immediately. He was strict about
playing that way, but he also explained it in a way that was easy to understand
and implement on the ice,” answered Hall.
Again, Hall’s excitement about his new coach seemed to match his renewed excitement about the game. Five years of losing, and losing horribly, will break down the will of any athlete. Winning a gold medal and being a main contributor to the championship was a huge boost for Hall’s psyche.
Advertisement
Ad
Advertisement
Ad

During the past five seasons, I’ve noted how the frustration of losing caused some fans to attack the personalities of players, not just their play on the ice. I’ve felt one of the biggest mistakes we make when watching pro sports is forgetting the athletes are human. They are great athletes, but that doesn’t mean they are immune to the same struggles of every day people.
People judge athletes and think they know them because they watch them on TV or follow them on social media. That isn’t the case. I’ve covered teams for 14 years and I’d say I truly know maybe 5-10 players in a way where I really got a sense of who they are as a person, not just a player.
Hall arrived in Edmonton a young, excited and confident 18
year old. He was supposed to be the saviour of the franchise; the first ever #1
overall pick. Some expected him to carry the Oilers back to the playoffs, and
when winning didn’t occur, the pressure mounted and at times Hall admits it was
hard to deal with.
Advertisement
Ad
Advertisement
Ad
“I think as you get older you start to kind
of fit into your personality and you start being the person that you’re going
to be for the rest of your life. I think that that is happening with me. I’ve
played five years in the NHL, but I’m only at the age where most people are
just graduating from university. I’m still learning about myself. All of the
losses that we’ve had in the last five were frustrating. Maybe other guys would
have lashed out in the same way that I did a couple of times, maybe they
wouldn’t, but that’s the way that it goes. I’m starting to learn that sometimes
you just have to relax and let things happen as they do. A good example for me
has been the last month for our team. Things are going to work out and I see
that now,” said Hall.
Advertisement
Ad
Advertisement
Ad
Patience rarely comes easy to anyone, but
when you are young and the face of the franchise in a hockey-crazed market it
can be even harder to obtain. Hall has worked on finding the right balance of
passion and patience.
“I try to play with a lot of passion. I
think it is important to play with emotion, but you want to make sure you’re
not going over the line. I think that’s what I’ve gotten better at. Certainly
in public I’m a lot more shy than people think, especially when people come up
to me that I don’t know. I’m not the type of person that’s going to have a
twenty minute convo. That isn’t an easy thing for me, but as I get older I find
I’m getting better at those types of things.
“I’ve heard people say they think I’m
arrogant or a snob and that used to bother me, because I’m not that person. I’m
reserved around people I don’t know; even when I went to the Worlds the first
time I was shy. I’ve gotten better at letting my guard down, but I’ve also
learned you have to be true to who you are and not worry what strangers say
about you,” said Hall.
Advertisement
Ad
Advertisement
Ad
When Hall was injured last year we watched one game on TV together. I wanted to ask him about what he saw, and more so what I didn’t catch during the play. It was a valuable learning experience for me, but during intermissions and after the game we talked about non-hockey things. I left that evening knowing more about who Hall was as a young man. He is naturally shy, closer to an introvert than an extrovert, and because of how demonstrative he is on the ice, I think some people expect he will be the same way off the ice. He isn’t.
The harsh reality of playing in a hockey
market is players have to mature in the public eye. Young NHL players are
expected to make the right decision on and off the ice all of the time, and
frankly that isn’t realistic, especially when you are 18-21 years of age. Hall
and his other young teammates have had to mature in losing environment. It
wasn’t easy, but with all the changes during the past six weeks the fanbase, the players and the entire organization are hopeful the worst is behind them.
Advertisement
Ad
Advertisement
Ad
Hall, like every fan, was excited about the arrival of McDavid. “We played against Jack Eichel, and he was impressive. Everyone seems to think Connor is even better, and that is exciting. I’m looking forward to meeting him and playing with him, and helping him out off the ice if he needs it. I’ve learned a lot about myself the past five years and how to deal with adversity, and hopefully he won’t have to experience as much losing as we did in my first few seasons,” joked Hall.
The major advantage McDavid will have upon his arrival in Edmonton, is he’ll be able to play with Hall. A top-end offensive player with five years of NHL experience, but also a player who has the understanding of what it feels like to be looked upon as the saviour for an organization.
Advertisement
Ad
Advertisement
Ad
McDavid will learn from Hall and Hall will study some things from young McDavid. Both will be extremely excited when they arrive for training camp.
McDavid is going to be stoked playing in the NHL. Hall will be energized by the thoughts of being on a competitive team again, and filled with the belief he is more prepared to help lead the team on and off the ice.
Recently by Jason Gregor: