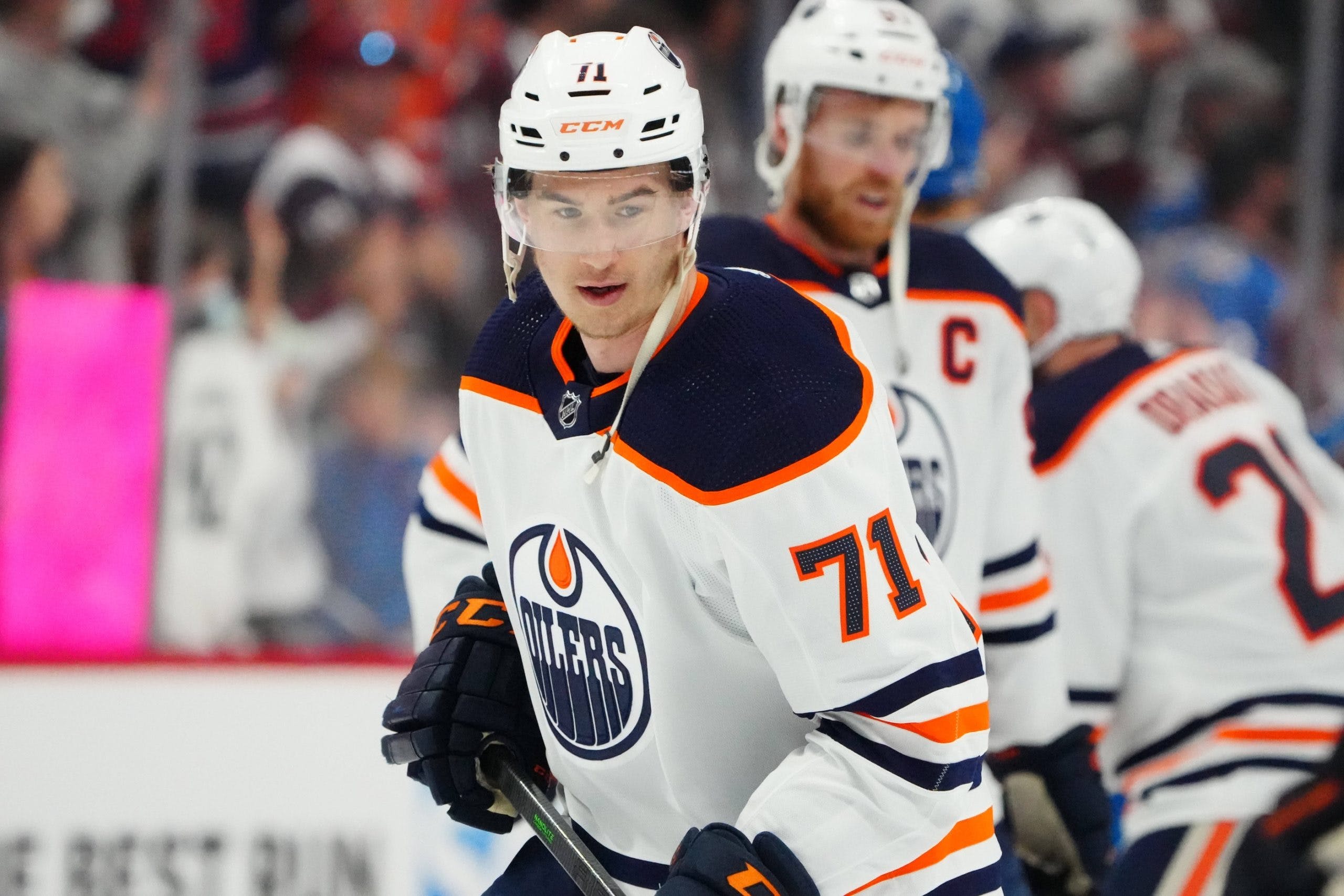 Photo credit: Ron Chenoy-USA TODAY Sports
By baggedmilk
2 months ago
Comments
We’re only one sleep away from the first Oilers pre-season game of the year, and the resulting excitement means another round of Random Thoughts is rolling around in my head that I need your help with figuring out.

I assume a lot of you were feeling as pumped as I was on Thursday morning when news broke that Ryan McLeod had signed a one-year deal worth only $798K. As far as team-friendly deals go, this is about as cordial as it gets for a guy that will be filling an important role either at 3C or on the wing, and I’m pretty damned excited to see what he does with the opportunity. For me, McLeod is a player with all kinds of tools in his kit, and it’s been fun to watch him use those tools to figure things out a little bit more with each passing game. In fact, the 23-year-old flourished after Woodcroft replaced Tippett and I’d bet Gregor’s money that progression will only continue in his second full year in the bigs. Not only that, signing a one-year deal is a solid bet on himself — I know the cap situation forced their hand here — that he’ll be able to keep the good times rolling and maybe cash in a bigger contract next summer.
Advertisement
Ad
Advertisement
Ad

I HAVEN’T LAUGHED THIS HARD IN A WHILE

which one of you with a fake jim matheson account did this 💀 https://t.co/ZWXC6gxTE4 pic.twitter.com/Bia6ZwfQO6

If you don’t have Twitter, it’s hard to accurately explain how many fake Jim Matheson accounts are floating around, and how often these fake accounts tweet things that look like it could have come from the real guy. Well, this past week, the Switzerland Times got bamboozled by a fake Jim and the result is one of the funniest things that I’ve read in quite some time. As you can see in Zach’s tweet above, the writer was asking for feedback on Mikko Koskinen and the nonsense that supposedly came from “Jim Matheson” to describe Kostco’s time in Edmonton is so stupidly hilarious that I am stunned anyone would take it seriously. I mean, goalie coach “Bofa Deese?” I was howling. Now, to be fair, I understand that there’s a language gap here and that something was certainly lost in translation (I hope), but the fact that someone thought that Matty would legitimately remember Mikko most for his love of the Cheesy Gordita Crunch is so ridiculous that I legitimately laugh out loud for way too long when I saw this. Absolutely hilarious.
Advertisement
Ad
Advertisement
Ad

Oilers players had input on the jerseys. Message from them was no more orange jerseys.

I swear to Gord that I didn’t plan on talking about the Oilers jerseys again this week, but when I saw this tweet from Reid Wilkins that basically confirms that the players didn’t like the orange jerseys, I had to include a few words to express how happy and vindicated I felt when I read this information. For the past six years, I’ve been sitting in quiet protest about the orange jerseys that I didn’t really like — I even own two of them because I’m an idiot — and to hear that the players felt the same way makes me feel like we’re all on the same side somehow. It felt like my impeccable sense of style is something that was shared by the Oilers and that imaginary affirmation was the mid-week pick-me-up that I needed at that moment. To hell with the orange jerseys. Can I say that? I guess I just did.
Advertisement
Ad
Advertisement
Ad

Nolan Patrick, Robin Lehner & Shea Weber will not play in the 2022-23 season.

Anytime we talk about the Vegas Golden Knights on Oilersnation Radio, I always say that I don’t think they’re going to be all that good again this year, and this news that they’ll be without both Robin Lehner and Nolan Patrick for the whole season further reaffirms my take. It’s not that Vegas doesn’t have a bunch of good players — they’ve got plenty of weapons up front and on the back end — but they’re already running into the kind of injury and cap issues that could make this another long season for them. That said, I also understand that my general dislike of the Golden Knights could be affecting my judgment here, but I truly believe that they’re going to be in trouble this season more so than they will be in contention. And seeing as Vegas has mostly had nothing but fun since they came into this league, I’m thinking that a little run of hardship could be exactly what the doctor ordered. Sorry, Jack.
Advertisement
Ad
Advertisement
Ad

As much as I despise the team down south with a hateful passion, this clip from Darryl Sutter that made the waves around social media about Tyler Toffoli vs. Matthew Tkachuk did make me laugh out loud. When asked how the two guys compare, Sutter stated correctly that one of them has multiple Stanley Cups while the other does not, and I absolutely guarantee that this was not what the journo that asked the question had in mind and that’s why you can’t help but love the guy. Seeing as hockey is entertainment for all of us, having doses of personality from guys like Darryl Sutter makes the sport more fun to watch and I think it’s fun to have non-stock answers like this one come out.
Advertisement
Ad
Advertisement
Ad

I know that the pre-season is going to annoy me quickly seeing as we’ve got eight games to get through before the real dance gets started, but that doesn’t mean I’m not excited about watching the Oilers play tomorrow against Winnipeg. Besides, how are we going to crown a winner for the Ty Rattie Award if we don’t get this show on the road?

Oilers training camp is underway and that meant there was a lot for me to talk about on this week’s episode of BLTN. Not only that, but I also recorded a reaction episode of the podcast after news broke that Ryan McLeod had signed a new, one-year deal worth $798K. Subscribe to Better Lait Than Never for FREE on Spotify, Apple Podcasts, Google Podcasts, and wherever else you get your podcasts.
Advertisement
Ad
Advertisement
Ad