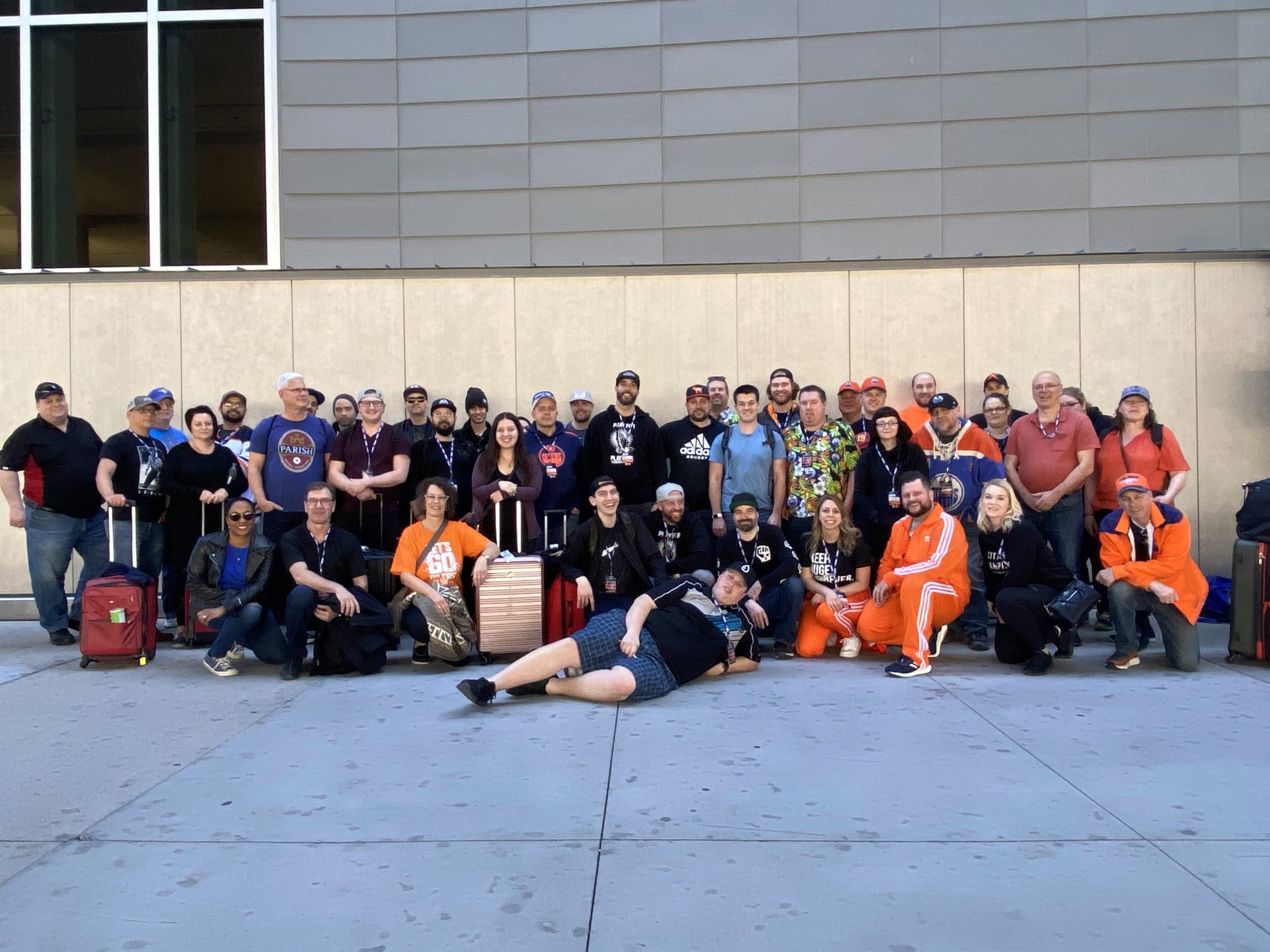 By baggedmilk
2 years ago
Comments
No matter what time of year it is, there’s always something about a trip to Las Vegas and that sentiment is compounded when you make the journey with a big group like we did for the second annual #NationVacation.
Last year over the St. Patrick’s Day weekend, we made our way down to Vegas with a small group of Nation citizens to watch our beloved hockey squadron do their thing for the first-ever #NationVacation, and after having such an amazing time, we just knew that we needed to do it all over again. So on Tuesday, February 25th, we rounded up another fine group of citizens to fly with us down to Vegas for three days of shenanigans. Is there anything better than a trip to Las Vegas with 54 of your closest Internet friends? No, no there is not.
Advertisement
Ad
Advertisement
Ad
After an early morning, a few beers at the airport Chili’s, and a quick layover in Vancouver, we finally got down to Vegas with just enough time to get ourselves changed and down to the PBR Bar where we were holding a watch party for the game against Anaheim. Incredibly, Nation citizens that were both on the trip or just happened to down in Vegas flooded the place to the point of packing the side they had set aside for us. For a Tuesday night, we had that place hopping and it was unbelievable to look around and see the array of orange jerseys and NationGear filling the bar. Actually, it was almost overwhelming to watch as so many great people were interacting and having a blast with folks they had just met, all because of the membership they have in this incredible community.
As you’ll see in the video below, the Nation certainly travels well…

Take over a bar on the strip they said.

It’d be fun they said.

We also love a good chant, ya know?

Throwback to when Tyler Ennis scored his first goal as an Oiler. #NationVacation @AMATravel pic.twitter.com/nDIAsdXTkm

Despite the loss, everyone was in good spirits and we all spent the bulk of the evening shooting the breeze, talking strategy, and riding a mechanical bull before disappearing into the night to “season” our bodies for Wednesday’s contest. So when it came time to pregame at BeerHaus, the group was properly hydrated, full motivated, and ready to go for another round.
Advertisement
Ad
Advertisement
Ad

What else did pregaming beyond drinking our weight in beers entail, you might ask? How about a high five line that seemed to go on for miles?

After countless high fives and fist bumps, we finally made our way to T-Mobile arena to take in the game and cheer our boys on

It goes without saying that this game did not go as we had hoped but that didn’t stop us from having a great time anyway. One of the nice things about being on the Flight Deck, the area where we were all set up to watch the game, was the ability to wander around and mingle with the people on the trip. Not only were the beers cold and the Mac n Cheese delicious, but it was the group that really made this night special. For me personally, I had so many hilarious conversations that almost made me forget about the shutout and it was yet another reminder how many great people came with us. I mean, who else would come up with the idea to sing ‘Happy Birthday’ to Gene Principe between plays?
Advertisement
Ad
Advertisement
Ad

When it was time to go home, it was funny to look around the bus/shuttle and see all of the tired eyes and hungover faces, and knowing that it was another successful trip. As I mentioned already, it was almost overwhelming to be a small part of such a wonderful group, and I’ve spent the past few days thinking about the trip and letting it all soak in. Without all of you heroes, this trip never would have happened and I wanted to take a few minutes to let you know how grateful we all are that you chose to participate. Not to mention, how hilarious was it when we were all at the airport for layover 2.0 when Calgary lost in overtime and the resulting cheer that exploded from everyone that was there watching? Classic.
Advertisement
Ad
Advertisement
Ad

On behalf of all of us here at the Nation, I wanted to extend a massive thank you to everyone that joined us down in Las Vegas and for giving us such a special few days. I also want to thank AMA Travel for all of the hard work and coordination that made the trip possible and Park2Go for taking such good care of our vehicles while we were away. Every single one of you fine folks made the trip an incredibly special experience and I cannot wait to do it all again next year. Thank you, Nation! You’re the greatest human beings on earth.