Advertisement
Ad
The Day After 3.0: Despite valiant effort, Oilers fall 4-2 to Sabres 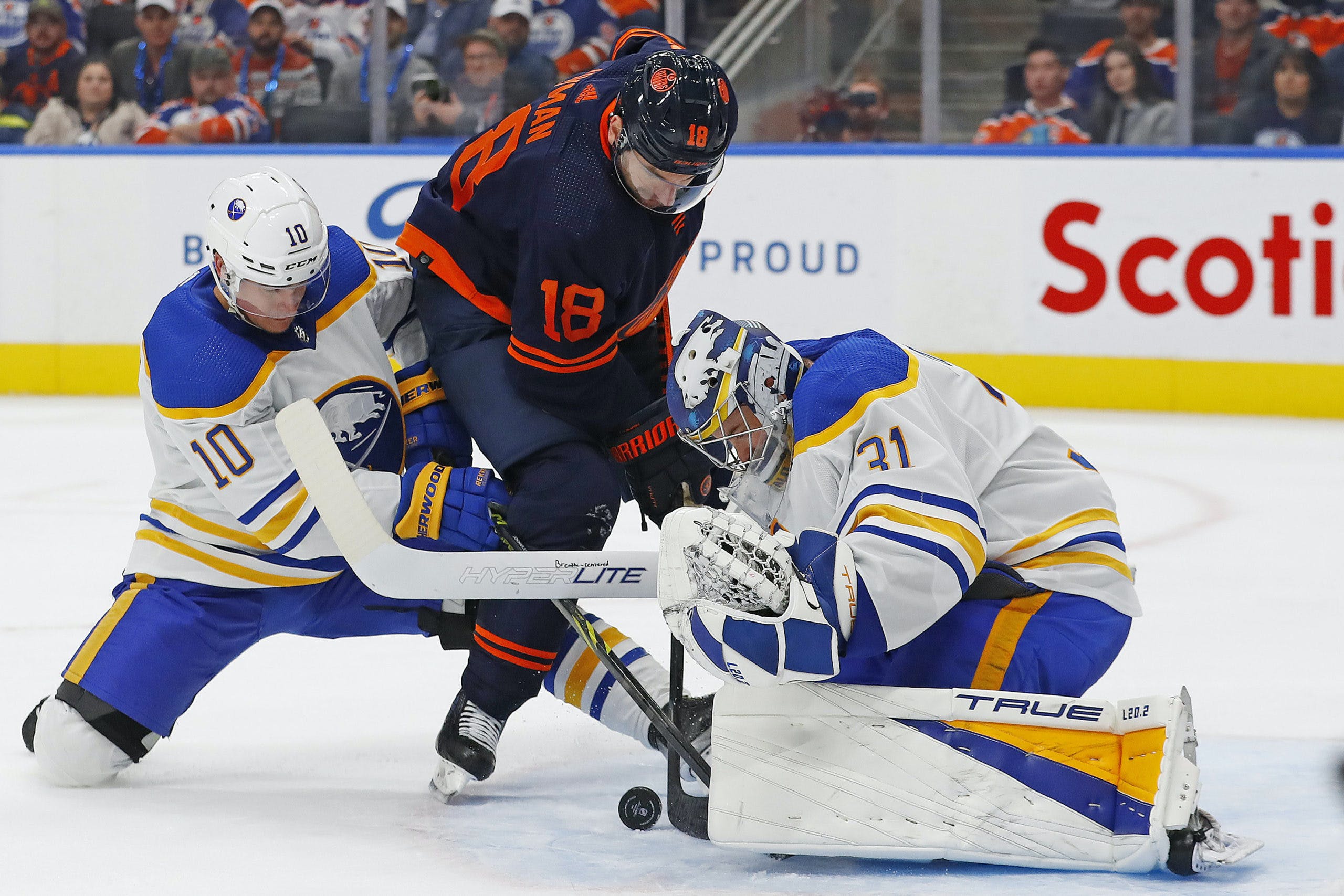 Photo credit: Perry Nelson-USA TODAY Sports
By Zach Laing
3 months ago
Comments
I’ve been watching hockey for nearly 20 years now. I’ve seen a lot of games, good and bad. A lot of seasons, good and bad.
And the Oilers are off to a slow start. Understandably, there are some that are feeling tepid right now. It makes sense.
You’d want to see the Oilers come hot out the gate this regular season. Despite a comeback game one win against Vancouver, the Oilers weren’t able to do so against the Calgary Flames, or the Buffalo Sabres last night falling 4-2.
It’s not time to panic, however. Far from it.
Look at the Colorado Avalanche last season. They started their season by going 1-2 in their first three games. In their first six, they went 2-4!
The 2019-20 Tampa Bay Lightning? 1-2 in their first three.
The 2018-19 St. Louis Blues went 1-2 in their first three games and by Christmas, well by gum, they were a measly 14-16-4 and one of the worst teams in the NHL.
Advertisement
Ad
Advertisement
Ad
Three of the last four Stanley Cup-winning teams had slow starts.
I’m not saying the Oilers will be cup winners, but you get my point.
Rasmus Dahlin opened it up on the powerplay with a long wrist shot, but Darnell Nurse got it back 23 seconds later. When Tage Thompson drove to the Oilers’ net 44 seconds into the second, it was Nurse who lost the body battle in front of the net allowing the big forward to deke Stuart Skinner with ease.
JJ Peterka scored four minutes later, and it was an early nail in the coffin.
The Oilers? They couldn’t get out of their own way. They fired 48 shots to the Sabres’ 24 by the end of the night, but according to Natural Stat Trick they only had 11 scoring chances to the Sabres’ 18. That changed in the third quite heavily when the Oilers out-chanced them 16-6, but too little too late.
Advertisement
Ad
Advertisement
Ad
In front of the net, nearly every player panicked when the puck was near. Connor McDavid, Leon Draisaitl, Kailer Yamamoto, Zach Hyman, Ryan Nugent-Hopkins — and don’t get me started on the blunderous game Evander Kane had.
It doesn’t help that Edmonton boy Eric Comrie, half-brother of Mike, put on a show for the Sabres looking virtually unbeatable.
As a whole, the Oilers were just trying to just do too much. Plenty of players, McDavid included, were dropping passes to nobody. Too many loose pucks didn’t find their way into the net.
It’s a frustrating way to begin the season, but if there’s anything we should be taking away it’s that the Oilers need to find their confidence. It’s lacking.
They need to remember how to play the type of game they did late in the season and into the playoffs that berthed them to the Western Conference Finals. They need to remember they’re a damn good team.
Advertisement
Ad
Advertisement
Ad
We can’t use the argument of a new team trying to gel because the only fresh faces on the team are that of Ryan Murray and Jack Campbell — few enough players that there aren’t chemistry issues with this club.
A quicker start and a few goals will go along way Thursday when the Carolina Hurricanes come to town.

the goat has returned 👑 pic.twitter.com/JM9je2y8YH

some rough stuff early between the oilers and sabres. pic.twitter.com/jAQVH7cCJs

but 23 seconds later, darnell nurse strikes back and it's a 1-1 game. pic.twitter.com/9TgP5Fsgo1

tage thompson drives to the net and scores a beauty. sabres take a 2-1 lead. pic.twitter.com/aVtim61UhR

the pass from warren foegele was… not great. put holloway in a bad spot here. pic.twitter.com/xHernvMzDV

here are a few more angles of the lybushkin hit on holloway. pic.twitter.com/5h1QIGfuzf

with the net empty, the oilers bang away at a loose puck and ryan nugent-hopkins makes it a one-goal game. pic.twitter.com/8H2x26x7PJ