Advertisement
Ad
The Day After -6.0: Welcome to the Edmonton Oilers, Dylan Holloway 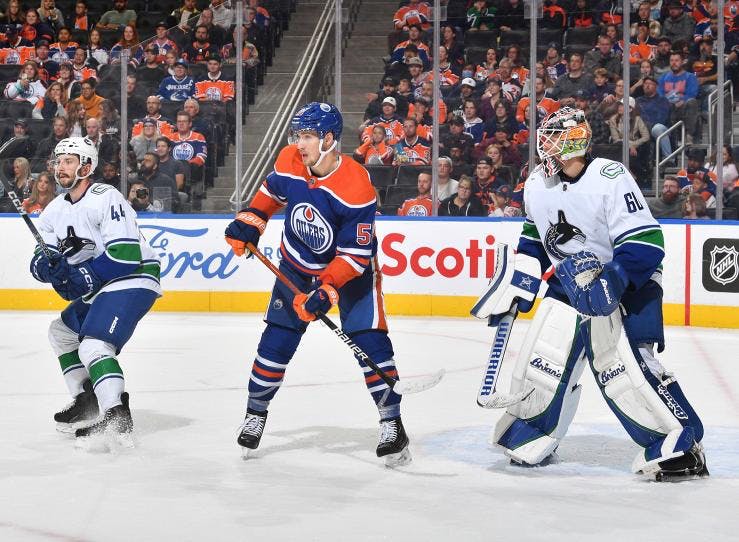 Photo credit: Andy Devlin/EdmontonOilers.com
By Zach Laing
1 month ago
Comments
If there was ever any doubt about Dylan Holloway making the Edmonton Oilers, that’s all been thrown by the wayside.
‘Hollywood’ Holloway led the way Monday night in a 7-2 Oilers victory against a heavily under-matched Vancouver Canucks club by scoring a hat trick.
His first opened the game, while the second extended the Oilers’ lead in the second. His third goal came in the third frame and helped put the game out of reach for the Canucks.
Sure, it came against a Canucks club that featured next to no actual NHL’ers, but when we talk about preseason hockey, we talk about seizing opportunities. These are exactly the games where players trying to earn a spot, much like Holloway, need to step up and shine.
He did exactly that and then some.
Advertisement
Ad
Advertisement
Ad
“It felt really good, it was kind of one of those nights where everything went right,” said Holloway of his goals. “I owe a lot to my linemates, two pretty good players in Leon and Hyms.”
Holloway is here to stay. It’s not just the goals that were impressive, either. Of his seven shot attempts: five of them hit the net, four were scoring chances and three of those came from high danger areas. He also drew a penalty, was credited with drawing one penalty and laying three hits — the most of any Oiler not named Evander Kane.
At 5×5 this preseason, nobody in the entire NHL has scored more goals than Holloway. He’s making an impact already and while he played lots with depth players leading into this game, he looked tremendous playing in a top-six role.
Advertisement
Ad
Advertisement
Ad
Far from a negative way, but Dylan Holloway is throwing a bit of a wrench in what the opening lineup could project to be. Our friends at DailyFaceoff don’t have him projected to make the Oilers’ top 12, but it’s clear he’s better than a number of players in that group. He easily beats out the likes of Mattias Janmark, Devin Shore, and Derek Ryan. While I’ve been impressed with Warren Foegele’s game, Holloway’s performed better than him so far, and I think he’s even had a better camp than Kailer Yamamoto. There could even be a world where he knocks Jesse Puljujarvi down the depth chart.
There’s a world where Holloway could be a legitimate top-six player to start the year. He plays the game in all the right ways and there seemed to be instant chemistry alongside Leon Draisaitl and Zach Hyman, who also had a great night scoring a goal and adding two assists.
Advertisement
Ad
Advertisement
Ad
Whether Holloway is in the Oilers’ top-six, or playing on the third line, it’s clear he knows what he needs to do to be effective on the ice. These last two preseason games — played Wednesday against the Canucks in Abbotsford, and Friday night at home against the Seattle Kraken — will determine just how the opening day roster shakes out.

this is… a brutal penalty from jake virtanen. pic.twitter.com/qecXjld1Gi

zach hyman in the office and it's a 2-1 game. pic.twitter.com/pfWAHDlh4I

conor garland gets credit for this goal the oilers will want back. edmonton still leads 3-2 pic.twitter.com/XOt9VhNtrO

two quick ones from warren foegele, and the oilers are playing la bamba! pic.twitter.com/1s87B73Xks

here's a look at all three of dylan holloway's goals. pic.twitter.com/WQLGTSk2Wq