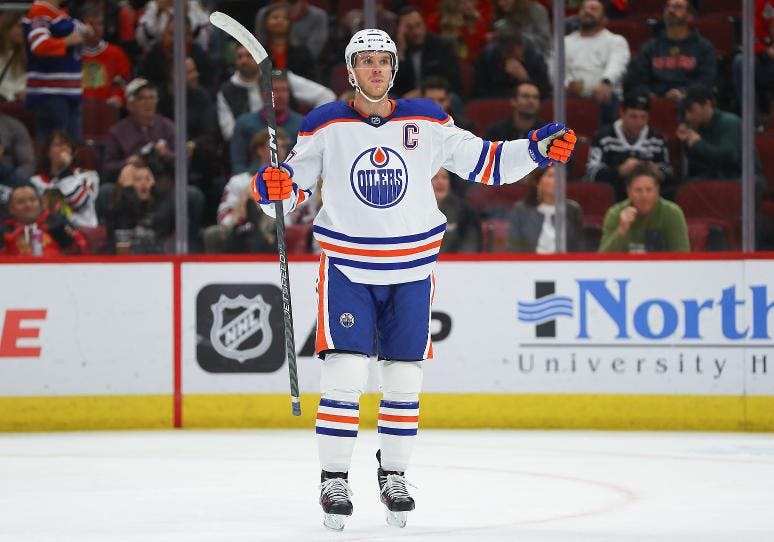 Photo credit: oilers.nhl.com
By Zach Laing
3 months ago
Comments
The Day After is brought to you by NHL Lines site Betway!
A Connor McDavid hat trick helped lead the way for the Edmonton Oilers as they mounted three comebacks to beat the Chicago Blackhawks Thursday night.
The Oilers battled back from 2-1, 3-2 and 4-3 deficits and got some big goals in big moments.
Zach Hyman broke open the scoring halfway through the first before Connor McDavid notched two tallies in the second period. Ryan Nugent-Hopkins scored 24 seconds into the third period and then halfway through that frame, McDavid used a screen from a defenceman to snipe home his hat trick goal.
With 37.6 seconds left on the clock in the final frame and the game tied at 5, it was the birthday boy — Leon Draisaitl — who scored his fourth goal of the year to give the Oilers a victory.
Advertisement
Ad
Advertisement
Ad
There was much more to talk about through the game that saw 17 powerplays and 40 penalty minutes divied up.
Let’s take a look at all the highlights from that crazy affair down below.

reese johnson makes it a 2-1 game for the blackhawks. caleb jones (because of course) gets an assist. pic.twitter.com/CcmAfRN0lN

oh boy, what a goal from connor mcdavid. 2-2. pic.twitter.com/6ISECehm5N

things getting chippy between the oilers and blackhawks. pic.twitter.com/DdIHDHMu9p

connor mcdavid is cooking. the oilers tie this game up at 3. pic.twitter.com/6v3lNsABfe

"the call on the ice is no goal" pic.twitter.com/oXTDSS0JCh

stay hot ryan nugent-hopkins! he ties this game up at 4. pic.twitter.com/0EX7iol17r

connor mcdavid are you kidding me?!?! what a way to score a hat trick! pic.twitter.com/Yyn2Hz4rCz

the birthday boy scores with 37.6 left in the game!! what a goal from leon draisaitl. pic.twitter.com/EEZ1MbGdSa