Advertisement
Ad
This Week in the NHL: Week Four 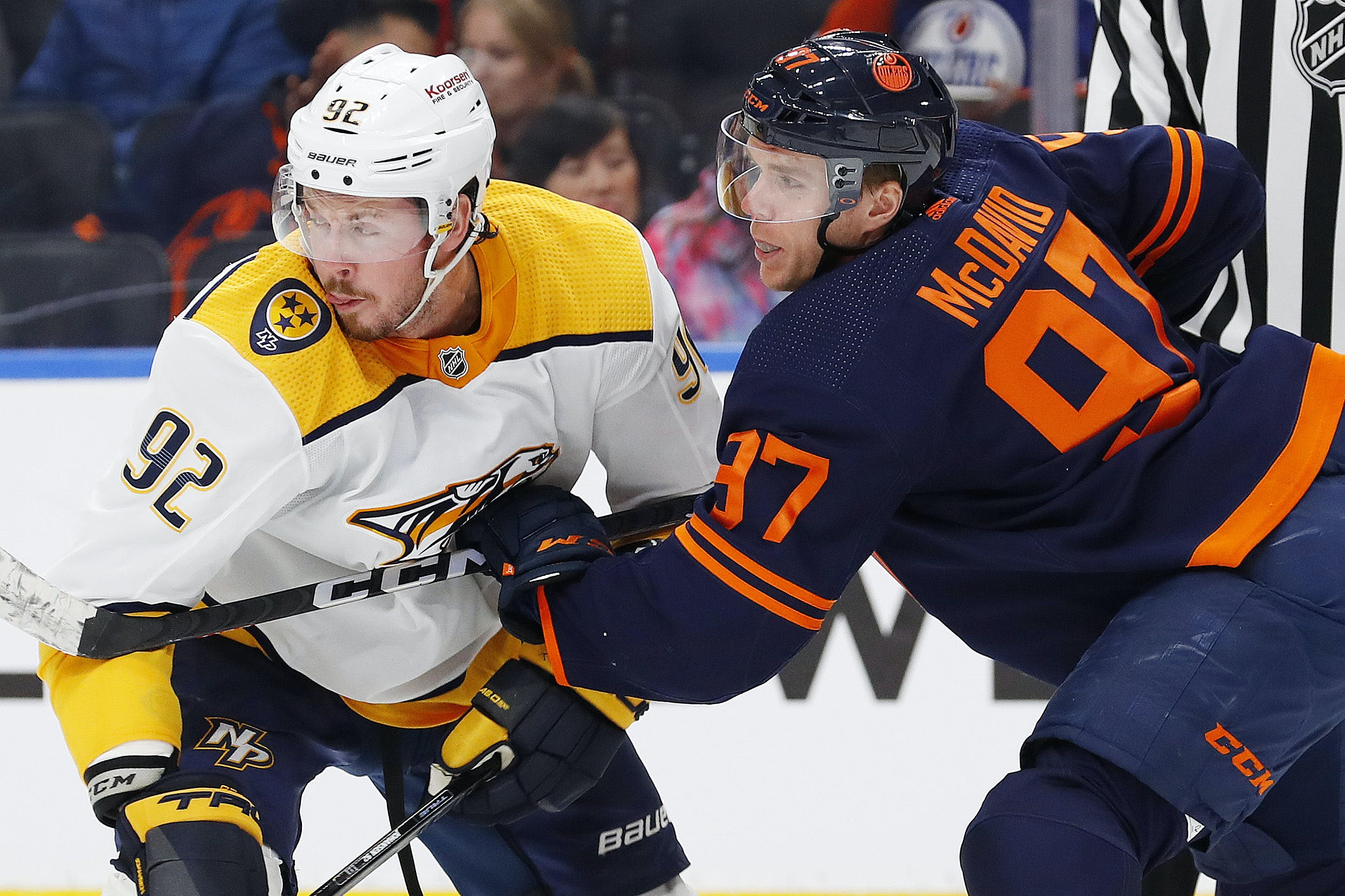 Photo credit: Perry Nelson-USA TODAY Sports
By Jason Gregor
1 month ago
Comments
We are now four weeks into the NHL season. This article focuses on what happened the past week from Friday, October 28th to Thursday, November 4th specifically, with some thoughts on the first month of the season in general.
Once again there were no shortages of stories.
— Skaters of the week:
1. Tage Thompson scored 6-5-11 in three games for the Sabres including his first six-point game.
2. Erik Karlsson tallied 6-3-9 in three games for the Sharks. He now has 10 goals in 13 games, which is a modern-day NHL record for fewest games to reach 10 goals by a D-man. The only others quicker were Harry Cameron (7 GP in 1917-18 with Toronto Arenas) and King Clancy (9 GP in 1929-30 with the Ottawa Senators).
3. Connor McDavid produced 4-5-9 in three games for the Oilers. He has 12 goals and 24 points in 11 games.
Advertisement
Ad
Advertisement
Ad
Honourable mention to Bo Horvat (6-1-7), Jason Robertson (4-3-7), Leon Draisaitl (2-5-7), Brock Nelson (5-2-7 in four game) and rookie Andrei Kuzmenko (4-2-6) for recording his first NHL hat-trick.
— Goalies of the week:
1. Vitek Vanecek stopped 62 of 64 shots (.969Sv%) with a 0.79 GAA and went 3-0 for the surging New Jersey Devils. With McKenzie Blackwood’s leg injury last night, Vanecek will become the main guy for the immediate future.
2. Ilya Sorokin was stellar again stopping 86 of 91 shots and going 3-0 for the Islanders.
3. Logan Thompson continues to play well, and he too went 3-0 and stopping 90 of 96 shots.
Honourable mention to Ville Husso and Martin Jones who also went undefeated. Jones stopped 54 of 55 shots in two starts, while Husso stopped 63 of 65.
Advertisement
Ad
Advertisement
Ad
—  Hot Teams:
The New York Islanders found their game going 4-0 and scoring 19 goals. New Jersey and Vegas also went 4-0 and outscored teams 17-6 and 14-7 respectively. The Buffalo Sabres and Boston Bruins continued to roll going 3-0, while the Seattle Kraken are much improved and also went 3-0.
— Cold Teams:
Calgary lost all three games on home ice and were outscored 12-7. Their PP went 0-for-10.
St. Louis went 0-3 and were outscored 17-7. The Blues started the season 3-0, but they’ve lost six consecutive games in regulation since.
Pittsburgh continued their slide going 0-3-1 and were crushed 20-10 on the scoreboard. The Penguins started the season 4-0-1 but are 0-5-2 since. Sidney Crosby had 10 points in the first five games, but only has two in their seven-game winless skid.
Advertisement
Ad
Advertisement
Ad
Columbus and Colorado lost both their games, and then had to fly to Finland where they will play each other twice in the Global Series. I’m sure those flights were fun. The Blue Jackets lost 4-0 to Boston and 7-1 to New Jersey, while Colorado lost 1-0 to the Devils and 5-4 to the Islanders.
The Avalanche are dead last in 5×5 goals per game. They’ve scored 11 in nine games. They were fifth in the NHL with 198 last year.
— Six players had hat tricks this week: John Tavares registered the 11th of his career, Evander Kane scored his fifth, Thompson picked up his second while Kuzmenko, Karlsson and Christian Dvorak scored the first of their careers.
— Leon Draisaitl produced the fifth five-point game of his career, while Vancouver’s Elias Pettersson scored five points for the third time.
Advertisement
Ad
Advertisement
Ad
— Another week means more injuries.
Jamie Drysdale tore his shoulder labrum and could be done for the season. Big blow for Anaheim.
The Bruins will be without D-man Derek Forbort for 4-6 weeks. He had surgery on his right middle finger.
The Devils will be without Ondrej Palat for an indefinite period of time with a groin injury.
Chicago will be without Seth Jones for three to four weeks with a thumb injury.
Sounds like Ryan Hartman will be out a few weeks for Minnesota with a hand issue.
Tough week for the Washington Capitals. TJ Oshie is out indefinitely with a lower-body injury. Beck Malenstyn is out 6-8 weeks with a broken finger. John Carlsson has missed three games and won’t play this weekend. His status is unknown long-term. The Capitals have been decimated by injuries so far this season. It could cost them a playoff spot.
Advertisement
Ad
Advertisement
Ad
— Four weeks into the season the team I’m most perplexed by is St. Louis.
The St. Louis Blues are 3-6 and have really struggled the past few weeks going 0-6. They are getting crushed 5×5. They’ve been outscored 24-12. Jordan Binnington won his first three starts, but since then his numbers are ugly. He has a .828Sv% (17 goals on 99 shots) and 4.94 GAA. It isn’t always on the goalie, but Thomas Greiss posted .915Sv% and 3.28 GAA in his 146 minutes compared to 206 for Binnington. Binnington can play better, but so can many Blues skaters. They only have 12 goals 5×5 all season. Ryan O’Reilly has one goal and no assists in nine games.
Many of their leaders in 5×5 time on ice are getting crushed in goals for-goals against. Jordan Kyrou has been outscored 14-3, O’Reilly (10-2), Colton Parayko (10-3), Nick Leddy (11-4), Torey Krug (11-6), and Justin Fault (13-8). The Blues can’t score and can’t defend right so far 5×5.
Advertisement
Ad
Advertisement
Ad
— Connor McDavid has 12 goals and 24 points in 11 games. It is the best goal-scoring start to his career. No NHL player has scored 50 goals in his team’s first 50 games since Brett Hull in 1991, however, Auston Matthews did score 51 goals in a 50-game stretch last season.
From November 24th to April 9th Matthews scored 51 goals in 50 games, including two in his 50th game.
He scored 13 goals in the first 10 games.
Then he scored five in games 11-20.
He tallied nine in games 21-30.
Then he scored 12 in games 31-40.
And finished with 12 in games 41-50.
McDavid scored 11 in his first 10 games. If he is hovering around 30 goals after 30 games, then it will become very interesting to see if he can push for a ridiculously difficult milestone.
Advertisement
Ad
Advertisement
Ad