Advertisement
Ad
Thoughts from The Nation: Should the Edmonton Oilers re-sign Mikko Koskinen? 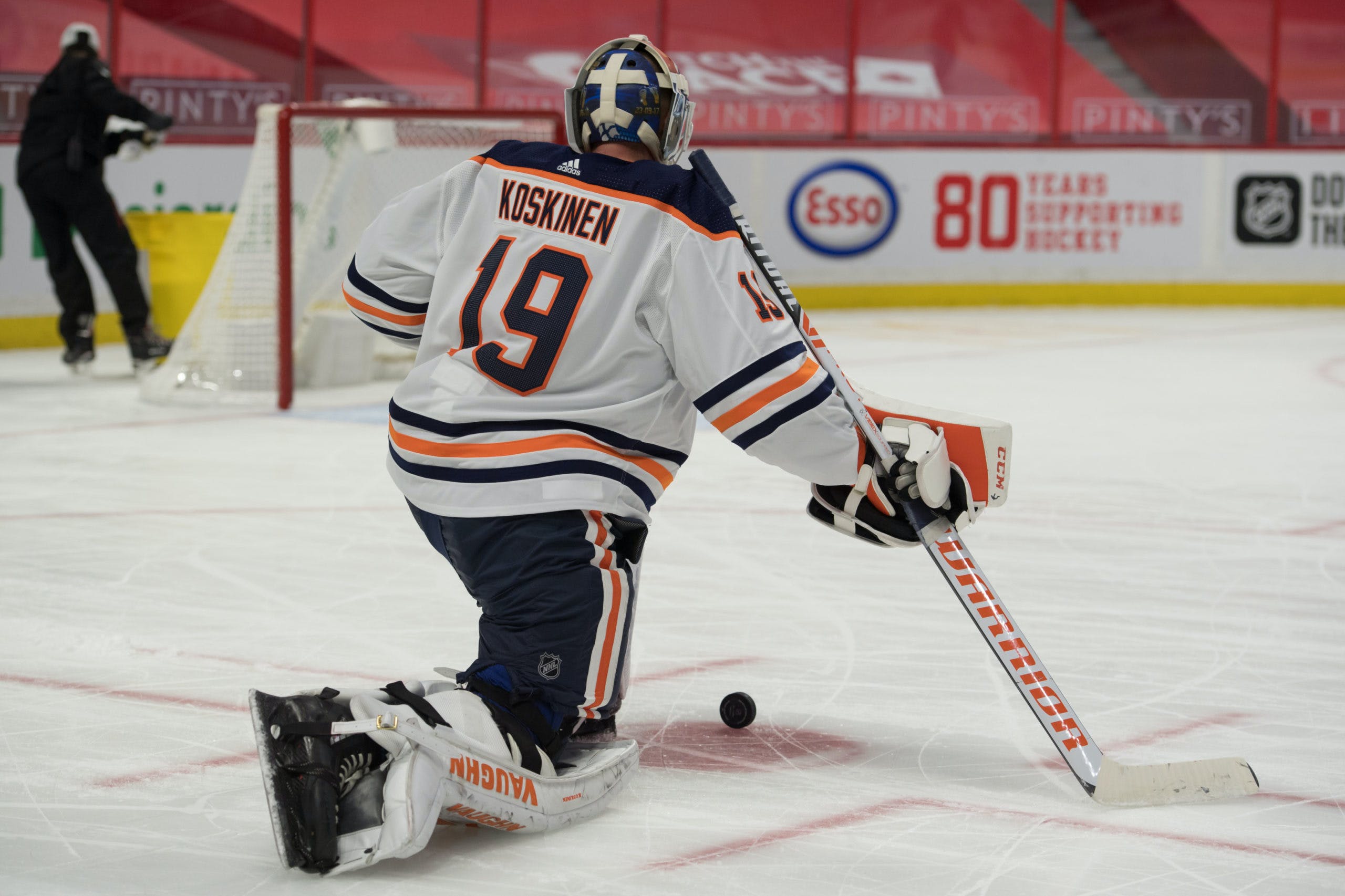 Photo credit: Marc DesRosiers-USA TODAY Sports
By Liam Horrobin
10 months ago
Comments
Mikko Koskinen.
We’ve loved him and we’ve hated him, but at the end of the day, he’s the Edmonton Oilers’ best chance of winning right now.
Is that a good thing? Absolutely not. However, that’s a subject for another time.
Our focus today is to hear the voices of Oilers Nation and to see if the market wants Koskinen to remain an Oiler beyond this season.
Before we dive into your thoughts, let’s look at the facts.
Koskinen is playing the best stretch with the Oilers. Since January 22nd versus Calgary, the big Finn has a 0.909 save percentage. That number comes from 15 games (14 starts). You could easily make the argument that he’s been Edmonton’s best player since then.
Up until that January matchup against the Flames, Koskinen had a 0.892 save percentage and was blown out by the Florida Panthers two days before allowing six goals on 28 shots. You may remember Sergei Bobrovsky robbing the Oilers numerous times in the first period. That loss also marked Koskinen’s 7th loss in a row at that point in the season.
Advertisement
Ad
Advertisement
Ad
The most frustrating part about Koskinen isn’t even his on-ice performance. It’s the money he earns. The $4.5 million cap hit is the last lingering memory of Peter Chiarelli left in the organization. It’s not unfair to say that he hasn’t lived up to his contract, but on the other hand, it’s not his fault. We all know he isn’t worth his paycheck, but nobody would’ve turned that down for the better of the team.
The deal has handcuffed the Oilers since the day he signed it, but now it’s finally coming to an end.
With that being said, let’s see what the Nation thinks about this.

ABSOLUTELY. Edmonton this season has two eras and they MUST be looked at it that way in ALL aspects. Tippett era and JW era. It has effected EVERY player on the team including Mcdavid. It was obvious when he said Ride or Die. He showed the mentality change. Once you change

The opinions were split on this one which surprised me. I thought the large majority of people would have wanted to see a Koskinen and Oilers divorce in the offseason.
Advertisement
Ad
Advertisement
Ad
However, if he’s affordable and on a short-term deal then fans will happily welcome Koskinen back to Rogers Place next season.

I would say yes, on a 2yr deal, around 3 mil AAV, but only IF they can get out from under Smiths contract. Going into next season with both Smith and Koskinen would be a failure. I don't see a top tier starter being available, so Kosk/Skinner is next best option, imo

Plenty of people referred to the fact that Edmonton has Mike Smith under contract next season. That plays a massive role in the future of Koskinen. The point by @Loshhyy below is a good one. Running three goaltenders next season shouldn’t be an option for this team.

No, Skinner will need waivers next season so he has to stay in the NHL. With Smith still here bringing koski back would mean the oilers run 3 goalie. Only way it happens if they can get rid of Mike Smith's contract then maybe they can run a tandem of Skinner and Koski.

Finally, some people just want to move on from Koskinen. They believe it’s time for the Oilers to go out and bring in a goaltender that can help them win the cup. There are a few good names on the market this summer both via trade and in free agency.

Still to inconsistent, between skinner and MIKO I still choose skinner, Offload Barrie and other not needed contacts and BUY A GOALIE

No. Oilers need elite, consistent goaltending during Connor and Leon’s prime. Do what you have to do to make that happen (off-season at this point). Bring skinner up to backup.

If Ken Holland and the Oilers truly believe that Stuart Skinner and Ilya Konovalov are the future in goal, then they shouldn’t resign Koskinen.
Advertisement
Ad
Advertisement
Ad
At the 2021 NHL draft, it was made clear that was the case after they passed on Jesper Wallstedt which I still think will haunt them down the line. However, Skinner has backed up that trust with his performances this year. Fans love him and want him to play every night. He has a 0.913 save percentage which is the best by an Oilers goaltender this year. Konovalov has done a good job in Bakersfield after a rocky start.
Edmonton’s 3rd round pick from 2019 has a 0.895 save percentage and a 2.75 goals-against average in 15 games. While those numbers don’t scream off the page at you consider that Markus Niemelianen, William Laggeson, and Philip Broberg have all spent significant time in Edmonton leaving a void on the Condors blueline.
Advertisement
Ad
Advertisement
Ad
With Koskinen gone, Skinner gets more minutes and Konovalov plays more in Bakersfield.
However, if he leaves who’s coming in?
Marc-Andre Fleury doesn’t seem to have an interest in Edmonton. Braden Holtby could’ve signed last summer but opted to head to Dallas. And then you have Anton Forsberg as a possibility, but does he have a proven enough record in the NHL to move on from what you’ve got?
Darcy Kuemper should be the top option for the Oilers and I think he will be. Holland came close last year to acquiring him from Arizona. If it wasn’t for Philip Grubauer signing with the Kraken then he’d be an Oiler right now.
A couple of goaltenders available for trade could be Jordan Binnington and Mackenzie Blackwood. Binnington is quickly becoming out of favour in St Louis with the emergence of Ville Husso. With Husso being a free agent this summer, St Louis is going to need to pay him if they want to keep him, which could push Binnington out of the door. As for Blackwood, he was one of the best young goaltenders in the league a few years ago. However, injuries have plagued him in New Jersey and caused his numbers to drop.
Advertisement
Ad
Advertisement
Ad
With Binnington’s contract and Blackwood’s injury concerns, it might be best for Holland to stay away.
Exploring needs to be priority number one. If it doesn’t work then bring Koskinen back on a one-year-deal worth no more than $1.5 to $2 million. It’s hard to imagine he has a large market out there waiting for him to sign on the dotted line so the Oilers could resign him on a reasonable contract.
Mike Smith is still under contract next season but something tells me he might be spending some time on the LTIR. If that’s the case, Koskinen and Skinner isn’t such a bad one-two punch but shouldn’t be the first option.
Ultimately, the majority of this only matters if the Oilers find a way to shed Smith’s contract. That needs to be a high priority this off-season. Once that’s out of the way, it’s time for Edmonton to motor on and find a goaltender to help guide this team back to the promised land.
Advertisement
Ad
Advertisement
Ad