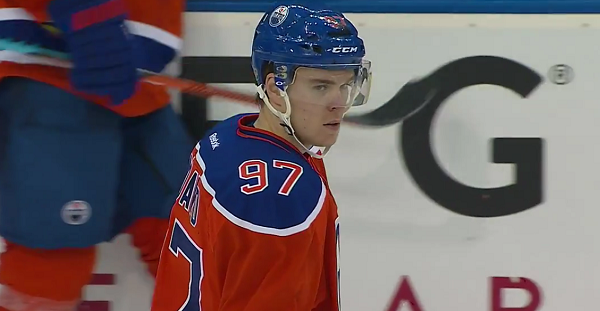 Often, if Connor McDavid isn’t scoring the Edmonton Oilers
aren’t scoring. Over the last 10 games, McDavid has picked up a point on 14 of
the team’s goals; the rest of the lineup has only managed a grand total of 13
without his help.
In this week’s edition of What Would You Do Wednesday, we
ask what the club’s general manager and head coach should do to get some
scoring from all the non-McDavid players on the roster.

If we eliminate McDavid (24 even-strength points), as well
as the wingers who have spent at least 100 minutes on his line at 5-on-5
(Jordan Eberle, Milan Lucic, Patrick Maroon) from the equation, this is what
Edmonton’s five-on-five scoring chart looks like:
As for the rest: Anton Lander is now in the minors (he had
two points in his first game with Bakersfield) and has a discouraging offensive
history in the majors, Drake Caggiula is a rookie pro whose line has been badly
out-chanced and Matt Hendricks is coming off a 12-point season.
Advertisement
Ad
Advertisement
Ad

How can the Oilers get more offence from their second, third
and fourth lines?
Perhaps there is a coaching solution. There are several
potential line combinations that haven’t been given much of a shot yet.
Maybe it’s time to load up the second line, placing both Draisaitl
and Nugent-Hopkins there, though with four of the next six games on the road
there’s a risk of opening up weaknesses lower on the depth chart. It also isn’t
clear who would centre the third line in this scenario.
McDavid can seemingly score with anyone, so maybe it’s time
to knock Lucic off the top line so that he can help the middle-six. Pouliot was
a great fit with McDavid last year and needs to get going again, Slepyshev is
big and fast and might work, and of course there’s always Pitlick or Kassian.
The trouble here is that the coach won’t want to appear to be rewarding a
slumping player, and such an approach may end up weakening the top trio.
Advertisement
Ad
Advertisement
Ad
One of those approaches, or something else entirely, might
work. On the other hand, perhaps it’s time for general manager Peter Chiarelli
to give his coach some help. After letting Kris Versteeg slip away and failing
to grab someone from the P-A Parenteau/Radim Vrbata family this may be
difficult, but there are undoubtedly some options out there.
On the bargain front, Peter Holland in Toronto has 52 points
over 127 games the last two years and seems to be on the outs. Teemu Pulkkinen
is lighting up the minors after failing to stick in a very small window with
Minnesota. Free agents Brad Boyes and Tomas Fleischmann would seem to still be
looking for work.
Maybe none of that’s good enough, and something more drastic
is required. At the other end of the spectrum, perhaps this is just a temporary
problem that will clear itself up with a bit of time.
Advertisement
Ad
Advertisement
Ad
Let us know your view in the comments section, along with
how you’d fix the Oilers’ scoring depth.