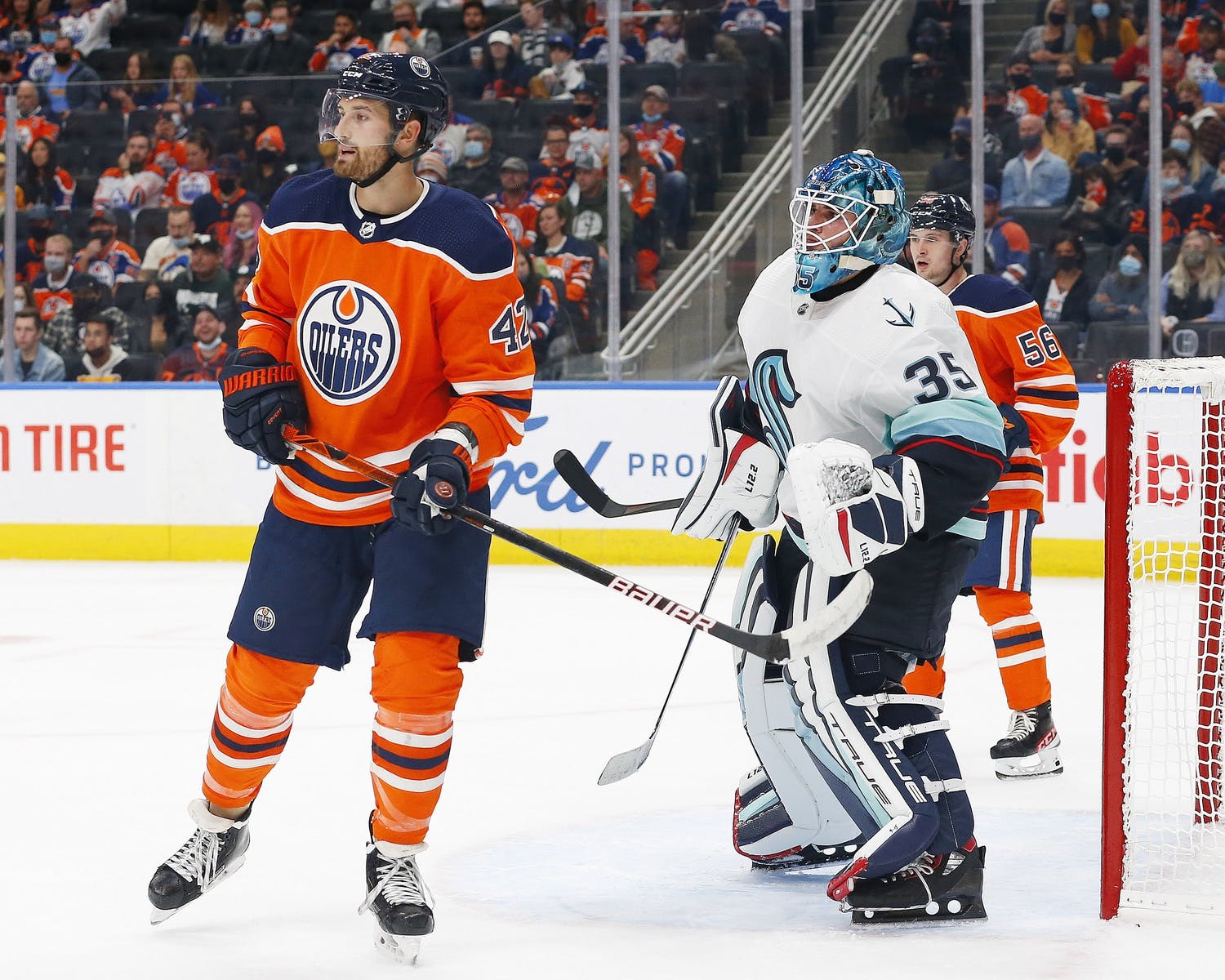 By Robin Brownlee
1 year ago
Leon Draisaitl and Brendan Perlini have taken distinctly different roads to this Edmonton Oilers’ training camp since being selected nine picks apart in the 2014 NHL Entry Draft. Draisaitl, we know about. So, what’s the deal with Perlini, who has taken a less direct route to get here, but is making an argument to stick around in the early going this pre-season?
With two goals in a 6-0 win over the Seattle Kraken Tuesday and three goals in the two pre-season games he’s played, Perlini, who has made NHL stops in Arizona, Chicago and Detroit since draft day, looks ready to unpack his bags here. While there’s still work to do to earn a roster spot in an unusually deep forward group, the 25-year-old winger has caught the eye of coach Dave Tippett, who was his first NHL bench boss in Arizona.
“One of his greatest attributes is that he shoots the puck a ton and that is what he is doing right now,” said Tippett, who met with Perlini in Arizona during the off-season. “He’s playing for his life right now, and that is good to see, a guy who is giving it everything that he’s got.” Tippett’s post-game availability is here.
After 239 NHL games and a stint with Ambri-Piotta in the Swiss League last season, Perlini is here on a one-year deal looking for work as a fourth-liner. He’s got plenty of company. Perlini is big, he can skate and he can score some – he had 14 goals in 57 games for Tippet in Arizona in 2016-17 and 17 for Rick Tocchet the season after. Why Perlini hasn’t managed to stick anywhere, I don’t know.
“I’m grateful for this opportunity to come here and try and help the team and show what I am all about,” Perlini said. “(Tippett) really wants guys playing that 200-foot game and over the last year-and-a-half since I have been out of the NHL, that’s something I have really worked hard on. Stealing pucks and things like that. I think I have added a whole new dimension to my game. I just look to keep putting in good efforts going forward.” His availability is here.
Is this the proverbial Last Chance Motel for Perlini? Is he running out of chances to get and keep a roster spot in the NHL? It looks like it to me. In 2019-20 Perlini got nothing done during a 39-game look-see with Detroit. At some point, even players with first-round pedigree like Perlini run out of chances. I can’t imagine he’ll get a better shot than this. 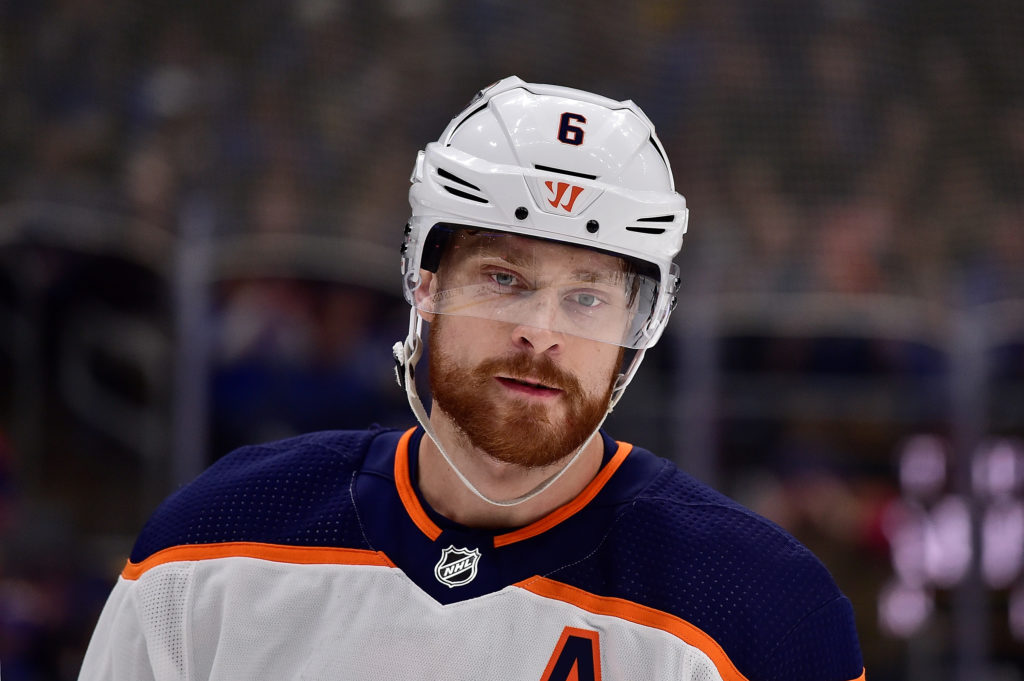 Dec 18, 2019; St. Louis, MO, USA; Edmonton Oilers defenseman Adam Larsson (6) looks on during the second period against the St. Louis Blues at Enterprise Center. Mandatory Credit: Jeff Curry-USA TODAY Sports
For those critical of GM Ken Holland without knowing all the facts when Adam Larsson opted to sign with Seattle rather than stay with the Oilers, Mark Spector of Sportsnet got to the heart of the matter when he talked to Larsson in this piece Tuesday.
After losing his father Robert to a heart attack during a visit to Edmonton, Adam needed a fresh start he felt he could not get if he stayed here. The money quotes from Larsson: “It was tough to come back. That was a big factor, for sure. It was a real tough decision, and I felt like I had to do it for my personal well-being. I feel like there was nowhere else to get a fresh start.
“I loved my time there. The guys, I made some lifelong friends there. Even the negotiations. What Kenny offered, it was really good. This was not about (money). It was about family. I just wanted to make the right decision. It had nothing to do with money.”

The dressing room wall sculpture of Joey Moss — done by sculptor Ryan Kurylo — the Oilers unveiled Tuesday was right on the money, especially the high-five hand that adds dimension and character to the piece. The palm of the hand is a direct print from Joe. Anybody who has spent any time in the Oilers room or around the rink recognizes how the piece captures the essence of Joe. It’s wonderful.
Joe was a prime example of what is possible when opportunities are made available. There’s another example of that playing out in Nashville with the Predators. Craig Waugh, known to everybody at the rink in Music City as “Partner,” has been the attendant in the dressing room for visiting teams since Day 1 of the franchise. His success story is here.