Can somebody please do something when Connor McDavid gets kneed? 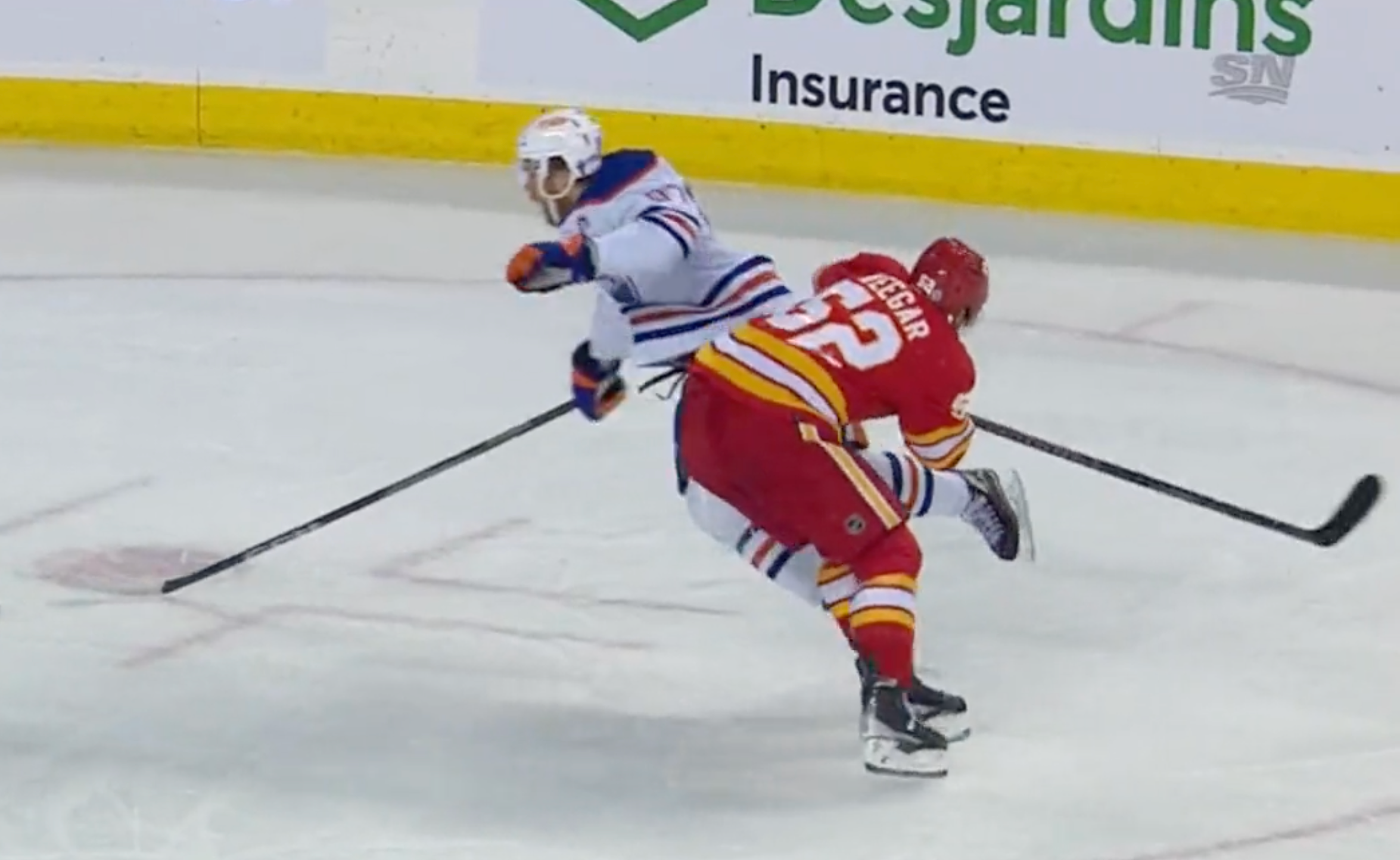 By baggedmilk
1 month ago
During last night’s win over the Calgary Flames, Connor McDavid took a knee-on-knee hit from MacKenzie Weegar — thank the Hockey Gords that he was okay — and it was a moment that was both stressful and infuriating at the same time. Stressful because you never want to see Connor get hit like that, and infuriating because no one in a white jersey did anything about it.
Before we get started here, I’m generally not one of those people that thinks it makes sense to have a nuclear deterrent that can’t play on the roster. Here in 2022, we’re in an NHL era with so much skill and having players that can’t compete in a real way is not the best use of cap space anymore. That’s not to say I don’t like a good scrap, I grew up loving the Oilers when Georges Laraque was the toughest player in the league by a country mile, but I think the game is too skilled these days to be using up a spot in the lineup for someone that only has one pitch if that makes sense. That said, last night was a night when I was pretty damned close to changing my mind. After seeing Mackenzie Weegar hit McDavid with a knee that sent him spiraling to the ice with a grimace, I was ready to fill the fourth line with nothing but goons. Why the change of heart, you ask? BECAUSE NOBODY DID ANYTHING WHEN THEIR CAPTAIN WENT DOWN.
So far during the 2022-23 season, there have been instances when we’ve talked about whether or not the Oilers are tough enough as a group. There have been games against teams like Nashville and St. Louis when it would have been nice to have more sandpaper in the roster, and most of the time, that’s what we’re talking about when playing against a heavier opponent. Last night, however, was something else entirely. What I really don’t understand is why nobody on the ice did anything at all after seeing their captain and meal ticket get taken out with a questionable hit. We can debate whether Weegar clipped McDavid intentionally with his knee or not — I can legitimately see both sides of the argument on this one — but what I refuse to accept is that there was no pushback whatsoever from anyone in a white uniform. I know what the score was and I know that it was a pivotal point in the hockey game, but this was a situation when everyone in an Oilers uniform should have been flying into the pile. I don’t care if you fight — that’s not what I’m saying — but the complete lack of pushback was a real problem for me. There wasn’t a glove to face, a slash to the ankle, or even a strongly worded letter to Weegar’s mother. There was no response whatsoever, and I think that’s ridiculous given how important Connor McDavid is to this team.
Take this example from late November when Robert Bortuzzo ran into Andrei Vasilevskiy in the crease. Without hesitation, the Tampa Bay Lightning players all jumped on him as if he had just stolen the Declaration of Independence. They didn’t wait around, they didn’t care about the score, they just cared about defending their star goaltender, and I don’t understand why the Oilers don’t have that same response when something happens to their captain. I mean, I’ve watched this replay 100x at this point, and even though Bortuzzo was pushed into the former Vezina winner, the Lightning didn’t care what led to the hit — they jumped in to defend their teammate anyway. How is it that we have the best player on the planet on our roster and he can’t get so much as a fly-by from one of his teammates after a questionable hit like the one he took from Weegar? How is it possible that no one around was mad enough to make their first punch a dropkick? Call me old school or out of touch or a knuckle dragger or whatever you want, I just don’t get the lack of response when this happens to your captain.
The good news is that the Oilers will eventually get a player back in Evander Kane who will undoubtedly do something in these types of scenarios. Had he been on the ice when Weegar and McDavid collided, I have zero doubt in my mind that he would have beelined straight to the Calgary defender and filled his face with fists whether he wanted to go or not. Unfortunately, we’re still a couple of months away from having Kane back in the lineup, and I hate the idea of it being open season on our stars until he comes back. Unless the Oilers find it within themselves to play for and defend each other, they’re going to be targeted on the physical side of the game because the opposition knows they can run around without anything happening. Again, I’m not expecting everyone to start dropping the mitts just because of this hit by Weegar — we know that’s not happening on a team that’s tied for 28th in team fights this season — but it was incredibly frustrating in that moment to see that seemingly no one cared enough to do anything about it.
Editorials
Featured
Oilers Talk
Recent articles from baggedmilk