Coming to you live from the NHL Skills Competition! 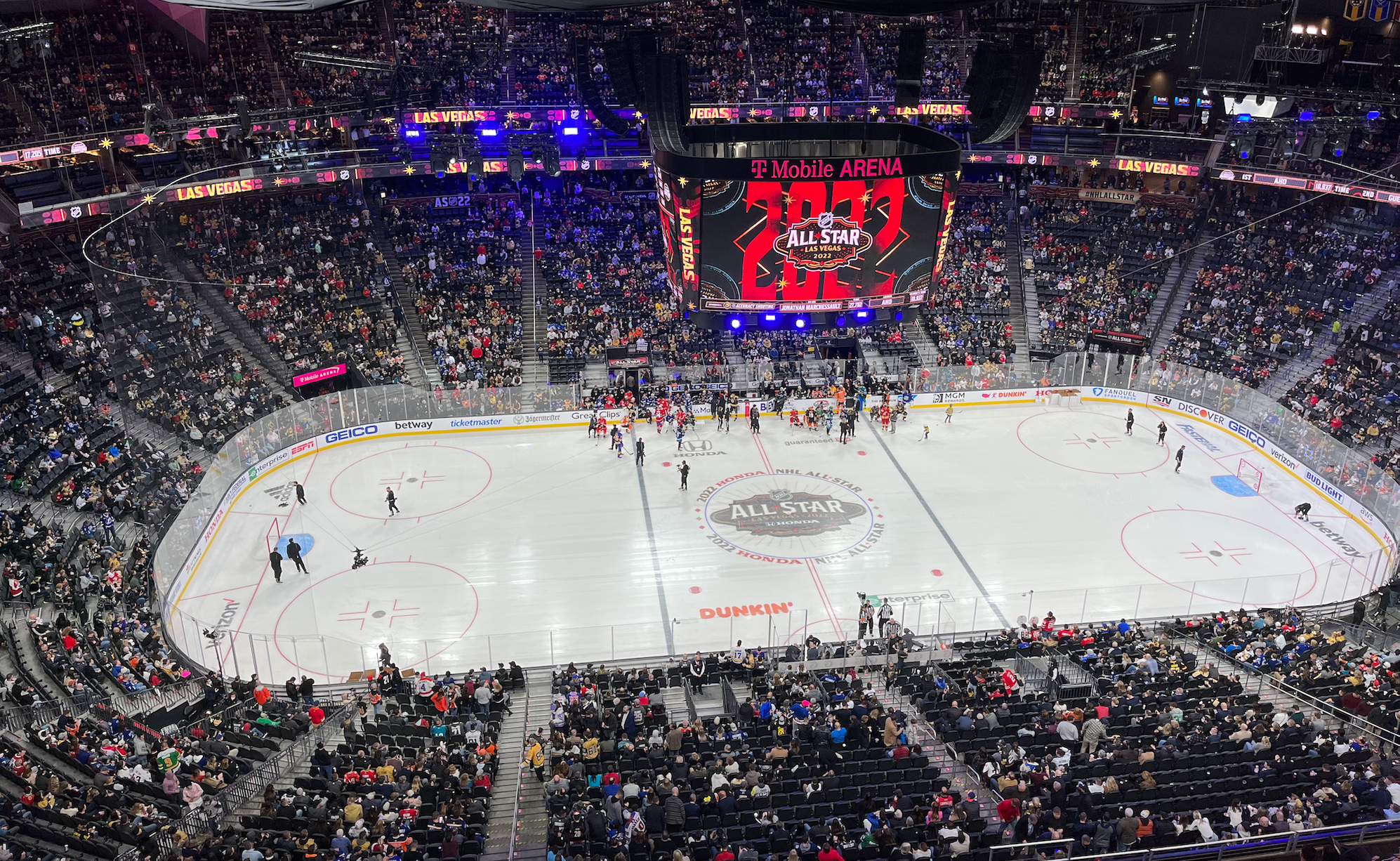 By Tyler Yaremchuk
9 months ago
I’m sitting here live at T-Mobile Arena in Las Vegas, all settled in a ready-to-watch the NHL’s Skills Competition and honestly, the atmosphere is fantastic. You don’t have to scan the crowd very long to find the jersey of whichever NHL team you want to see. I even saw an Arizona Coyotes jersey pop up.
I absolutely loved watching the Skills Competition as a kid. It was one of my favourite hockey moments of the year. I was just an absolute nerd for it so to get the opportunity to cover it really is a dream come true.
Before even getting into the arena though, it’s clear that the Golden Knights and the NHL did this thing the right way. On a weekend when the NFL’s Pro Bowl is also in town, the NHL stood out as the bigger story. There were signs everywhere, advertisements in all the casinos, and the outside of T-Mobile Arena looked fantastic.
It was also great to just wander around the Vegas strip and see all the hockey fans in town for the event. It really felt like the NHL had taken over Vegas which so damn cool to see. This city just straight up loves its hockey. 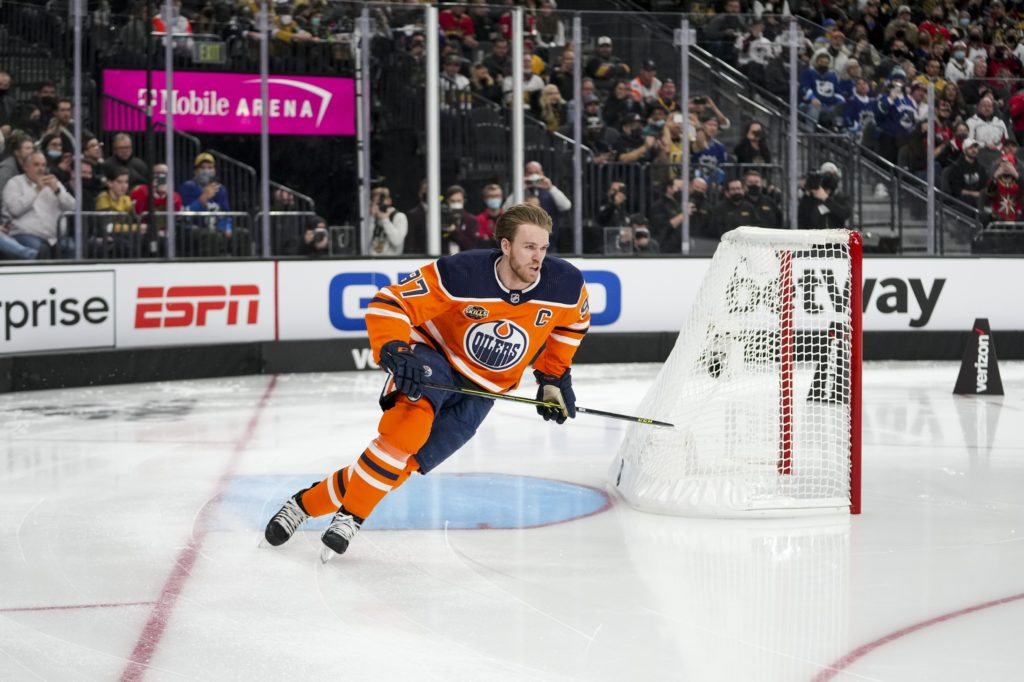 Feb 4, 2022; Las Vegas, Nevada, USA; Pacific Division forward Connor McDavid (97) of the Edmonton Oilers competes in the fastest skater event during the 2022 NHL All-Star Game Skills Competition at T-Mobile Arena. Mandatory Credit: Stephen R. Sylvanie-USA TODAY Sports
Things got going with the fastest skater competition which I found a little odd. To me, that’s one of the marquee events of the night so it was weird that they went with it right off the bat.
Sadly, our boy Connor McDavid could not win the event for a fourth time. He was all smiles as he came around the bend following his lap and heard his time. Jordan Kyrou of the St. Louis Blues ended up beating McDavid by a fraction of a second. It was damn close. Too bad for McDavid.
Next up was the ‘Save Streak’ competition. Sadly, no Oilers were in this one (Mikko got robbed!!!) but we did have an old friend taking part in this one: Cam Talbot! ‘Dad-bot’ was pretty solid but it’s a tandem event and he and Saros couldn’t beat the nine save streak that was set by Andrei Vasileskiy and Jack Campbell.
This event honestly kind of dragged on. Some of the moves from the shooters were sick but this wasn’t my favourite. They also had a flood right after so things slowed down a bit. Next up though was the highly anticipated Fountain Face-Off out at the Bellagio Fountains.
Straight up, anyone who complained about this event is just a massive fun sponge. The NHL tried to do something different and unique. Even if you think the execution was off or whatever, you can’t fault the league for trying to do something new.
I think they knocked it out of the park with this one. The visuals were great and the event was fun. Jocelyne Lamoureux-Davidson brought the crowd to their feet with her performance. No complaints from me.
The hardest shot competition needed to be longer. It always gets the crowd going when guys crack 100 mph or whatever and to see a total of eight shots was a little lame. MORE THAN FOUR SHOOTERS NEXT TIME NHL!
Side note: Golden Knights fans HATE Tom Wilson. They booed this guy RELENTLESSLY every time. They laughed and cheered when his first shot didn’t hit 100 mph. It was hilarious.
Anyways, Victor Hedman won with a shot that was 103.2 mph and the light-up puck hit the mesh and bounced all the way down the ice. Insane.
The breakaway challenge was up next and I’m excited for this one. Im writing this whole blog live as the event goes, so I hope I’m not disappointed. It’s Vegas so I’m hoping that a few players pull out something very cool and the list of celebrity judges was sweet.
UPDATE: WHAT DID TREVOR ZEGRAS JUST DO?!
Originally I felt bad for Jack Hughes having to follow that up but his magic act was pretty good too. He shouldn’t have beaten Zegras, those judges were clueless I tell ya, but he got the crowds going.
And then I started thinking, well how can ANYONE beat those two and well, Alex Debcrincat was pretty good too bringing out Derek Carr and having a whole Hangover-themed outfit. The attempt was great as well. All three of those young guys knocked it out of the park. Cheesy? Yup, but still fantastic. They should have put this one last.
The fact that Zegras didn’t win is a joke but I mean, they wanted the hometown guy to get his cheer so whatever. He was clearly the worst of the group though.
The 21 in ‘22 competition was a cool idea as well. I thought the players brought more personality than the guys on the fountain did and that elevated it. It could have sucked but I thought Pavelski and Stamkos were really funny. They certainly picked the right guys.
The final even: accuracy shooting. Leon Draisaitl got the event started with a pretty disappointing run. A sad moment for sure. It was fun to see him laughing with Talbot on the bench after though.
All in all, the event was fun. Some players showed some personality, we got to see a few new events, and there really wasn’t a lot to complain about. The players all ripped around after and threw stuff into the crowd and some guys even let their kids skate around and shoot some pucks. A good time was had.
I’ve always loved to ask the question “would you rather have your city host an NHL Draft or an NHL All-Star weekend?” After experiencing just the Skills Competition tonight, I think you’d be insane to not want this thing in Edmonton one day. It was really entertaining.
Nation Takes
Oilers Talk
Recent articles from Tyler Yaremchuk