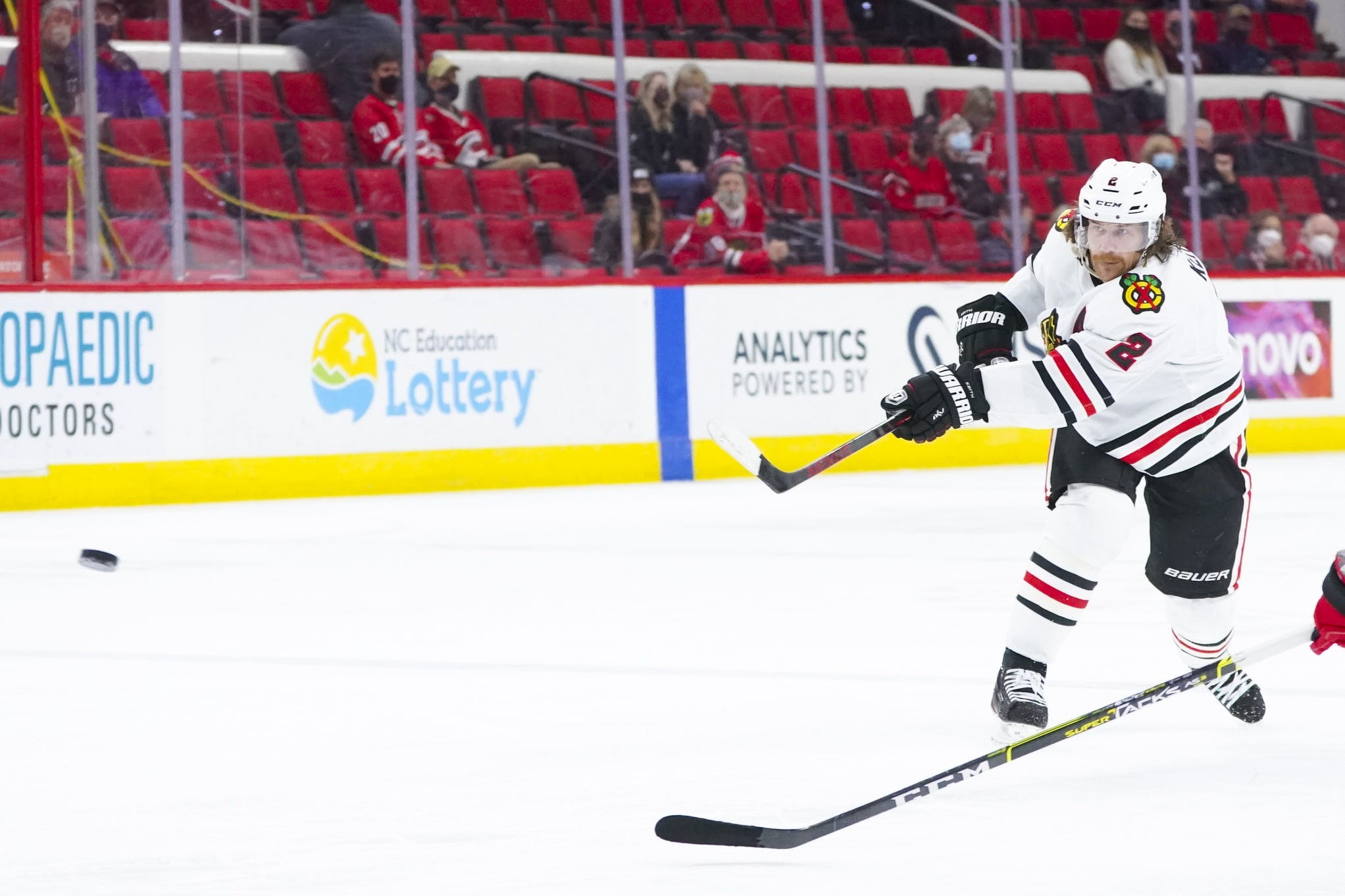 By Robin Brownlee
1 year ago
Given how little we saw Duncan Keith during what was an unquestionably trying season for the Chicago Blackhawks with teams playing in re-aligned divisions during COVID, I spent some time Tuesday reading up on him. While I was still a beat writer covering the Edmonton Oilers at the dailies during Keith’s first two years in the NHL, he was a kid then. It’s been a while.
With all the debate since the trade that brought Keith to the Oilers – most of it about the $5.5 million AAV he brings to Edmonton after being acquired with Tim Soderlund for Caleb Jones and a conditional third-round draft choice – what’s the deal with Keith? I know he’s a two-time Norris Trophy winner. I know he’s a three-time Stanley Cup champ. I know what the numbers say about last season. But what’s he about? What makes him tick?
Most important, with Keith turning 38 Friday and with his best years behind him, what kind of player are the Oilers getting? I listened to the Zoom calls and interviews Keith has given since the trade and to what those who know him have said. Pretty standard stuff. There must be more. There is. One of the things that caught my attention was a piece by veteran scribe Bob Verdi, who writes at the Chicago Tribune and is the Blackhawks’ historian. The item is here.

Three excerpts stand out for me. First: “I had to work hard,” Keith said, talking about making it to the NHL. “I heard things along the way when I was a kid. I was too small. ‘How is he going to survive?’ And once you get to the NHL, then it’s about staying in the NHL. Once you get in the door, it didn’t mean I could take a breath. Nothing beats hard work.”
From Verdi: “Keith here was, and with the Oilers will remain, the quintessential hockey player. Talented, devoted, smart, creative, loyal, reliable, indefatigable, selfless and — to steal Bobby Hull’s description of Stan Mikita — tougher than a night in jail. There was nothing Keith didn’t do for the Blackhawks, except take a night off. He left everything out there on the frozen pond, including his teeth.”
And: “Keith is an ardent believer that “a hungry wolf hunts best.” Well, he’s still chasing another Stanley Cup and this cyborg has many miles left in his skates. But he will do so with the Oilers. He resides in British Columbia and waived his no-trade clause to spend more precious moments with son Colton, 8, who might just be a chip off the old block.”
Still a hungry wolf after all these years? It seems so. Keith could walk away from the game if he wanted because he’s made all the money he’ll ever need. Yet, over the last couple days when asked, he’s said he feels he can play into his 40’s. That’s easy to say but more difficult to do. The thing is, Keith is a fitness freak. You can see his workout routines at his website. People will tell you Keith’s competitive fire still burns bright. Beyond that, his fitness level is off the charts. He talks the talk and walks the walk.
We know Keith asked for a trade – not a request that was made lightly after his years in Chicago – to be closer to his son at home in Penticton after a long absence because of COVID travel restrictions. I’m not objective on this, but everything else being equal, I’ll take a family-first guy every day of the week. That won’t help his advanced stats or make him a better player, but it makes him a better man. To me, character matters. Might it matter in the room with this group?
Speaking of character, you can get more insight about Keith and the charitable work he’s involved in through his longstanding foundation, Keith Relief. You can read about the initiatives he’s involved in here, here and here. Again, all these projects Keith has immersed himself in won’t show up in any measurable way on the ice, but character, at the rink and away from it, is one of those intangibles that matter because it forms part of the player and the man. It’s part of what makes Keith the player he is. 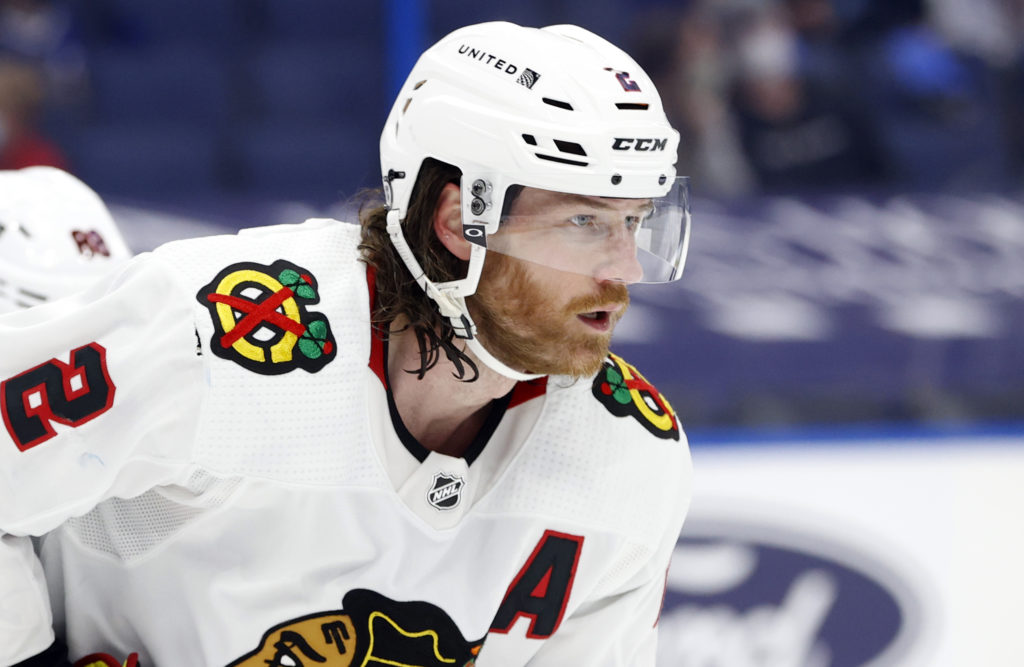 Mar 20, 2021; Tampa, Florida, USA; Chicago Blackhawks defenseman Duncan Keith (2) against the Tampa Bay Lightning during the first period at Amalie Arena. Mandatory Credit: Kim Klement-USA TODAY Sports
At the bottom line, none of the above matters if the wheels have fallen off and Keith can’t play. I think he can, especially in a second-pairing role that’s better suited to him. I think GM Ken Holland knows exactly what he’s getting and how that will fit on the ice and in the room with a group of players still learning what it takes to win. I’m guessing talk about the same made for conversation last night when Holland and Keith met for dinner.
The more I learn about Keith, the more I like him. A little of that hungry wolf came out during Keith’s interviews Monday, “I feel I have a lot left,” he said. “Once we hit the ice, we will see who’s a step behind. I’m not one for talking but we will see what happens when we get on the ice.”
Now, he just has to go out and play.