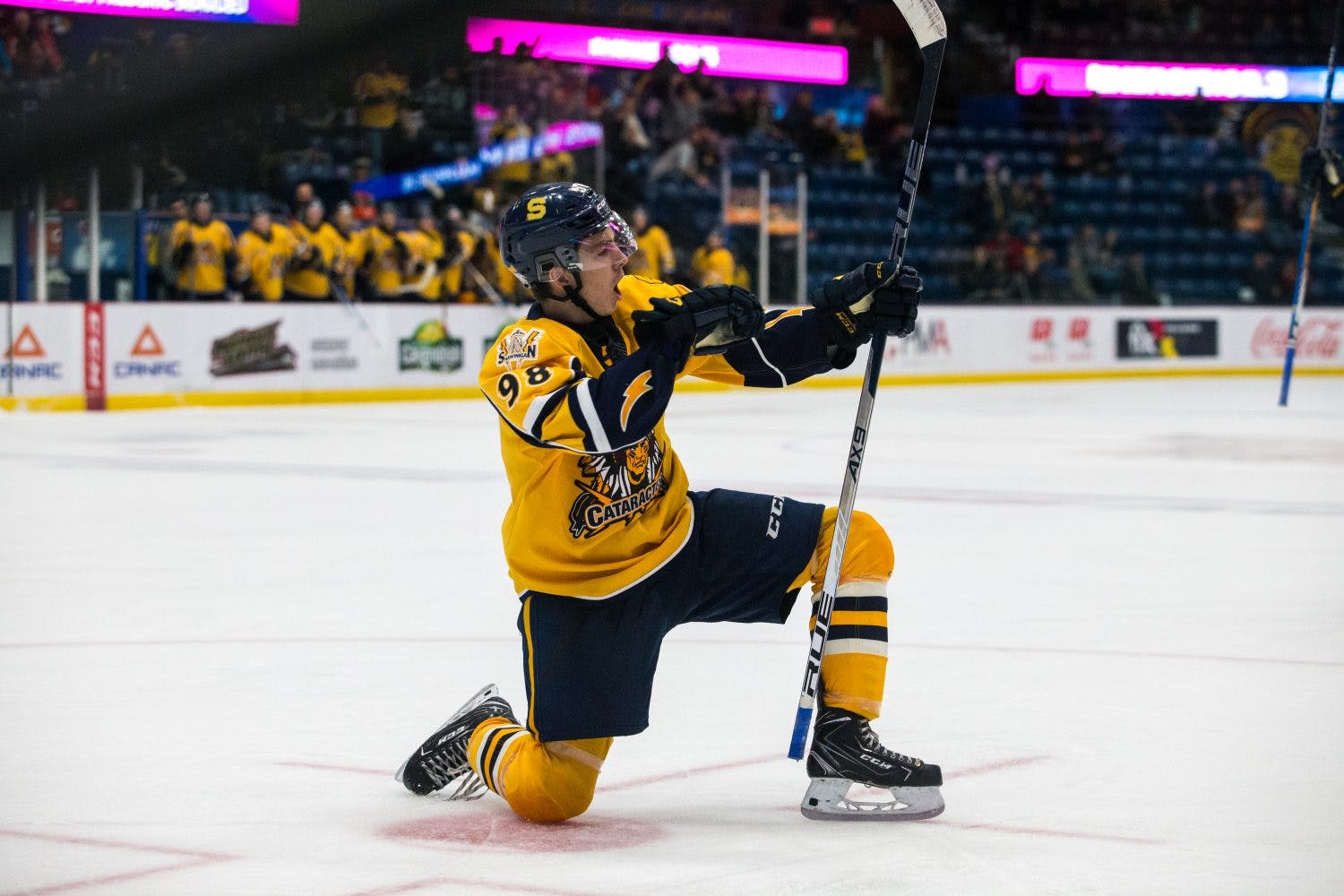 By Liam Horrobin
1 year ago
Every week it’s the same names that continue to shine in the Oilers prospect world: Xavier Bourgault, Carter Savoie, and Tyler Tullio. It’s great to see that those players are able to perform at such a high-level week in week out.
For this week’s edition of the prospect report, a few of the lesser-known names will be given some of the spotlight. However, we do need to cover the week Bourgault had in the QMJHL.
Bourgault continues to reign terror on goaltenders across the Quebec Major Junior Hockey League. The Oilers first-round scored eights points in two games extending his point streak to three. He scored twice against the Blainville-Boisbriand Armada, including the game-winner midway through the third period. The next night, he one-upped himself with a five-point performance against the Armada on home ice. Bourgault is now averaging two points per game and leads the league in points with 24.
Shane Lachance finally got his name on the box score for the Youngstown Phantoms. He opened the scoring for Youngstown in their 4-2 win over the Cedar Rapids RoughRiders. The next night, Lachance grabbed his first assist of the year in a 5-1 win over the Chicago Steel. He’s following in his Father’s footsteps (Scott LaChance) and heading to Boston University next season, which will be an excellent spot for him to develop his game. Lachance is a big 6’4’ forward who the Oilers took in the sixth round in the 2021 draft. It’ll be a while before we see him play within the Oilers organization.
Over in Europe, Maxim Denezhkin had himself a productive week. The Oilers selected Denezhkin 193rd overall in the 2019 draft and is having a successful season in the VHL (Russia). Over this past week, he scored two goals and five points in four games for Lada Togliatti. That now takes his season tally to five goals and 17 points in 19 games. Denezhkin is only five points away from matching his career-high (22) in the VHL, which came last season with Buran Voronezh. He is an unsigned prospect for now, but if he continues his production this season, there’s a chance we see him in Bakersfield in 2022.
Another European prospect for the Oilers is Luca Munzenberger. Munzenberger is playing the NCAA this season with the University of Vermont who is coached by Todd Woodcroft – the brother of Bakersfield Head Coach Jay. The big German defenceman found his scoring touch over the weekend with two assists against Boston College.
Down in Bakersfield, the Condors went 1-1-0 against the Henderson Silver Knights. Dmitri Samorukov scored the game-winner last Friday in his second game back from injury, and Philip Broberg picked up a couple of assists. Broberg now has five assists on the year, which leads the Condors. Cooper Marody, who scored two goals and one assist, was the only other Condor to have a productive week.
Dylan Holloway is still sidelined with his injury and isn’t expected to return to action until mid-December. Carter Savoie didn’t play this week either for the University of Denver as the Pioneers were on a bye week. Finally, Jake Chiasson remains out of the Brandon Wheat Kings lineup due to injury.
News
Team News
Recent articles from Liam Horrobin