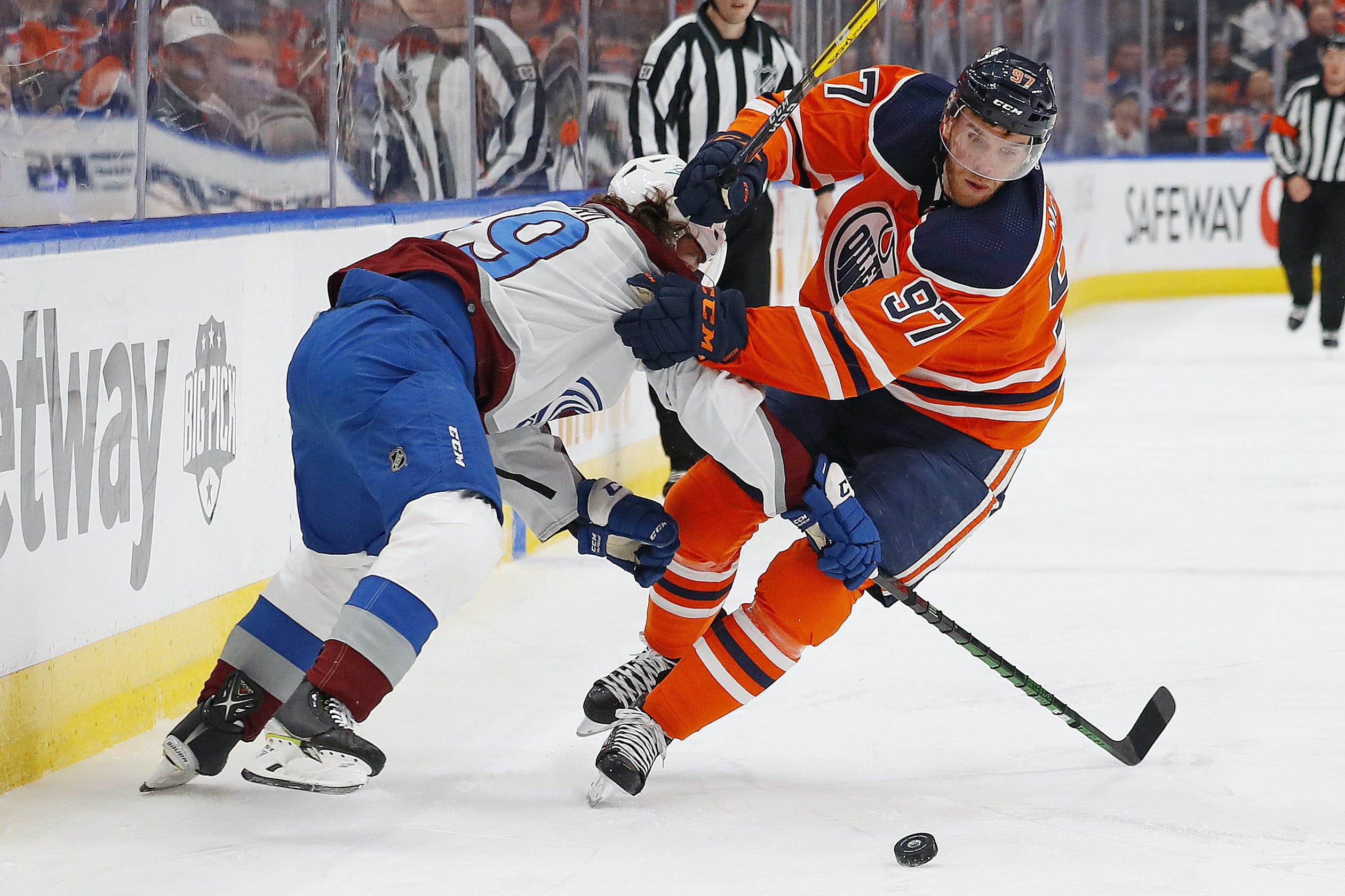 By Jason Gregor
7 months ago
There is no shortage of high-end talent in the Western Conference Final between the Edmonton Oilers and Colorado Avalanche.
@Connor McDavid, @Leon Draisaitl, @Nathan MacKinnon, @Cale Makar, @Mikko Rantanen, @Evander Kane, @Nazem Kadri, @Gabriel Landeskog, @Ryan Nugent-Hopkins, and @Zach Hyman will all play a role in determining which team represents the West in the Stanley Cup Final.
But who will have the biggest impact?
Each of the aforementioned 10 players has a solid resume, and in many cases a spectacular one.
Over the past fours seasons these players have been been scattered across the goals, assists and points leaderboards.
McDavid (1st), Draisaitl (2), MacKinnon (5) and Rantanen (18) were all top 20 in points.
Landeskog, RNH, Kane and Kadri are all in the top-80.
Draisaitl (179), McDavid (152), MacKinnon (128), Rantanen (116), Landeskog (1057) and Kane (100) were among the 33 players who scored 100+ goals the past four seasons. Kane and Rantanen each missed four games and still cracked 100. Hyman had 84 goals.
Makar’s been in the NHL three seasons, and in that span he is the only D-man to average one-point-per game. He has 180 points in 178 games. He’s one of the most dynamic players in the NHL.
The top-end talent in this series is amazing, and while depth is often a topic of conversation come playoff time, and I understand why, this series could be determined by which star shines the brightest.
Draisailt had 17 points in the Oilers five-game series victory over Calgary. He set an NHL record for most assists (4) in a period, tied the record for most points (4) in a period and set and then broke his own record for most consecutive playoff games with three+ points. The old record was three, and he broke that in game four and then added four points in game five. Ridiculous.
McDavid is tied with Draisaitl for the playoff scoring lead with 26 points in 12 games, but McDavid has been on the ice for 38 goals for thus far and only 11 against. The next closest is Draisaitl at 29-15 and then Adam Fox at 27-17 and Makar at 25-13.
Colorado’s top forwards aren’t on the ice for as many goals, but they haven’t been on for as many goals against: Landeskog (21-6), MacKinnon (20-6) and Rantanen (17-8). The main question is: Can Colorado’s top stars match the Oilers’?
Here is a look at their per 60 (all situations) in goals, assist, points, shots, penalties drawn, giveaways, takeaways and hits.
I added P/60 at 5×5 to illustrate how productive McDavid and Draisaitl have been. Which matchup will Jared Bednar want tonight?
We know Makar and Devon Toews will face McDavid as often as they can, but which forward line will face them?
In the only regular-season game in Colorado, McDavid played 16:49 at 5×5. But Draisaitl wasn’t on his line. McDavid was with Kane and Yamamoto. And MacKinnon’s line played seven minutes against McDavid, while Nico Sturm played 5:40 and Kadri played 3:40.
If Draisaitl starts with McDavid tonight, I’d expect MacKinnon to get the matchup, and then Kadri would play against the Nugent-Hopkins line and Ryan McLeod line.
The wildcard is if Woodcroft considers moving Leon Draisaitl to centre the second line.

Hyman – McDavid – Draisaitl
Kane – RNH – Yamamoto
Foegele – McLeod – Puljujarvi
Archibald – Ryan – Kassian
Nurse – Ceci
Keith – Bouchard
Kulak – Barrie
Smith
The Oilers had an optional skate this morning and Jay Woodcroft wasn’t tipping his hat on which line combinations he will go with. The Draisaitl-McDavid-Kane line was incredibly dominant v. Calgary. But moving Draisaitl to centre would be a significant move. I understand the rationale to do it, but right now the top line has been so good that I’d start the series with Draisaitl and McDavid on the top line. I do wonder if Woodcroft opts to play Hyman with them and have Kane in a matchup v. Kadri, which is why I have Kane with RNH and Puljujarvi looked the most comfortable in game five, so I’d keep him with McLeod. He and Foegele will need to use their size and speed to match the JT Compher line. Many interesting potential matchups.
Woodcroft has spoken often about how his main message and focus is on what his team does well. If you believe that, then keep McDavid-Draisaitl together…for now.
I’m not sold that the Nichushkin-Kadri-Lehtonen line is much more dangerous than Calgary’s second line. Edmonton should be confident that Nugent-Hopkins’ line could match them, and right now the Oilers’ top line has outperformed Colorado’s top line. That might change once the series begins, but I’d stick with my dominant line to start. McDavid and Draisaitl are the first teammates in NHL history to each have 26 points after two rounds of the playoffs. That’s how dominant they’ve been.
The Oilers trailed 3-0, 2-0 and 2-0 in three road games in Calgary. They won two of them, but that is not a recipe for success long term. They need a better start tonight.

Landeskog – MacKinnon – Nichushkin
Lehkonen – Kadri – Rantanen
Burakovsky – Compher – Aube-Kubel
Cogliano –  Helm – O’Connon
Toews – Makar
Byram – E. Johnson
J. Johnson – Manson
Kuemper
Bednar used different top-six combinations in the last three games v. Blues.
In game four he ran:
Landeskog – MacKinnon – Rantanen
Nichushkin – Kadri – Lehkonen
In game five it was:
Nichushkin – MacKinnon – Rantanen
Landeskog  – Kadri – Lehkonen
In game six:
Landeskog – MacKinnon – Lehtonen
Nichushkin – Kadri – Rantanen
He isn’t afraid to move guys around, and I suspect we will see both coaches using different top-six combinations this series. I went with the two lines in my lineup card that people in Colorado think they will start game one with.
The Oilers will need to be very leery of Makar jumping in the rush. He’s extremely dangerous when you turn the puck over, so whoever is on the ice against him, has to not only avoid high-danger turnovers, but also be alert and aware of where he is if you have a turnover. 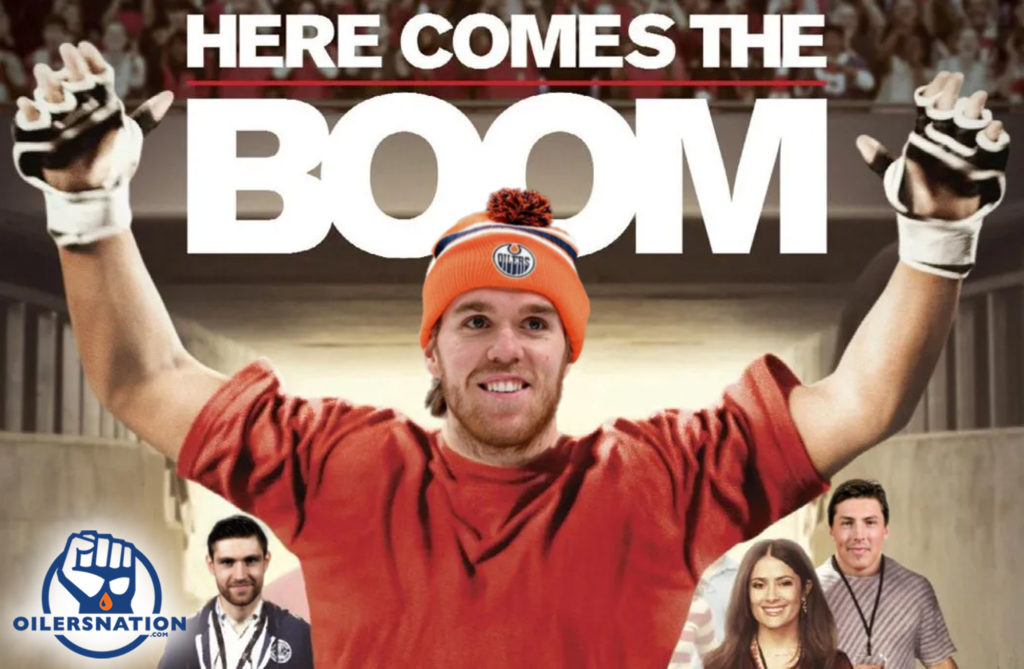