GDB 5.0 Wrap Up: The Blues are painfully boring but ultimately effective, Oilers fall 2-0 in Saturday matinee By baggedmilk
1 month ago
Tough to win when you can’t score a goal. Final Score: 2-0 Blues
Welcome to our game day content brought to you by NHL Lines site Betway!
The great thing about matinees is that they have an amazing way of setting the tone for the rest of the day. If the boys pull out a win, we’ve got most of the day to celebrate however we please, and that’s always a magical feeling. If they lose, the general annoyance roars in as normal with a major difference being that we have the rest of the day to build a bridge and get over it. Obviously, we’re always shooting for the win but we needed the boys on the ice to handle their end of the bargain. So when the Blues opened the scoring just over five minutes into the game on the power play, I wasn’t exactly surprised but certainly not brimming with joy. For the fourth time in five tries, the Oilers gave up the first goal of the game and were forced to chase once again. To make matters worse, the boys mustered only five shots on goal through the opening 20 minutes and it’s extremely obvious to say that they’re going to need a whole lot more than that if they’re planning to come back.
Down by a goal with plenty of time left to play, the first step for the Oilers would be to crank up their urgency levels to try and put the Blues back on their heels. Let’s be honest, St. Louis had a pretty casual start to this game and if the Oilers were going to grab the next goal, they needed to cause some chaos in the offensive zone. Instead of looking for the perfect play, I wanted the boys firing pucks from the parking lot and getting greasy near the crease to actually test Jordan Binnington rather than giving him an easy afternoon. Clearly having shots on goal as a point of focus, the Oilers threw as many pucks on net in the first half of the second period as they had through the entire first, and that small upgrade was already enough to lift my spirits. The problem, of course, was that they couldn’t get anything past the goalie. A more defensive game than we got against Carolina, chances came at a premium, and if ever there was a time to go fishing for garbage goals, this was the time. But even though the Oilers did a decent job of manufacturing opportunities for themselves, the boys just couldn’t solve Binnington and the one-goal hole remained.
Heading into the third period, the Oilers needed to up the pace to another level because even though they were only down by a goal, the Blues’ trap style of play meant that getting that one back wasn’t going to be easy. Just as importantly, Edmonton had to find a way to cash in the next goal while also not giving up too much defensively since going down by a pair would probably be too much to overcome. Of course, the problem with this plan is that the St. Louis Blues are one of the best teams in the league at shutting things down, and that meant the Oilers needed to find a way to cash in a goal while sinking in quicksand. So when the boys finally got a power play chance at the midway point of the period, it seemed like a do-or-die moment where they needed to take advantage of the opportunity. Unfortunately, we didn’t even get a shot on a net, and with the clock winding down, the need for a miracle was becoming apparent but it was just not meant to be. In the end, today’s contest was low-event and highly boring, and it was the team that thrives in those kinds of games that walked away with the win. Flush it and forget it, see you Monday.
The wrap. 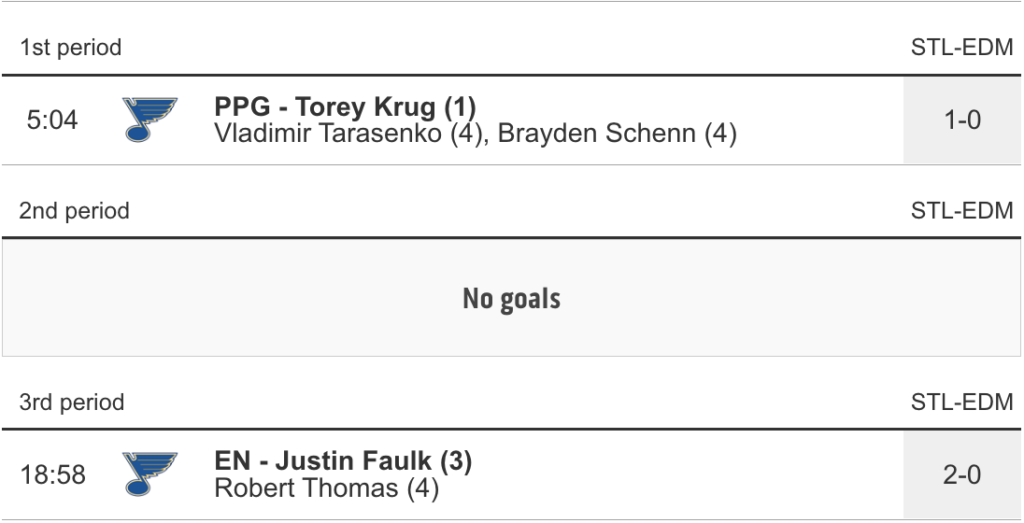 Subscribe to Better Lait Than Never for FREE on Spotify, Apple Podcasts, Google Podcasts, and wherever else you get your podcasts from!
Editorials
Featured
Oilers Talk
Post Game
Recent articles from baggedmilk