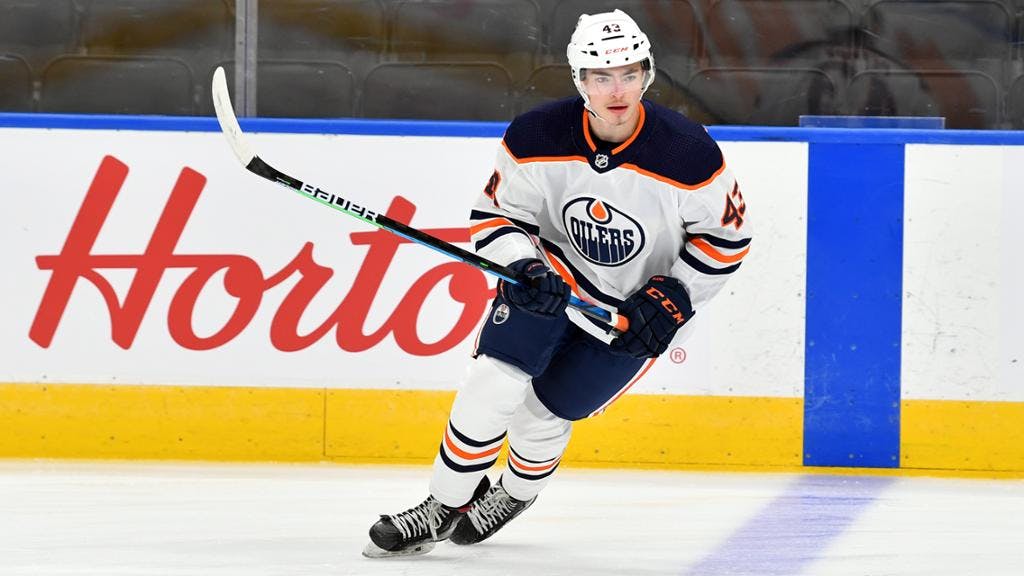 By Liam Horrobin
1 year ago
Welcome back to the world of prospects in Oily Land!
The points weren’t flying off the table as much as we’ve seen in the past. Carter Savoie was held pointless against North Dakota, Xavier Bourgault only played in one game, and the Condors offence struggled to produce.
Now, lets dive into the rest of the news that happened since we last spoke.

The Oilers and their 2021 6th round pick came to a three-year agreement on Tuesday, with Matvey Petrov signing an entry-level deal. Petrov has excelled in his first year in North America with the North Bay Battalion with 10 goals in 14 games to start the season. On Friday, The Battalion forward had a dominant four-point performance against Kingston on Friday night with a goal and three assists. His goal in that game might get Oilers fans a little excited. If he continues his current form, there is a great chance fans will see Petrov in Edmonton for the World Juniors with Team Russia.

By no means was anyone happy with the way the Oilers performed against the Red Wings on Tuesday evening. Detroit jumped on top of them early and was the better team for large portions of the game. A bright spot from that contest was the performance from Stuart Skinner. It’s fair to say that fans didn’t fully know what to expect from him. Skinner had a strong preseason, but in his first start last season against Ottawa, he allowed five goals and finished with a 0.868 save percentage – not good.
Admittedly, I was doubtful of Skinner’s capabilities; however, thankfully, I was wrong. The Edmonton native was strong in goal, making big stops throughout to keep the Oil in the game. We’ll likely see the third goal he conceded on TSN’s misplays countdown for a while now, but besides that, there was little to complain about. Skinner finished with a 0.946 save percentage and was why Edmonton didn’t get blown out by a young Detroit team.
With the news about Mike Smith having a setback in practice today emerging, it looks as though Skinner is around for a while.

With Skinner in the Great White North, the crease in sunny California has been left with Ilya Konovalov and Olivier Rodrigue. A rollercoaster is a good way to describe their performances as of late.
Konovalov had a good start against the San Diego Gulls on Friday. The Oilers third-rounder from 2019 stopped 24 of 26 shots and finished with a 0.923 save percentage making some great saves. He followed that up with a goose egg against Ontario the next night, getting pulled after allowing three goals on five shots. The Condors defence didn’t help him much, leaving two guys wide open to score.
Rodrigue came in as relief but didn’t fare much better, allowing three goals on 14 shots. He’s struggled mightily in his five games and has yet to finish with a save percentage over 0.870.
The Oilers goaltending prospect pool is small, with only Skinner, Konovalov and Rodrigue in the organization. The hope, of course, is that one of those three, likely Skinner or Konovalov, develop to become a starter one day. However, after taking Xavier Bourgault over Jesper Wallstedt in the first round last year, Ken Holland and his scouting team might want to take a hard look at adding to the position in the 2022 entry draft.

Ty Tullio has been fantastic with the Oshawa Generals this season.
Tullio is on a 12 game point streak after scoring in each game to start the season. He leads the Generals with three goals and 19 points as he pushes to make the World Juniors roster for Team Canada in Edmonton. His most recent point came in Oshawa’s 4-1 win over the Sudbury Wolves
The Oilers 2020 draft class is turning out promising with Dylan Holloway and Carter Savoie also showing signs.