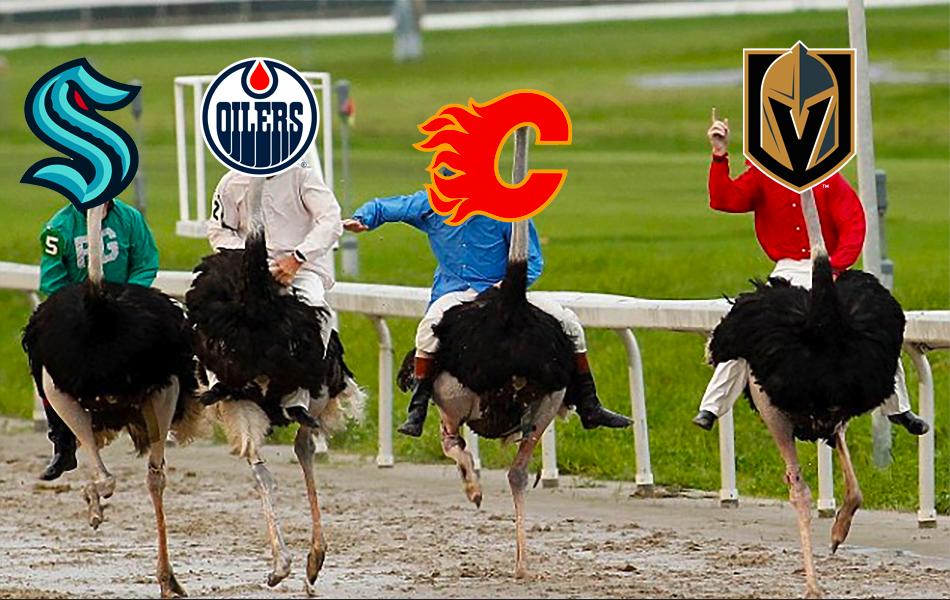 By Brennan Delaney
25 days ago
In the last Pacific Roundup, this phrase ended the Oilers section: “The Oilers have a favourable upcoming week, as all three games will be at home.” Yeah, that aged poorly.
The Oilers currently occupy the final wildcard position, which they had locked down heading into this week. However, the separation between the third spot in the division has increased, with Seattle having three games in hand as well.
Let’s look at every Pacific team’s week…

The Oilers have had a tough time at home since Dec. 5, and that continued this past week. First off, they jumped out to an early two-goal lead against the Seattle Kraken on Jan 3, a team they have been chasing down in the playoff race. That lead was quickly squandered as the new expansion team scored five unanswered goals to win 5-2. Connor McDavid and Ryan Nugent-Hopkins were the goal scorers, while Stuart Skinner was pulled after allowing four goals on 20 shots.
Their only win of the week came against the New York Islanders, putting four past Ilya So”four”kin in a 4-2 win. Leon Draisaitl, Dylan Holloway, Zach Hyman, and Kailer Yamamoto were the goal scorers, while McDavid and Nugent-Hopkins added two assists. Jack Campbell had the start, saving 20 shots on 22 attempts.
Raise your hand if you’ve heard this: The Oilers had a 2-0 lead at one point and squandered it in a loss. That was the case in the Jan. 7 game against the injured Colorado Avalanche. Hyman scored both of Edmonton’s goals (he has the last three Oiler goals), while Draisaitl added two assists. Skinner rebounded and quite frankly, stood on his head, as he saved 43 shots in 46 attempts in a 3-2 overtime loss.
Last week, it was noted that Edmonton played the entire week at home (they’re 3-5-2 in their last 10 home games). Thankfully, they’ll play four games away, all against Pacific teams. The Los Angeles Kings on Jan. 9, the Anaheim Ducks on Jan. 11, The San Joe Sharks on Jan. 13, and the Vegas Golden Knights on Jan. 14. It’s paramount that they beat both Anahiem and San Jose, while hopefully winning a game against either the Kings or the Golden Knights.

It’s pretty safe to say that Vegas and the Kings are the top dogs in the division and Vegas picked up four of six available points.  Their first win came on Jan. 2, when they beat the Avalanche 3-2. Nicholas Roy scored two, while goaltender Logan Thompson saved 27 of 29 shots. Michael Amadio scored the other goal in a 3-2 win.
The Knights beat the Pittsburgh Penguins 5-2, to pick up their second win of the week. Jack Eichel scored a goal and picked up two assists, while Paul Cotter, Phil Kessel, and Mark Stone picked up a goal and an assist. Chandler Stephenson picked up the other Vegas goal. Goaltender Adin Hill picked up the win, saving 38 of 40 shots and standing on his head.
The Knights lost their second game in as many weeks to the second-place Kings, this time losing 5-1. Jonathan Marchessault scored Las Vegas’ only goal, with Kessel and Roy picking up the assists. Goaltenders Hill and Thompson struggled, with the latter allowing three goals on 19 shots.
Vegas has a rather light schedule juxtaposed to the Oilers this upcoming week, playing the Florida Panthers on Jan. 12, and the Oilers on Jan. 14, both at home. The Saturday matchup against Edmonton will be the Oilers’ fourth game of the week and the second of a back-to-back.

Like the Golden Knights, the Kings picked up four of six points this past week. They beat the Central Division-leading Dallas Stats 3-2 on Jan. 3 to start their week off well. Adrian Kempe, Anže Kopitar, and Rasmus Kupari picked up the Kings’ three goals. Netminder Pheonix Copley continued his strong play, saving 28 shots on 30 shots on goal. Kevin Fiala picked up two assists in the game as well.
The Boston Bruins rolled into town and beat the Kings 5-2. Copley struggled in the game, only saving 17 shots on 21 shots on goal. Phillip Danault and Sean Durzi picked up the Kings’ two goals in the game.
The Kings rebounded and smacked the Pacific Division-leading Golden Knights 5-1. Fiala scored a hat trick, while Viktor Arvidsson and Matt Roy picked up the other two goals in the win. Furthermore, Gabriel Vilardi picked up three assists, while Blake Lizotte assisted on two of the goals. Copley had the start, saving all but one shot while facing 20 shots.
Sitting four points behind the Knights, the Kings have a big upcoming week. They’ll play the Oilers on Jan. 9, the Sharks on Jan. 11, and the New Jersey Devils on Jan. 14. All games will be played in Los Angeles.

The second-year team is pretty darn good, taking all six available points from the week. Down 2-0, they stormed back against the Oilers scoring five unanswered to win 5-2. Justin Schwartz scored a goal and added two assists, while Matty Beniers and Alexander Wennberg added a goal and an assist. Yanni Gourde and Jared McCann were the other goal scorers, while former Oiler Justin Schultz added two assists, and Adam Larsson picked up a single assist. Martin Jones saved 30 of 32 shots for a .938 save percentage.
They continued their winning ways on Jan. 5, beating the Toronto Maples Leafs 5-1 Vince Dunn, McCann, Beniers, Eeli Tolvanen, and Wennberg were the goal scorers, while Jones saved 26 of 27 shots for a .963 save percentage. Former Oiler Jordan Eberle added an assist in this game, while Larsson and Schultz were held off the score sheet.
On Jan. 7, the Kraken steamrolled the Ottawa Senators, winning 8-4. Both Eberle and André Burakovsky scored a goal and picked up two assists, while former Oiler Schultz picked up his fourth goal of the season and added an assist. Beniers, Dunn,  Oliver Bjorkstrand, and Daniel Sprong picked up the other goals, with Larsson getting an assist.
Like the Oilers, the Kraken will play four games in the week, all away against the Eastern Conference. They’ll start on Jan. 9 against the Montreal Canadians, Jan. 10 against the Buffalo Sabres, Jan. 12 against the Bruins (a scheduled loss at TD Place at this point), and Jan. 14 against the Chicago Blackhawks. The Kraken have the opportunity to leapfrog the Kings if all goes well this upcoming week.

The Flames had a similar week to the Oilers, picking up three points out of a possible six. They lost their first game of the week to the airportless Winnipeg Jets, with Mikael Backlund and Nikita Zadorov picking up their two goals. Jacob Markström finished the game with an .880 save percentage, allowing three goals on 25 shots.
Their only win came against the New York Islanders, when they also scored four against them. Sadly, Ilya So”four”kin wasn’t in goal, as it was a back-to-back for the long island team. Blake Coleman, Nazem Kadri, former Oiler Milan Lucic, and Zadorov scored the four Flames goals. Markström bounced back, allowing just a single goal on 25 shots for the .960 save percentage.
On Sunday evening, they lost 4-3 in overtime to the lowly Blackhawks. Once again, Markström struggled as he allowed three goals on just 11 shots before being pulled. Backup netminder Daniel Vladař picked up the slack, allowing a single overtime goal in the loss. Elias Lindholm picked up a goal and an assist, with Jonathan Huberdeau and Kadri picking up the other two goals. Tyler Toffoli assisted on two of the goals as well.
The Flames are sitting in the first wildcard spot, just one point ahead of the Oilers. Next week, they’ll play the St. Louis Blues away on Jan. 10 and Jan .12, as well as the Stars on Jan. 14, also away.

The Canucks did not have a good week, and are eight points out of a playoff spot as of Sunday. In the first game of the week, they allowed the New York Islanders six goals in a 6-2 defeat. Trade candidate Bo Horvat scored two goals, while Brock Boeser, Oliver Ekman-Larrson, Quinn Hughes, and J.T. Miller all got a single assist. It wasn’t a great game for Spencer Martin, as he allowed five goals on just 28 shots.
They won their game against the Avalanche on Jan. 5, with Collin Delia saving 30 of 32 shots for a .938 save percentage. Andrei Kuzmenko picked up two goals, while Boeser and Miller also managed to score. Ekman-Larrson, Ilya Mikheyev, and Elias Pettersson all had two assists on the night, while former Oiler Ethan Bear picked up a lone assist.
The highs of a rare win didn’t last long for the Canucks, as they were blown out by the Jets on Sunday afternoon, 7-4. Both Martin and Delia struggled in the game, allowing 7 goals between the two on just 27 shots. Miller picked up a goal and an assist, while Sheldon Dries, Horvat, and Jack Studnicka, all potted a goal. Bear also added an assist.
It was a tough week for the Canucks, and the next week should be relatively difficult as well. They’re heading on an Eastern Conference road trip, playing the Penguins on Jan. 10, the Tampa Bay Lightning on Jan. 12, the Panthers on Jan. 14, and the Carolina Hurricanes on Jan. 15.  The Canucks are quickly approaching the section of “the bad teams of the Pacific Division”.

The Sharks (who are only five points behind the Canucks now), lost both their games, picking up just a single point out of an available four. Former Oiler Matt Benning picked up an assist in both games this week. Trade candidate and handsome man, Erik Karlsson, picked up a single assist in an overtime loss to the Ducks.
The Ducks actually picked up more points than the Oilers this week, as they won two of their four games. It was a relatively good week for Anaheim, before being smashed by the Bruins 7-1 on Sunday evening. Former Oiler Dmitry Kulikov did not pick up a point this past week. Their next game will be against the Oilers on Jan. 11 at 8:00 PM MT.

Below are the standings of the Pacific Division as of Monday, Jan. 9…

The Oilers are running out of time to make a push to finish in a top-three position in the Pacific division. At this point, they may just hope to hold on to their wild card spot, but losing points to the Avalanche (who have three games in hand) is not a good situation to be in.
Ideally, the Oilers will have no problems with the Sharks and the Ducks, as those are teams that they should beat. It’d be nice to also pick up a win against either the Knights or the Kings, but we’ll see. Over their past 10 away games, Edmonton has a 6-3-1 record, and have won four of their last five.
Hopefully, they can continue the solid road play and be in a much better position come next Monday!
If you enjoy my content, you can follow me on Twitter @Brennan_L_D.
Editorials
Featured
Recent articles from Brennan Delaney