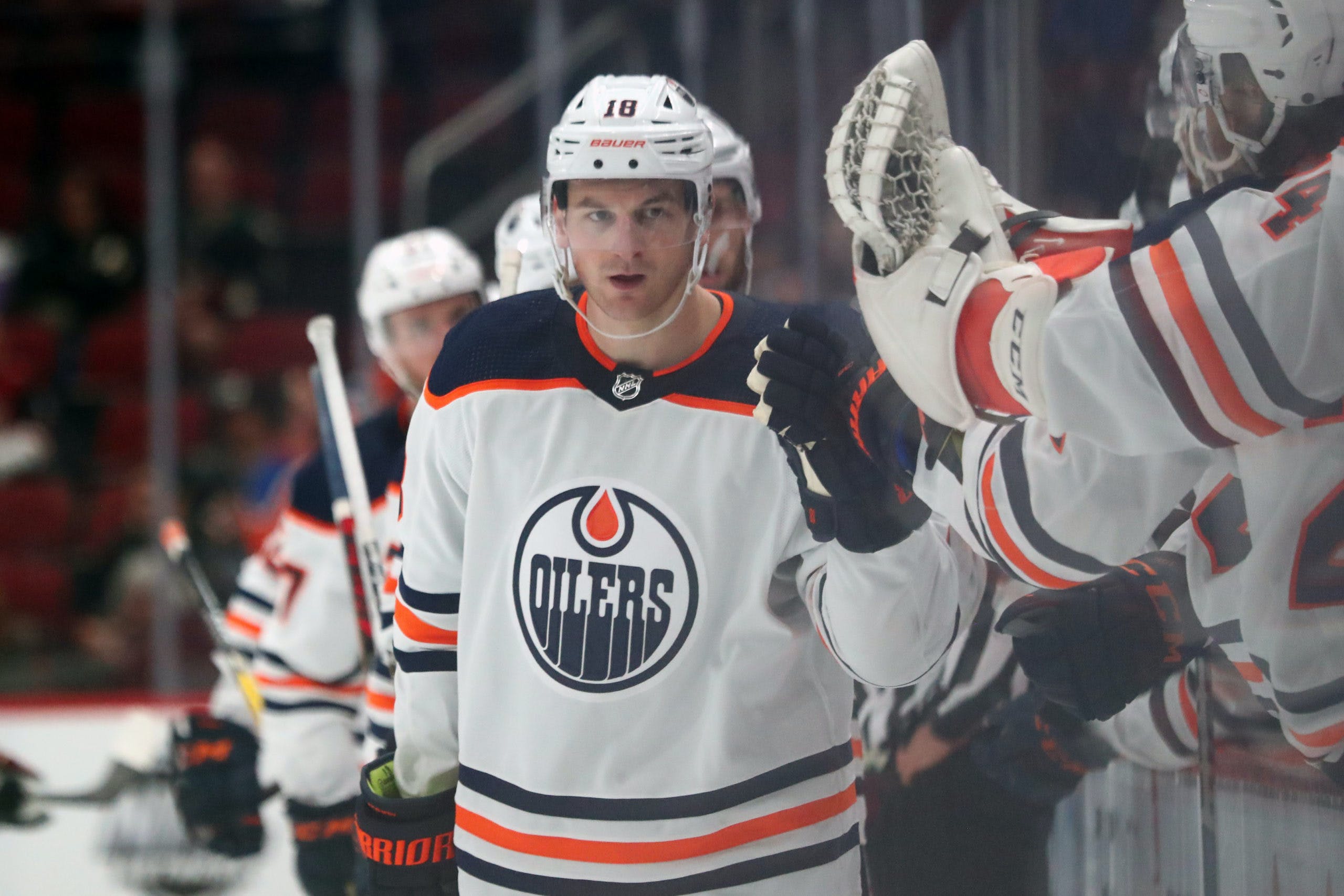 By Tyler Yaremchuk
1 year ago
Earlier this week on Daily Faceoff, former NHL Executive Steve Greeley shared his latest Team Canada Olympic projection and the one thing that jumped off the page to me: he had Zach Hyman on the team. Not only did he have him on the team actually, but he also had him on the top line right next to Connor McDavid.
Some Oilers fans had been wondering about the possibility of this since the start of the season and I hadn’t really considered it as a real possibility but after seeing Steve put Hyman on the roster, I started to think about it a little bit more and honestly, I think there is a really strong case for Hyman to be on Team Canada in Beijing.
First, there’s the most obvious part of this argument. Hyman has shown over the last few weeks that he has chemistry with McDavid. The goal they connected on in St. Louis was a prime example of what allows the two to work so well together.
Hyman has the speed needed to not just keep up with McDavid on the rush, but as you can see here he’s skilled enough to drive the play on his own. He comes in wide and totally takes the attention away from McDavid, which allows him to glide into a dangerous scoring chance, and then Hyman makes a perfect pass.
In a short tournament like the Olympics, chemistry is huge. Everyone remembers when Chris Kunitz made the Olympic team simply because they wanted someone who they knew would click with Sidney Crosby. If you’re Doug Armstrong, who is the GM for Team Canada, you need to be thinking about how you can maximize the impact of Connor McDavid and having Hyman on the team would do that.
Consider it almost like an insurance policy. Just because you put Hyman on the team, doesn’t mean you have to play him with McDavid. You could keep him as one of your extra forwards and try McDavid on a line with whoever you want and if things don’t work out, you have Hyman right there.
Of course, there’s still the spot on the other side of the ice as well. Can you imagine the damage that McDavid and Nathan MacKinnon could do if they had Hyman creating turnovers with his strong forechecking? That trio would give opposing defensemen nightmares.
On top of being a great fit alongside McDavid, Hyman is also a really good penalty killer. Hyman is 40th in the NHL in shorthanded time on ice for forwards and is the forward that Dave Tippett has relied on the most to kill penalties this season.
A lot of the talk around Team Canada’s roster is mainly centred around purely skilled players but they will need to pick some players who can be relied on to kill penalties. Hyman checks that box.
Hyman is currently tied for eighth in goals scored by a Canadian forward this year. He has the numbers to deserve a spot on this team. Could there be a player on another team that would work better with McDavid? Potentially. But there’s no guarantee at all. Hyman is the safe choice.
His direct competition to make the team would probably be players that would fill a similar role. Guys like Ryan O’Reilly or Sean Couturier, even though they’re natural centres, could be guys that Canada could take over Hyman since they would take one of those penalty killing, hard forechecking spots.
The last time we saw a Canadian Olympic team with NHL players, their biggest strength was their ability to play fantastic shutdown defence. Hyman would fit that mould. On a team that could be one of the best collections of skilled players that we’ve ever seen from Team Canada, Hyman would bring an element of defensive responsibility and even a little bit of grit. Traditionally, that’s something that Hockey Canada has valued.
I didn’t think that Hyman would be in the mix for this team a few months ago but now, I think the Team Canada brass would be foolish to not have him on the team. Even if he just sits as an extra forward, he’s the ultimate insurance policy to make sure you have someone who you know can click with Connor McDavid.

Looking to up your fantasy hockey game? DailyFaceoff has the tools you need for both daily and season-long fantasy leagues, including a lineup optimizer, daily projections, and a whole lot more. Sign up for the DailyFaceoff tools here.
Nation Takes
Oilers Talk
Recent articles from Tyler Yaremchuk