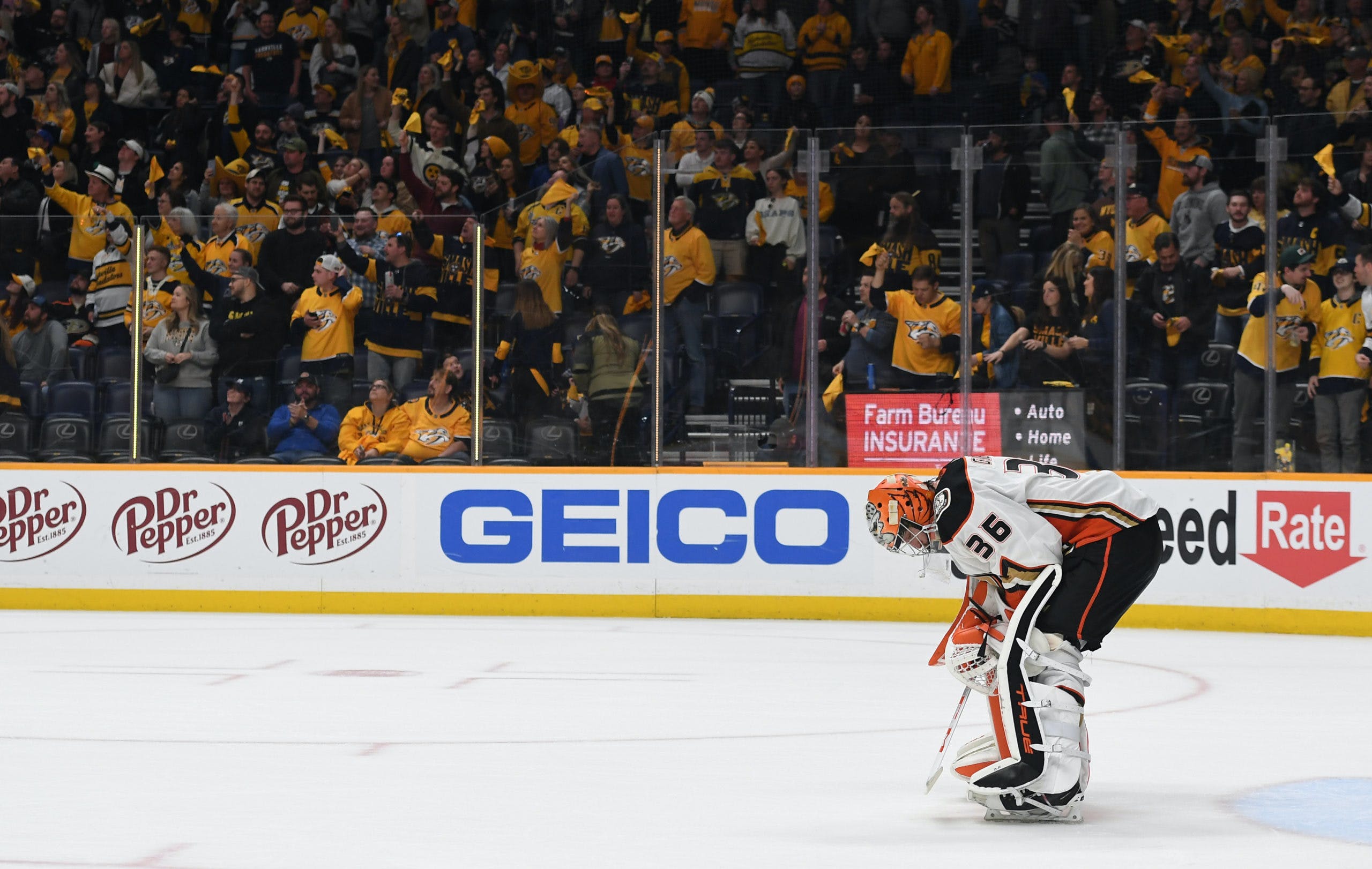 By Tyler Yaremchuk
5 months ago
Honestly, there is so much going on around the NHL in terms of trade talk, potential coaching hires, and free agent rumblings that I’ve decided to up my rumours blog to twice a week. There will be a lot of Oilers talk in every episode but I’ll make sure to mix in big stories from every team in the league and let you know how, or if, they could affect the Oilers.
Today, I’m starting with the talk out of Anaheim that goaltender @John Gibson could be available. John Gibson’s name carries a lot of weight around the league and that makes sense considering between the 2015 and 2018 seasons, he had a save percentage of .920 or better every year. He was a perennial all-star on a team that was competitive. Fans tend to have long memories for players like that so when Gibson’s name pops up, it makes sense that people think he’d be a slam dunk fit for the Oilers, who need a goaltender.
I’m here to say that a deal is unlikely and probably not something the Oilers should be pursuing too hard.
First off, The Athletic is reporting that Gibson has not told the Ducks that he wants to be traded. So that is worth considering. That doesn’t change the fact that the Ducks may be looking to cash in on his value.
If that were the case, well then they would have to ask Gibson to submit his ten-team no-trade list and considering he’s an American-born player, it’s fair to expect that some Canadian teams may be on that list. Just the way things usually go.
There’s also the fact that Gibson has been supremely average over the last few seasons. While his career save percentage is up at .915, he hasn’t had a single season over .905 since 2018/19. Now, part of that is due to the fact that the Ducks are in the bottom third of the league in shots against, scoring chances against, and high-danger corsi against in that span but there are people around the league who believe that Gibson has lost a step.
He could bounce back with a better team, like the Oilers, but there’s risk involved here especially when you consider his contract.
Gibson, who turns 29 in July, has five more years on a contract that carries an AAV of $6.4 million. That’s a lot of money and honestly, I don’t think there’s any UFA goaltender this year who gets more than that. Darcy Kuemper, Jack Campbell, and Ville Husso will all come in under that this summer and they won’t cost assets to acquire.
If the choice is between giving one of those three free agent options a $4-5.5m AAV or trading away multiple high-end assets to get Gibson at $6.4m, I’ll take the first option.
Here’s what I’m keeping an eye on around the league.

All hockey fans in Winnipeg are talking about right now is Barry Trotz. There is a brewery offering him free beer if he agrees to be the team’s next Head Coach. They want him bad.
The Jets are a fascinating team to watch this summer because if they pull the right strings, they could definitely be competitive next season. Any team with Connor Hellebucyk is capable of turning things around in a hurry. If they pull the wrong strings, they could be heading towards a rebuild, no matter who their Head Coach is.
I’m fascinated to see what they do with @Mark Schiefele as well. That relationship appears to have soured and he was #25 on Frank Seravalli’s first Trade Targets list of the offseason. They would likely get a nice return for him and it might breathe some new life into their locker room. 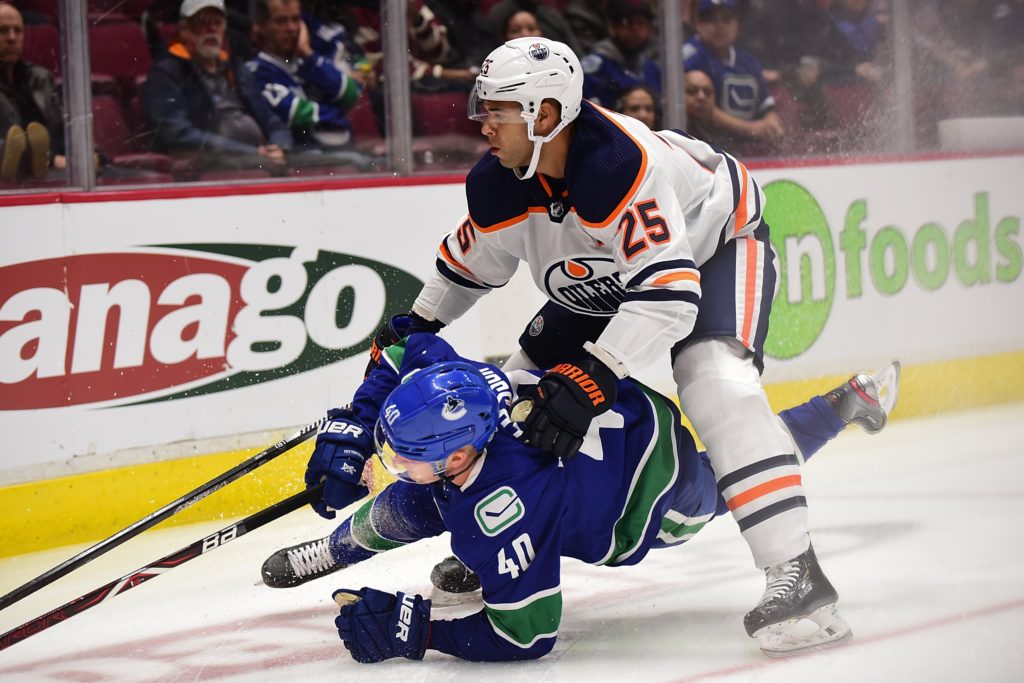 Sep 17, 2019; Vancouver, British Columbia, CAN; Edmonton Oilers defenseman Darnell Nurse (25) checks Vancouver Canucks forward Elias Pettersson (40) during the first period at Rogers Arena. Mandatory Credit: Anne-Marie Sorvin-USA TODAY Sports
Jim Rutherford and Patrik Allvin will be very busy this summer, or at least they plan on being busy. There is talk that Rutherford didn’t like the vibe around the locker room last season and wants to make some splashes.
Is anyone safe? Well, that’s unclear but I would assume @Elias Pettersson, @Thatcher Demko, @Quinn Hughes, and @Bo Horvat aren’t going anywhere. Everyone else could very realistically be dealt.
That means @Brock Boeser, who’s a pending RFA, along with JT Miller, Conor Garland, and @Tanner Pearson could all be trade bait this summer.
The Canucks don’t have a lot of money to spend with just $10.59 million in projected cap space according to Cap Friendly and a potential $7m-plus qualifying offer that needs to go out to Brock Boeser if they want to retain him.
Lots of big decisions coming in Vancouver and that obviously has an impact on the Oilers as they’ll be competing against each other in the Pacific Division.