By Tyler Yaremchuk
2 months ago
We are just a few weeks away from NHL training camps opening up and that means we will likely see a bunch of signings and PTOs in the coming days as teams look to finalize their camp rosters.
There are a handful of players who I believe can be impactful everyday NHLers still on the market.
For forwards, there is Evan Rodrigues who is coming off a 19-goal season. He’s the best of the bunch in my opinion. He can play with skill in a top-six role or contribute some depth scoring on a team’s third line. I’m shocked he hasn’t been picked up yet.
Other names that I think will be very good value signings for teams include 26-year-old Sonny Milano, Daniel Sprong, Sam Gagner, Jonathan Dahlen (although he may sign overseas), and Zach Aston-Reese. I also wonder if Alex Galchenyuk finds a home somewhere.
The Oilers of course have been linked to Sam Gagner. I also think they should be looking at Zach Aston-Reese to come in and compete for a bottom-six spot on the team. I would imagine that the other players look for a spot with a clearer-cut path to being in the top six. Surprisingly, I’m not sure if that opportunity exists in Edmonton at the moment.
With McDavid, Draisaitl, and McLeod playing down the middle. That leaves six wing spots in the top nine with Nugent-Hopkins, Kane, Hyman, Puljujarvi, Yamamoto, and Foegele all under contract. Dylan Holloway and Xavier Bourgeault could also compete for spots. Derek Ryan, Mattias Jannmark, Devin Shore, and Tyler Benson could all be in the mix for fourth-line spots. I could see a few other PTOs or one-year contracts being handed out for potential fourth-line options as well.
Of course, if the team trades away a piece like Warren Foegele, then it could open up a spot in the top nine for a PTO or free agent addition. If that doesn’t happen though, I would say it’s unlikely likely that they sign one of Milano, Sprong or Rodrigues.
On the blueline, there are some other interesting options. PK Subban headlines the list of remaining UFA’s. He’s obviously a big name and while he has lost a step over the last few seasons, I actually think he could thrive in a sheltered, third-pairing role with a team.
Calvin De Haan is a veteran defender who can play both sides of the ice. He can help out on the penalty kill as well. Like Subban, he’s lost a step but I still think he’d be a fine everyday defenseman on a playoff calibre team.
Anton Stralman, Thomas Hickey, Danny Dekeyser,  Ryan Murray, Kris Russell, and Ben Harpur are other names that you’ll likely see get either a PTO or a one-year contract somewhere.
I think the Oilers should be looking at Calvin De Haan, but I could also see them going the PTO route with Harpur or Dekeyser. I wouldn’t hate to see Russell back in Edmonton, but it doesn’t sound like that’s going to happen.
My prediction for the next few weeks: Sam Gagner returns on a PTO or one-year deal, either Harpur or Dekeyser come in on a PTO, and if Foegele is traded them we see one more winger with top-nine potential come in on a one-year deal. 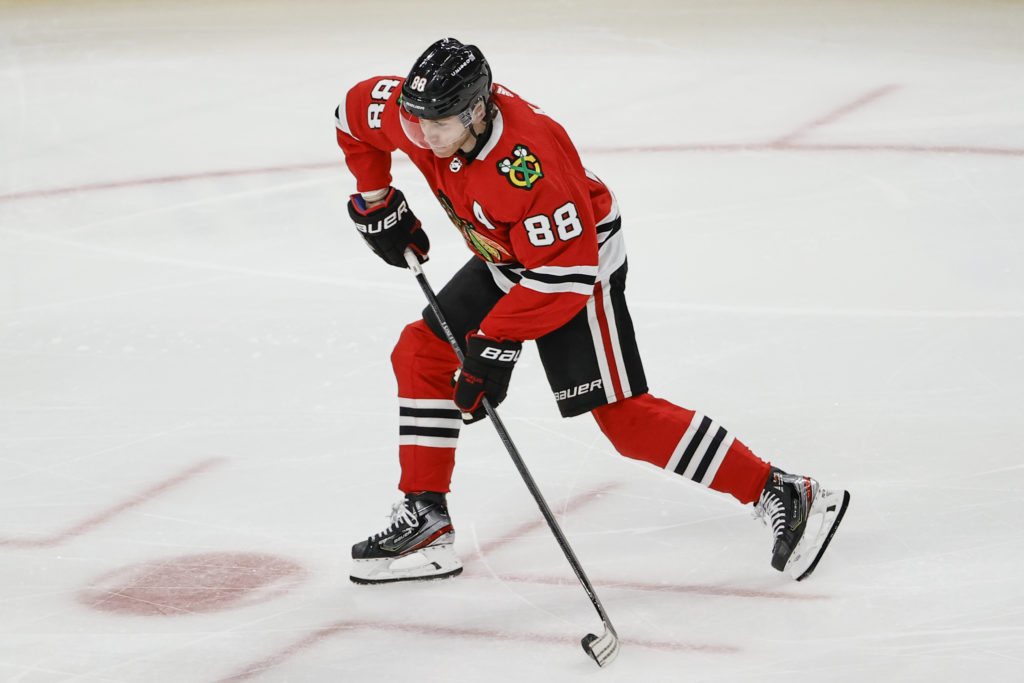 May 10, 2021; Chicago, Illinois, USA; Chicago Blackhawks right wing Patrick Kane (88) looks to score against the Dallas Stars during the third period at United Center. Mandatory Credit: Kamil Krzaczynski-USA TODAY Sports
There are two big names being talked about on the trade market right now: Patrick Kane and Jakob Chychrun.
Are the Oilers interested in Kane? Yes. There are plenty of reports indicating that. Should you be holding your breath for a Kane deal to happen soon? No. It sounds like Kane and the Blackhawks would prefer to wait until closer to the deadline to make a deal happen.
When it comes to Chychrun it’s really the same old, same old. The Coyotes have a high asking price and that’s scaring teams away. There were reports that the Senators were very interested and that the ask was two first-round picks and a prospect. The Coyotes were also apparently open to taking back Nikita Zaitsev and his $4.5 million cap hit.
In Oiler’s terms, I would assume the ask would be two firsts and Philip Broberg. I think that’s a fair ask and if I was in charge of the Oilers, I would think long and hard about doing a deal like that provided the Coyotes take back a contract. I don’t think it’s likely that Chychrun ends up in Edmonton though.
Cap Friendly currently has 13 teams listed as over the salary cap. The Oilers are one of them. Now, most of these situations will be fixed with a few players going on LTIR, but I still think those teams could be looking to move out a contract or two before the season starts.
The other 12 teams along with their potential LTIR options are the Vegas Golden Knights (Shea Weber and Robin Lehner), Tampa Bay Lightning (Brent Seabrook), Washington Capitals (Niklas Backstrom and Carl Hagelin), Montreal Canadiens (Carey Price), Florida Panthers, Vancouver Canucks (Michael Ferland), Carolina Hurricanes (Max Pacioretty and Jake Gardiner), Philadelphia Flyers (Ryan Ellis), Boston Bruins, San Jose Sharks, Toronto Maple Leafs, and Pittsburgh Penguins.
Some players like Pacioretty and Backstrom could be back later in the season while a lot of the players I listed, like Carey Price, will not play at all this season.
The point is: the Oilers aren’t the only team looking to do some salary cap gymnastics over the next few weeks and that could really complicate the market.

Subscribe to the Nation Network YouTube channel to make sure you never miss another video or podcast.
Nation Takes
Oilers Talk
Recent articles from Tyler Yaremchuk