Advertisement
Ad
Around The Pacific: The Oilers are sliding into oblivion 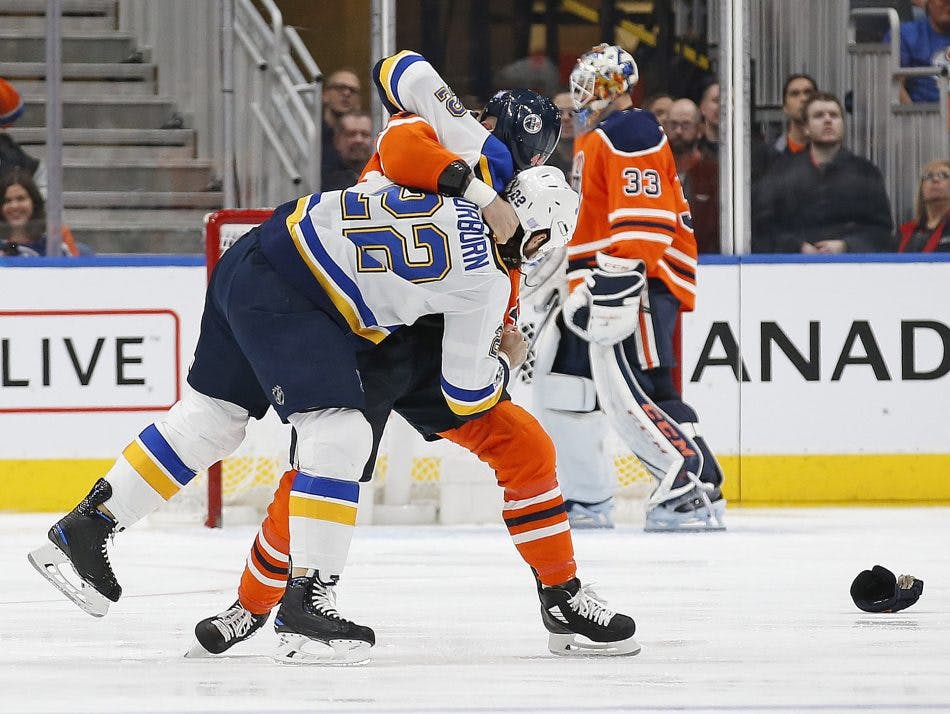 Photo credit: Perry Nelson-USA TODAY Sports
By Cam Lewis
5 years ago
Comments
This is a weekly feature in which I’ll look at the performances and narratives of the teams in the Pacific Division.
The pack of the Pacific Division, meaning the six teams in playoff contention, are separated by just six points. I want to consider the Edmonton Oilers one of those teams, but the gap is widening.

12-7-2 (26 points) / +14 goal differential / 49.6 CF% (16th) / 101.2 PDO (10th)
For the first time all season, the Los Angeles Kings have hit a lull. Last week, they lost three of four games, getting dropped by the Vancouver Canucks, Boston Bruins, and Vegas Golden Knights. The only win they had was against the Florida Panthers, which is sort of a theme in this article.
The goaltending has continued to be excellent, but the offence has dried up a little bit. In their last six games, five of which were losses, the Kings have scored more than two goals just once. And that was against Florida, so does it even count?
Advertisement
Ad
Advertisement
Ad

Seems like we're getting a lot of chirps today for being behind the Kings in the standings...we're an expansion team. In second place. In our first year. With games in hand. First-year team. Cinderella boys.

shouldn't other teams be getting chirped instead?

12-6-1 (25 points) / +10 goal differential / 48.9 CF% (21st) / 101.6 PDO (7th)
For the first time in franchise history, the Vegas Golden Knights lost a game to a Western Conference opponent. They got pounded 8-2 by the Edmonton Oilers and it seemed to signal that the two teams were about to switch places. But that hasn’t happened. Vegas rebounded by beating Vancouver and Los Angeles and are still second in the division.
It makes no sense, but here we are. The Golden Knights activated Malcom Subban from the injured reserve and Marc-Andre Fleury isn’t far behind him. They somehow managed to navigate rolling with a fourth string goalie on top of already being bad. This really is turning into quite the story.
Advertisement
Ad
Advertisement
Ad
To put it in perspective, the Golden Knights only need two more wins to match the total wins the Atlanta Thrashers had in their first season back in 1999-00.

11-8-0 (22 points) / -4 goal differential / 51.9 CF% (7th) / 100.1 PDO (18th)
It was a rollercoaster of a week in Calgary. The team downed the Western Conference leading St. Louis Blues with a commanding 7-4 win and then proceeded to get pounded by the mediocre Detroit Red Wings by a score of 8-4. They finished things off with a gutsy come from behind win against the Philadelphia Flyers in overtime to ultimately go 2-1 on the week.
On the bright side, the Flames are scoring goals. In their last four games, they’re averaging 4.75 goals-per-game, which is huge for a team that was relying largely on one line for most of the season. But on the not-so-bright side, both the blueline and goaltending has been suspect the past few games.
Advertisement
Ad
Advertisement
Ad

9-7-3 (21 points) / +1 goal differential / 47.6 CF% (25th) / 101.6 PDO (8th)
Another week, another how the hell are the Ducks still above water question. Anaheim had a perfect week, beating the Boston Bruins 4-2 and then edging the Florida Panthers 3-2 on Sunday. Despite not having Ryan Kesler or Ryan Getzlaf, the Ducks keep winning. Their .923 team save percentage certainly helps, but it’s pretty remarkable that a team that features Derek Grant in its top five scorers is doing as well as it is.

What does Anders Nilsson need to do to play 2 games in a row? Look at his record compared to Markstrom, it’s not rocket science. #Canucks

9-8-3 (21 points) / -6 goal differential / 49.4 CF% (18th) / 101.2 PDO (11th)
The Vancouver Canucks continue to stick around. Save for a four-game winning streak and three-game losing streak in October, the Canucks really haven’t gotten either too high or low. They win one, lose one, win two, and so on, and currently boast a thoroughly solid 9-8-3 record. Last week, they beat the L.A. Kings, who lead the Pacific Division, got dropped by the Vegas Golden Knights, and managed to squeeze out a point against the St. Louis Blues.
Advertisement
Ad
Advertisement
Ad
An interesting thing to follow in Vancouver is the team’s goaltending situation. Jacob Markstrom has been solid, owning a .910 save percentage through his 15 games, but Anders Nilsson has been really good. Nilsson, who figured to be Markstrom’s backup after a good season in Buffalo, owns a .929 save percentage in six games. He’ll start to get more opportunities if this keeps up.

10-8-0 (20 points) / +4 goal differential / 52.6 CF% (4th) / 97.6 PDO (26th)
When I looked last week, it appeared the Sharks were on the rise. They had won six of seven games and were quickly climbing the division ladder. But last week, they only played two games and they dropped both of them. They were shut out by the Florida Panthers and they got dropped 3-1 by the Boston Bruins. Neither of those teams are good.
Advertisement
Ad
Advertisement
Ad
The worry for the Sharks is scoring. They’re currently dead last in the league with 31 goals for. Logan Couture has 10 goals, but nobody else is producing.

7-11-2 (16 points) / -14 goal differential / 55.2 CF% (2nd) / 97.2 PDO (29th)
Have they broken out of it yet? Nope. The Oilers gave a bit of tease last week when they hammered the Vegas Golden Knights 8-2, but then we remembered that they’re an expansion team using a fourth-string goalie. Edmonton went on to lose to the St. Louis Blues and Dallas Stars to go 1-2 on the week.
The Oilers now sit as close to the basement-dwelling Coyotes as they do to a playoff spot. Generally, if you’re out of it before American Thanksgiving, you don’t get back into it by playoff time. The clock is ticking for the Oilers.
Advertisement
Ad
Advertisement
Ad