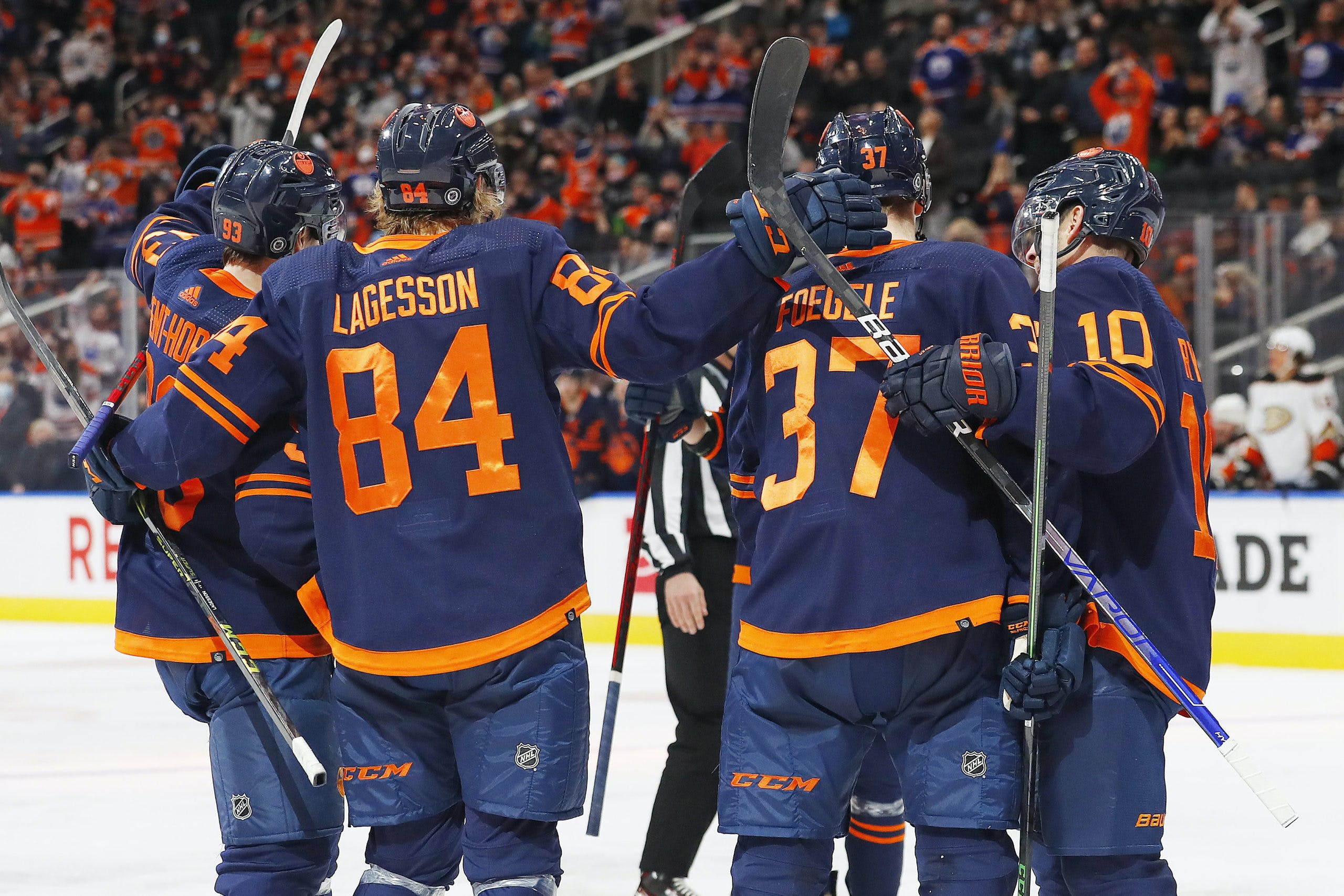 Photo credit: Perry Nelson-USA TODAY Sports
By Zach Laing
9 months ago
Comments
Well, that was fun! Final score: Oilers 7-3.
There were some early doubts, especially after Edmonton went down 2-0, but what a way to respond. BaggedMilk has the Wrap Up here.

oilers now down 2-0 after another ppg from the ducks. pic.twitter.com/TWQvI4o0Zr

tie game! a beautiful tip by derek ryan gets the oilers right back in this game. 2-2. pic.twitter.com/MeGbMBwLvJ

what a shot by trevor zegras, who brings it back to a two-goal game. pic.twitter.com/GGSTcahfWS

it's an absolute shooting gallery tonight, folks. zach hyman joins in the fun and makes it a 7-3 game. pic.twitter.com/eqDZGBMxOX

On how much wing he’s played: “I had played about 20 games or so in Carolina, but it’s come along pretty good in the last little bit. I feel pretty comfortable playing the wing, plays on the wall, and playing through the neutral zone a bit. I’ve always said it’s easier to go from centre to the wing, so I’ll stick with that I guess.”
On what’s working for his line: “I don’t know what the single thing is. We’re working hard together, supporting each other. I think we’ve been good on the forecheck getting pucks back — I think that’s huge, especially this time of year in this league. I think you have to score ugly goals, and I think we’ve done that. it feels nice. Got some confidence going, and that helps as well.”
Advertisement
Ad
Advertisement
Ad
On contributions through the lineup and if it feels notable for the team: “I think so. I can speak for myself, I can’t speak for the whole group, but it feels like we feel that everyone is getting a chance and opportunity to provide help. Obviously, we can’t rely on Connor and Leon to do everything. We need support for those guys, and for everyone in the top six. I think it’s good for myself to just get some confidence built up, to play more, get more opportunity offensively. I think that’s helped.”
On what he’s noticing in the team: “We’re just so much more detailed than we were earlier in the year. Everyone is on the same page. We’ve been working on certain things we struggled on earlier in the year: track reads, defensive zone structure, where guys are supposed to be, supporting each other. It just felt like earlier in the year guys were panicky, didn’t know where to go. I think it’s been a lot more clear and evident lately that that structure coming into our d zone and transitioning into the neutral zone is just so huge. All the teams we’ve played lately, they create so much offence through that transition. I think that’s been big for us in the structure and detail is just evident.”
Advertisement
Ad
Advertisement
Ad
On having a team that supports 29/97, rather than one that depends on them: “I think so yeah, I feel the same way. I don’t know about you guys, but I don’t feel the game of hockey you can win the Stanley Cup with two guys. That’s the beautiful thing about hockey. You can’t have just the best player and win. You have to have the best team. I feel guys have created some confidence, gotten more opportunity. Those guys are amazing, we can speak to that all day but we need to be there to support them and we also need the opportunity to do so.”
Advertisement
Ad
Advertisement
Ad
On feeling on the bench when the second unit started the powerplay in the third period: “Oh yeah, we noticed it — or I at least noticed it. This is the first team I’ve on where that’s not a regular occurrence. So I think that’s a good thing for the guys to give them more opportunity. They had a goal… so that’s maybe the first goal all year from the second unit and they haven’t gotten much opportunity on that, so I think that’s huge. We talk about the playoffs here, latter half of the season, it’s huge to have not just one unit stay out there for two minutes. It’s both units going and that also gives Connor and Leon a chance to rest, Nuge too, all those guys on the top unit. It’s tough when they’re out for two minutes then are expected to be out again the shift after, the second shift after. It drags on you, so that’s important to have two units that can play and contribute.”
On if his confidence is from opportunity, or his play: “For sure a bit of both. It was just hard earlier in the year when you’re not playing much, you’re sitting on the bench and it’s pretty hard when you’re sitting there for 15, 20 minutes and you’re expected to go out there and contribute. I don’t know, older legs, maybe it’s just me. But it’s hard. Those legs get stagnant and you don’t have the confidence to try to make a play. When the pucks going in, or you’re making plays and the line is scoring. That confidence kind of snowballs and helps with the game as well. But I think it’s a combination of both.”
Advertisement
Ad
Advertisement
Ad
On if he had a conversation with Woodcroft about his role, or what he could bring: “I didn’t have that conversation, but I think it’s evident in how he’s running the bench that he wanted to get the 9, 10, 11 guys in the forward group going more. I know it’s something I’ve talked with guys in the bottom-six — we needed that, or we felt like we needed that. I can’t speak for woody, but I feel it’s been pretty clear by how he’s run the bench.”

On finding ways to win: “I think we did a really good job fighting off their storm on the powerplay with a couple of goals. We didn’t get discouraged, we battled back, set ourselves up in the second period going into the third, and I thought we did a good job finishing.”
Advertisement
Ad
Advertisement
Ad
On contributions through the lineup: “I think everybody is engaged, I think everybody is contributing. I think there’s no better example in this four-game winning streak than tonight. And like I said, it was a good test early for our group getting down a couple goals early and sticking with it and sticking to our game plan.”
On the team playing 11f: “It keeps you on your toes in that you gotta know who is up. I think when you’re all playing the same way and have the same mindset, it’s easy to play with anybody. I think that’s what we’re doing right now and it’s one of the reasons we’re having success.”
On his powerplay goal, PP2 getting time and if it’s the sign of a change going on: “I don’t know. I kind of flip-flop between the first and second. Me, Jesse and Hyms kind of rotate a little bit there, then the other guy goes out for the second. We had some success tonight early and they decided to put us out there. Having depth, having options, having different looks is awesome. Connor and Leon are going to get their time, and deservingly so.”
Advertisement
Ad
Advertisement
Ad
On supporting top players like 29/97 instead of relying on them: “This league is not like the NBA where you can have two guys and can win a championship. You see how hard it is to win, and the teams that win don’t always have the best players. It’s important for everybody to contribute and everybody to pull their weight and be aport of the tea. They’re great assets to have because they can break a game open at any moment. But i think you’re seeing our team start to really gel. we got to keep this thing going.”