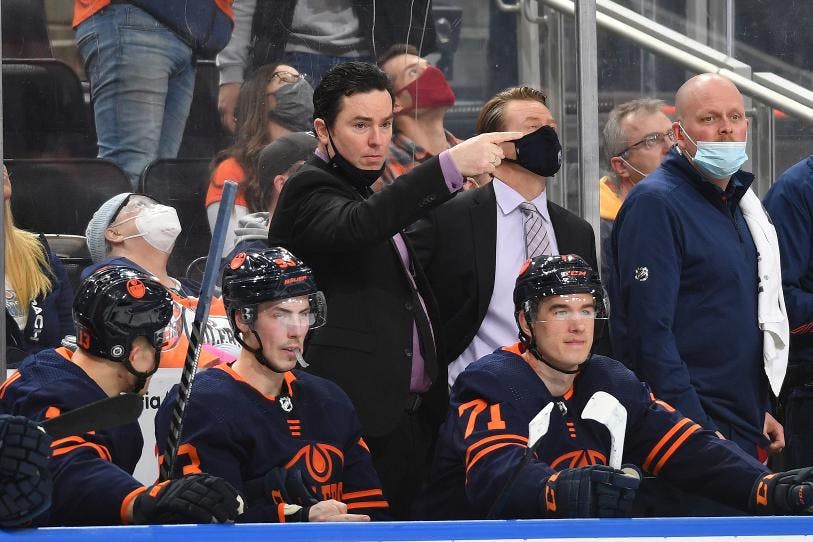 Photo credit: EdmontonOilers.com/Andy Devlin
By Zach Laing
9 months ago
Comments
Go crazy, Edmonton!
In his first game behind the Edmonton Oilers bench as a head coach, Jay Woodcroft secured his first win. There is lots to talk about from this game, as BaggedMilk did in the Wrap Up, but here, we’re going to get some eyes on the game, and the post-game pressers.

really like this defensive zone play from leon draisaitl. keep it simple, jump when you need to, and it’s a rush going the other way. pic.twitter.com/WOT12H74RL

niemelainen two minutes for being bigger and stronger. pic.twitter.com/gplID1ZYpl

the oilers are on the board first! a cody ceci shot from the point finds its way into the net. 1-0 lead. pic.twitter.com/dEzJsK2EP4

another lazy backcheck from leon draisaitl breaks up the rush pic.twitter.com/v9eP0060Va

anthony beauvillier gets one back for the islanders ripping one far side on the powerplay. oilers still lead 2-1. pic.twitter.com/QDMLduCRZ1

jesse puljujarvi is off the schneid! he scores his 11th of the year on the powerplay. pic.twitter.com/prNfixia5j

j-g pageau clips mike smith, and leon draisaitl was having none of it. pic.twitter.com/fQNmKEbbSl

Advertisement
Ad
Advertisement
Ad
On Mike Smith’s game: “Phenomenal. I think it carried over from the Chicago game where he gave us a chance to stay in that game. I think he was really helping our young d out there playing the puck as well. I don’t know if a lot of people notice. Just solid.”
On the game: “We get a win tonight for Woody and Mans coming up. It’s not easy coming up on a gameday and with the relationships they had with Tipp and Jimmy. Good for them and good for our group.”
Advertisement
Ad
Advertisement
Ad
On some things fans may not know was different, but what the players noticed: “I think coming in on gameday on short notice, there’s not a ton you can change. You have a morning skate and get out there. To keep it simple, I think Woody and Mans came in to highlight a few things and one of the key things was tracking through the middle, tracking through the neutral zone, and helping prevent rushes. I thought our d did a great job standing and protecting the blueline. I think it’s a big difference when you’re standing, protecting the blueline and you make them go through you. Once an offensive player gets the blueline, a guy like Barzal or any of those skill guys, they try to cut to the middle and it makes it difficult on d. I think that one point, if you’re looking from the outside might not see it, but we really focused on that from the outset.”
Advertisement
Ad
Advertisement
Ad

On the last few days: “Obviously mixed feelings. Emotional 24 hours I guess and Tipp and Jimmy have been a big part of my career. I owe a lot to Tipp and what he’s done for me. He went out on a limb for me when I left Tampa to go to Arizona and kind of established me as a number one goalie. He believed in me there and to bring me to Edmonton and give me another opportunity was something that you can’t put words to it. He’s a great man, both Jimmy and him. From that standpoint, it’s difficult but it’s part of the business and we’ve all been through it a time or two. Like Hyms said, for Woody to come in, and Mans to come in on short notice on a gameday and get a message sent across, I thought our guys were humming right from the drop of the puck. It’s nice to see and obviously, the win is the most important thing. So that was great too.”
Advertisement
Ad
Advertisement
Ad
On getting back into game action and seeming to find his game tonight: “I think any player will tell you that… but like I said yesterday, as a player you kinda can get your wits about you, shorten your shift, maybe get a bump and a grind, go to the net and do little things that get you in games. But as a goalie, there’s really no feeling-out process. There’s good teams coming at you. The first game I come back and played, everything was moving super fast out there and the puck felt like a bubble hockey puck. That’s not a good feeling as a goalie in the NHL. I knew to stick with it and keep it as simple as possible.”