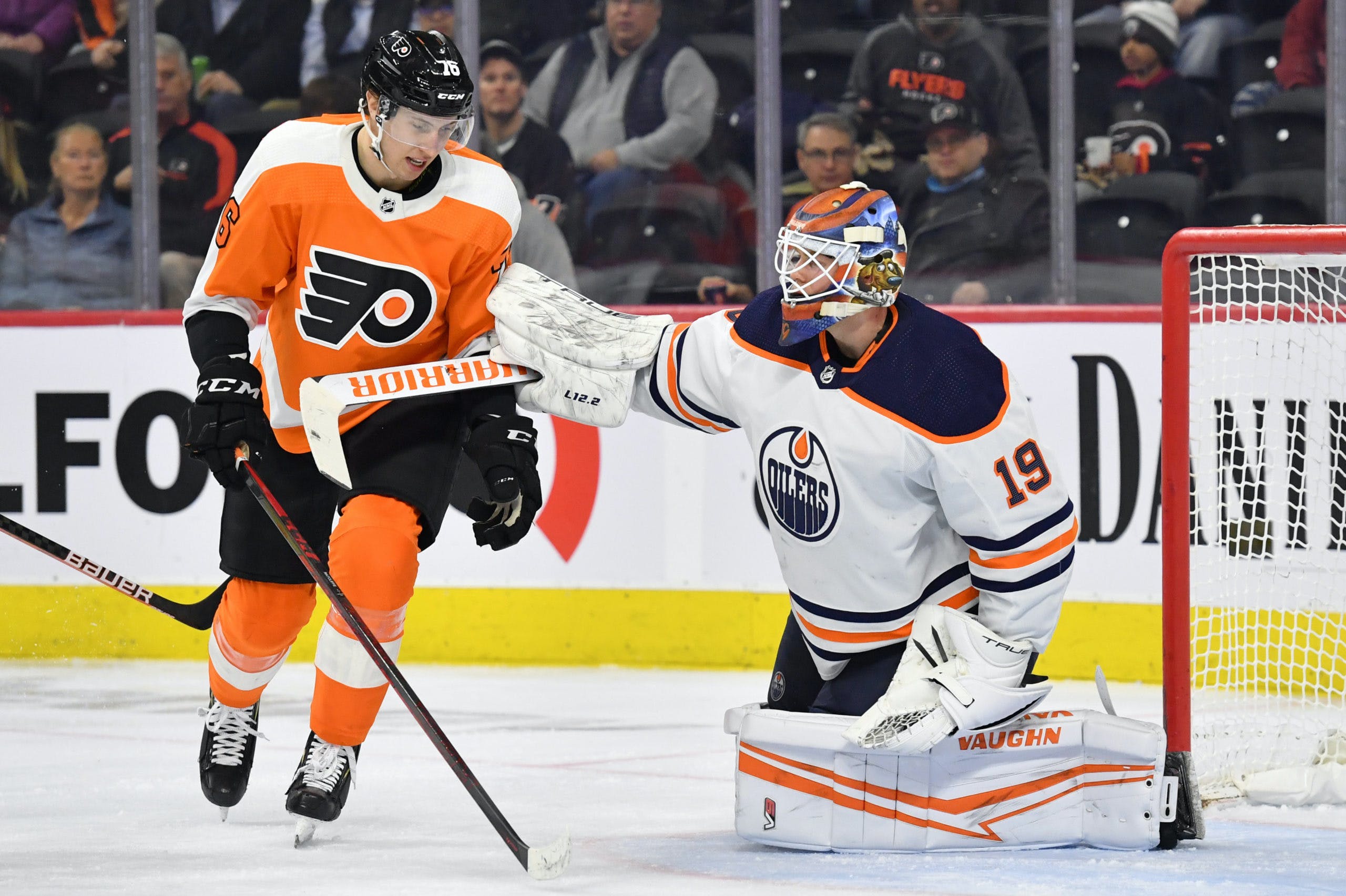 Photo credit: Eric Hartline-USA TODAY Sports
By Zach Laing
11 months ago
Comments
Mikko. Koskinen. Final score: 3-0.
The Edmonton Oilers took what they did against Tampa Bay, Florida and Carolina and rolled the Philadelphia Flyers tonight. A great team effort was capped off by an A+ performance from Koskinen. BaggedMilk has the Wrap Up here.

flyers get lucky. konecny gets clipped by his teammate and the oilers get penalized. pic.twitter.com/8qSkNywTkw

leon draisaitl absolutely rips one bar down and the oilers take a 1-0 lead pic.twitter.com/TeS3IST1cG

a little tic-tac-toe between zach hyman, leon draisaitl and connor mcdavid, the latter of caps the night off with an empty net goal. pic.twitter.com/4ttCRc73d3

On the game: “First of all, I think it’s a big win. The two better games we played on this road trip before tonight we actually lost, so it kinda comes full circle. Solid effort. I thought there was times we were a little sloppy maybe. When we were, Koski was amazing.”
On Koskinen: “We’re confident in him and I’m sure he’s pretty confident in himself. He’s been playing amazing hockey keeping us in games making saves when you need them. That’s really all you can ask for from a goalie. We need him to continue that.”
Advertisement
Ad
Advertisement
Ad
On being drafted in Philadelphia eight years ago: “Other than I lost a little bit of money today which I put on the board (laughs). There’s a lot of great memories. This was the first really big day of my career and kind of where it all started. There’s always great memories coming back here.”
On external noise of the Oilers needing a goaltender, and if people need to realize Koskinen’s a guy the Oilers can depend on: “I think both of them — Schmiddy too. Schmiddy was phenomenal in Carolina. When we play that way the way that we’ve been playing, that tight and tight-checking, teams are going to have a hard time scoring on us. If we continue that, we got all the trust in the world with both of those guys.”
Advertisement
Ad
Advertisement
Ad
On not giving up secondary shots: “It seems like there’s no rebounds coming from (Koskinen). That’s usually where you create chances, when rebounds are happening and you go lateral. He just gobbles it up right now. like I said, he’s been amazing for us.”

On the game: “I think we played really well defensive-wise. We gave them a shot, but it all came outside-wise. We did a good job boxing them out. I think it all started with a big 5-on-3 kill. I’m super happy for the boys they did an unbelievable job.”
On winning seven of his last eight games: “Everything is about winning. You either win or lose the game, two points or zero points. It’s pretty clear I’m a team player, I don’t care about the stats anymore. I’m too old anyways. I’m here to win the game and hopefully something bigger.”
Advertisement
Ad
Advertisement
Ad
On if he’s changed anything about his game: “Not really. It’s tough to say, I think the whole team is playing so well. When the team is playing well, usually the goalies are looking good too. It’s everyone. That’s the biggest thing moving on.”
On if he feels more comfortable in his game now than any other point this year: “Yeah, I’ve been feeling pretty good the whole year. Always when you’re winning games, the confidence is going higher. Right now, we’ve been winning and I try to keep it that way.”
On if he saw any dangerous shots, or if it was routine: “I would say it was routine. They had a couple of good looks, but they mishandled the pucks or something happened in the end. Like I said, our whole five guys did a really great job in front of me.”
Advertisement
Ad
Advertisement
Ad

On the game: “I thought it was a strong hockey game. We scored goals in different fashions. The powerplay came up big at the end of the first period after we had a great 5-on-3 penalty kill. Found a way to score a real May, June type goal at the end of the second period there that bodes well for us as we move forward. I thought we played a really mature third period. I thought we did some things very well tonight. There’s some areas we got to continue to clean up, but there’s a lot to like and a lot to build on.”
On Leon Draisaitl’s game: “Leon came up with some big plays for us tonight, and it was a big factor in our win. I’m happy for him that we got the win in this building.”
Advertisement
Ad
Advertisement
Ad
On Mikko Koskinen’s game: “They had some shots from the outside, and the blue line and all that kind of stuff, but when called upon Mikko came up big. I think he’s inspiring a lot of confidence in the group and made the right save at the right time. I’m happy for him.”
On the changes he’s seen in the team since he took over: “I think it’s only fair for me to talk about since I have been the head coach here over the last three weeks or so. We’ve asked our players to really up their level of work, to really increase our work rate, especially working back to our own end. And I’ve just been so impressed with the level of dedication, the level of work that our players are demonstrating on a night in, night out basis. We have a good record over that time, but even in some of the games we didn’t win, we did a lot of really good things. I think we’re working our way towards creating a playing identity that will last over the tough times. That’s a full credit to the buy-in and work ethic of our players because it has been elite.”
Advertisement
Ad
Advertisement
Ad
On the players’ confidence in Koskinen: “I would say that our players and the coaching staff and the people in our room have confidence in all of our goaltenders, number one. Then the second thing I would say is Mikko’s been playing very well for a long period of time here. It’s not just over the last few weeks. Before the break, he had put up some good numbers. Through no fault of his own, he ended up on covid protocols, but he worked his way back into game shape and the three games I’ve seen him play here he’s been excellent. I do think he inspires confidence in the team and he’s been a big factor in those three wins I’ve seen personally.”
Advertisement
Ad
Advertisement
Ad
On limiting the Flyers’ chances: “I thought they ended up with a lot of shots on net, but in terms of quality of chance, we did a lot of good things. The biggest chances they had either came off faceoff wins, or off our stick either us trying to pass through people or maybe a turnover in the offensive zone. Those are the things I think we can continue to improve at. But when you win a game 3-0 on the road in a tough building I think it’s a total team effort. Our players should be proud everyone contributed to a full sixty minutes.”
On Kailer Yamamoto, his goal: “He’s an important piece of our team. Not having him in Carolina, that hurt us. But we had some good people come in and rise to the occasion when he wasn’t in the lineup. But Yamo gives us energy on the forecheck, he’s a dogged back checker, just relentless on the backcheck. I think he’s underrated physical. We saw a big hit tonight he finished a check on. And I just think he has a high hockey IQ and is willing to pay a price to score. You don’t go where he went to to get that goal unless you’re brave, you’re willing to pay that price. He sure was tonight.”
Advertisement
Ad
Advertisement
Ad
On Draisaitl and McDavid’s game, the little things they do beyond scoring: “I think that’s where everybody goes, is to the points. And they’re special, special players just in terms of what they can do on a night-in, night-out basis. What the coaching staff and their teammates get to see is how they conduct themselves behind the scenes, not in the public view. What I see is two professionals that are dedicated to their sport, they’re driven to win and they’re leading the way here in terms of the details required for us to win hockey games. I’m thankful they’re on our hockey team.”
Zach Laing is the Nation Network’s news director and senior columnist. He can be followed on Twitter at @zjlaing, or reached by email at [email protected]