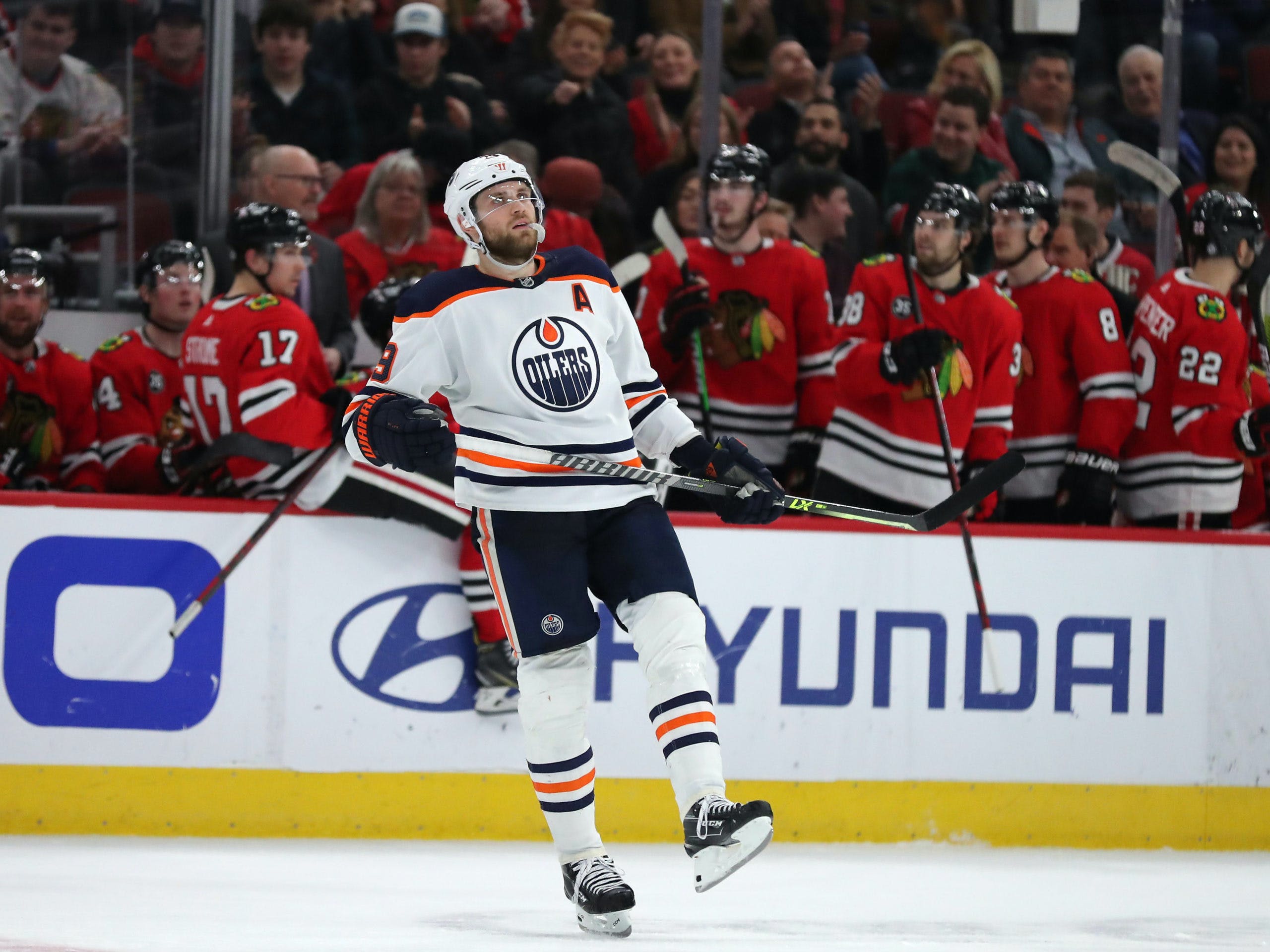 Photo credit: Dennis Wierzbicki-USA TODAY Sports
By Zach Laing
10 months ago
Comments
I mean… I guess we’ll take the point? Final score: 4-3 in OT.
The Oilers got one point, but really didn’t deserve it. I guess we’ll take it? Edmonton now sits tied for second in the Pacific. BaggedMilk has the Wrap Up.

a nice defensive play by darnell nurse helps spring leon draisaitl, who finds evander kane to tie it up at 2 late in the first. pic.twitter.com/yhKuS56ouN

praise be! in the dying minute of the third, leon draisaitl wins a big board battle and evander kane flips a puck that finds the back of thet. 3-3 tie. pic.twitter.com/Qrw81BeCdz

chicago wins it in overtime. pic.twitter.com/viiMMka5UB

On the game: “Chicago played well, we didn’t play well enough. Especially in the first. We stuck with it, found a way to get a point. Found a way to get to extra time, we just want to take home that last point after a long trip.”
On the emotion in the building, how they approach it: “Even keel, just like any other night. It’s probably more emotional for Duncs. None of us have done what he’s done in this building and for this organization but it was obviously a big night for him. Wish we could’ve got that last point for him.”
Advertisement
Ad
Advertisement
Ad
On Mikko Koskinen, his mistake, and wanting to fight back: “Koski’s been unbelievable for us. He’s playing hard. Things happen in the game, but he played his butt off again tonight and held us in it when they could’ve went up one or two. He had a great night tonight again.”
On Oilers’ rhythm: “Our first wasn’t the best. Found a way to get a little momentum in the second and third. We stuck with it, battled back and found a way to get it to overtime.”
On the five-game road trip: “I think it’s funny. The two games we played the best we didn’t get any points out of those games. There’s a lot to build off this road trip. A lot of good hockey was played. With that said, we didn’t get the points and the amount of wins we wanted to. We go home, reset for a day, and go right back at it.”
Advertisement
Ad
Advertisement
Ad
On how they are handling the things that were happening in Canada, and now the war in Ukraine, and if they talked about it: “I think everyone is very aware what’s going on in the world and as a team, you talk about it. Our job is to come out here and play and get points. that’s where our focus is.”

On the game: “When you’re down by a goal late in the game, to find a way to send it to overtime, I think it speaks to our players’ character to push in that fashion. In the end, we found a way to get a point out of a tough game here tonight.”
Advertisement
Ad
Advertisement
Ad
On the Oilers’ rhythm: “I didn’t love our board work today, specifically the plays we made along the wall. I thought that either directly, or indirectly, it led to a lot of chances against and a few goals against early in the game. I don’t love that, but I thought we found a way to stay in the game and grind out one point. We didn’t give up. We found a way to score our powerplay goal, a four-on-four goal, and at the end of the game, a six-on-five goal. Just like after wins, we don’t spend a ton of time celebrating. We’re going to take the point out of this building here in Chicago, we’re going to get on the plane, and we’re going to prepare for our game on Saturday.”
On the emotion in the building: “I thought it was a good crowd tonight. Anytime you come into this building, just the anthem alone gets you fired up as the visiting team. There was a lot of emotion with celebrating Hjalmarsson and celebrating Duncan’s first game back in Chicago. I do think you can draw from that regardless if you’re the home team or the visiting team.”
Advertisement
Ad
Advertisement
Ad
On Koskinen’s gaffe, his game: “He’s one of those goalies that the players in front of him want to play hard for him. They’re not just playing with him, they’re playing hard for him. You reference the third goal there, but he made a lot of numerous saves that allowed us to get a point out of this game. Like I said, we’re not going to overcook it, overthink it. We’re going to try and get as much rest as we can. The schedule is unrelenting, so we’re going to get on that plane, rest up and be ready for Saturday.”
On Evander Kane, his first two-goal game in Edmonton: “I think he had some jump in his step today. not only on the goals he scored, but in his skating. We can’t forget he missed a good portion of our season. He’s just getting up and running. We’re seeing just scratching the surface of what he’ll be able to bring to our team long term, and two goals for him — he’s got to feel good about his game.”
Advertisement
Ad
Advertisement
Ad
On how the Oilers are navigating what’s going on in the world, and keeping the team focused: “We’ve spent a lot of time… since Dave Manson and I both came into the group here three weeks ago, just talking about the things within our control focusing on our process and making sure that we pay attention to what is immediately before us. Once we’ve played that game that day, practiced that day, or travelled that day, then we move on to the next day. That’s what we’re trying to do with our team here.”
On the road trip: “I would compliment the Chicago Blackhawks on how they played the game tonight. I thought they played hard. They have some real dangerous players. Every game has been close. you look at those games, those aren’t easy buildings to come away from with points in. We found a way to have a .500 road trip. Obviously, we thought we could’ve had more, but it is what it is. Like I said, we’re not going to overcook it. We’re going to take the good out of it, rest up and get ready for Saturday.”
Advertisement
Ad
Advertisement
Ad

On the game: “It was great to be able to tie it to force overtime, give ourselves a chance to win. But that’s the way it goes sometimes.”
On the emotion in the building: “I think the only guy that maybe had any sort of pressure on him was Duncs. We as the rest of the team should’ve handled that just fine. I think we got off to a bit of a sloppy start, but found a way to come out of it tied. I think we needed a little more drive in our game and that will pay off for us down the road here.”
On his first two-goal game of the year, how his game is coming along: “The last couple of games I’ve thought I had good legs, but haven’t really gotten a lot of opportunities or clean looks. Tonight, I finally got some pucks towards the net which is a big part of my game and was able to get rewarded.”
Advertisement
Ad
Advertisement
Ad
On the Oilers’ road trip: “I’d say average. you look at the trip at the beginning, we’ve got a gauntlet of a start. To come out of it .500, I guess it could’ve been worse. I think we expected better, but we got to take it, move forward, and not dwell on it.”
On if there’s a lot to build off of on the road trip: “I think we know how we can play. I think we need to continue to add that drive, and that grit to our game and simplify a little bit. When we do that, we have success. i thought we got away from that a little bit tonight, but we’ll have to find it come Saturday.”
Zach Laing is the Nation Network’s news director and senior columnist. He can be followed on Twitter at @zjlaing, or reached by email at [email protected]
Advertisement
Ad
Advertisement
Ad