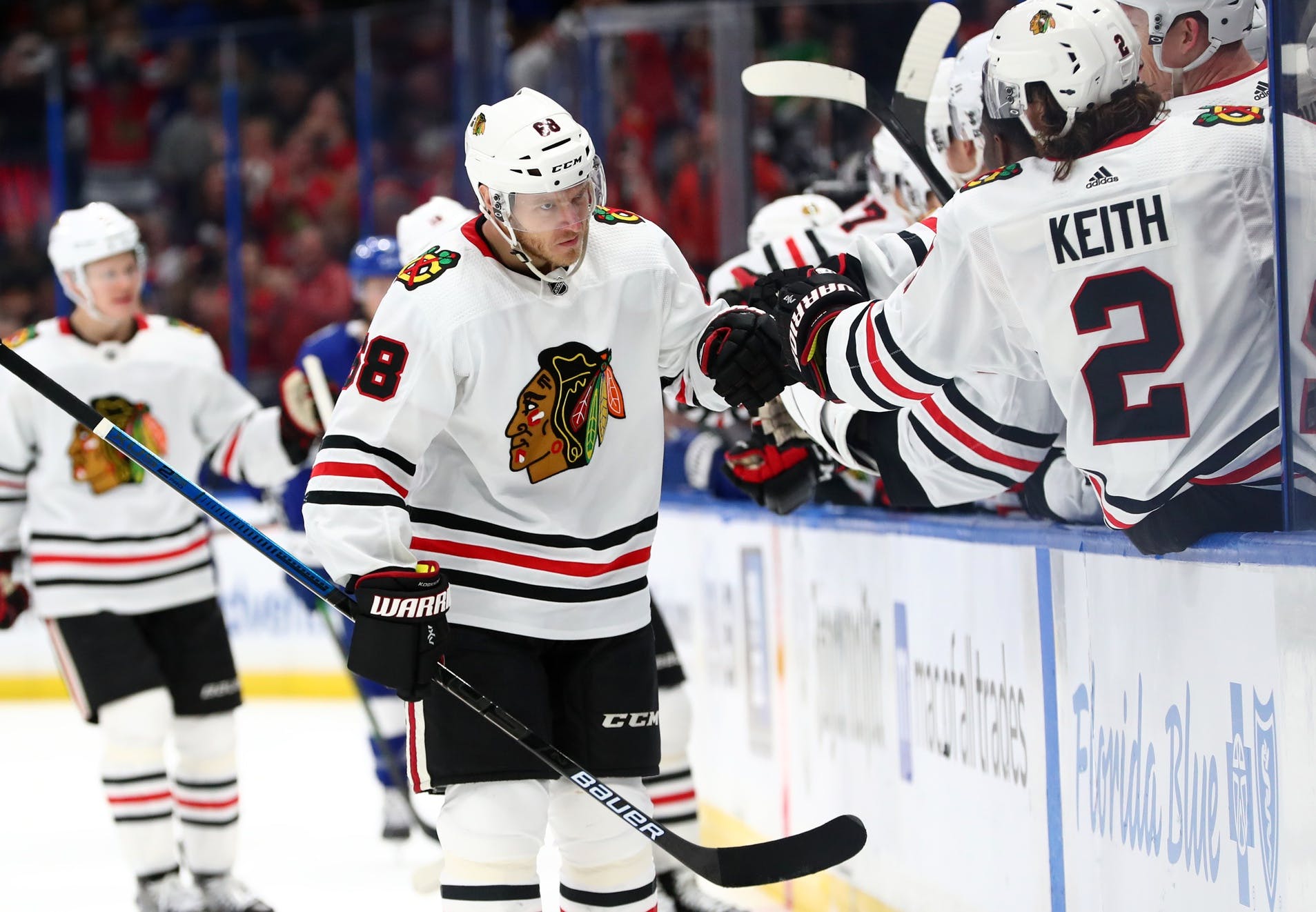 Photo credit: Kim Klement-USA TODAY Sports
By Jason Gregor
2 years ago
Comments
The Edmonton Oilers top-six defence looks set with @Darnell Nurse, @Caleb Jones and @Kris Russell on the left side and @Tyson Barrie, @Ethan Bear and @Adam Larsson on the right side. Then they have @Evan Bouchard, @William Lagesson and Theodor Lennstrom battling for the seventh spot. Lagesson has played eight NHL games, Bouchard seven and Lennstrom zero. They don’t have much NHL experience, so look for Ken Holland to sign a veteran defender before training camp.
Likely this week, because if the player wants to be on the ice for day one of training camp, then need to be in Edmonton this Saturday due to quarantine protocols.
Edmonton needs more NHL depth on their blueline. I think they are seven D-men deep, with Bouchard being close to ready. They need one more solid NHL defender. Injuries are inevitable. Here is a quick look at the first 56-games of the past three seasons, and how many D-men dressed in those games to illustrate the need for depth.
2019/2020:
56 GP: Darnell Nurse, Ethan Bear and Oscar Klefbom.
49 GP: Kris Russell
34 GP: Adam Larsson
31 GP: Matt Benning
29 GP: Caleb Jones
13 GP: Joel Persson
9 GP: Brandon Manning
3 GP: Lagesson
Among their starting six D-men, Benning missed 25 games, Larsson missed 22 and Russell seven. They were seven D-men deep with Jones proving he could play, and play well, in the NHL.
Advertisement
Ad
Advertisement
Ad
2018/2019:
56 GP: Nurse and Larsson
46 GP: Russell and Benning
35 GP: Klefbom
33 GP: Kevin Gravel
17 GP: Jones and Jason Garrison
12 GP: Brandon Manning
7 GP: Alex Petrovic and Evan Bouchard
5 GP: Chris Wideman
They used 12 D-men in their first 56 games. Only six D-men played 33 of the 56 games.
2017/2018:
56 GP: Nurse and Russell
52 GP: Klefbom and Benning
40 GP: Larsson
24 GP: Johann Auvitu
21 GP: Eric Gryba
19 GP: Brandon Davidson
17: Andrej Sekera
Sekera missed the first 41 games, which was expected as he recovered from ACL surgery, but their fifth D-man still missed 16 games and the #6 spot was a rotation among three players.
In the previous three seasons the fewest D-men they used in the first 56 games of a season was nine. And that was in a normal years, with a three-week training camp and preseason games and without the risk of COVID.
Advertisement
Ad
Advertisement
Ad
It makes sense for Holland to add a veteran D-man, and he is in conversations to sign one. Ben Hutton and Slater Koekkoek are two who make sense and I know the Oilers have had conversations with both. Madison Bowey doesn’t make sense to me as he is a right shot. They have four right shot defenders, and Jones and Russell can play the right side if needed. Edmonton’s needs another left shot veteran.
Basic stats:
Slater Koekkoek: 10th pick in 2012. He’s played 149 NHL games, and 42 games last season was the most he’s played in one NHL season. He has produced 7-22-29 points
Ben Hutton: 147th pick in 2012. He’s played 341 NHL games, averaging between 61-75 GP over the past five seasons. He has 15-71-86 points.
Hutton has more NHL experience. Now let’s look at some other numbers.
Advertisement
Ad
Advertisement
Ad

He has played 1934 minutes at 5×5 in his career. His time has been split quite evenly, at least in minutes played between Chicago and Tampa. In four and a half seasons in TB he played 989 minutes and in one and half seasons with Chicago he played 948 minutes. Tampa was a much deeper team and harder lineup to crack.
Here are his stats between the two.
In Tampa he had a 48.3CF%, 50.1SF%, 49.6SCF% and a 50GF%.
In Chicago he posted a 52.4CF%, 49.8SF%, 51.1SCF% and a 53.4GF%.
He had better possession numbers in Chicago, despite being on an overall weaker team. That is a positive.
Advertisement
Ad
Advertisement
Ad
This past season with Chicago he played 30.5% against Elite, 30.9% against middle and 38.6% against grind lines courtesy of PuckIQ.com
Koekkoek has played 19 playoffs games, while Hutton hasn’t been on a playoff team.
Koekkoek had an excellent GF% last year in the playoffs for the Blackhawks, at 9-5 (64.3%), but the Hawks got crushed at 5×5 on possession in their series against the Oilers and then Vegas.
In game one, at 5×5, against the Oilers the Hawks outscored them 3-0, had a 23-18 advantage in scoring chances, 28-19 in shots and 45-37 in Corsi. But in their remaining eight games they were dominated at possession. Edmonton led in scoring chances, 74-52, shots on net 80-55 and Corsi attempts at 140-106. But the goals were even at nine.
Vegas dominated the Hawks for five games and in the playoffs Chicago finished with a 42.3CF%, 41.06SF%, 40SCF% and 47.6GF%.
Advertisement
Ad
Advertisement
Ad
And Koekkoek’s stats reflected that as he finished with a 41.5CF%, 41.5SF%, 38.6SCF%, but he had a 64.2GF%.
In the playoffs winning is all that matters, and because Koekkoek was involved in some key goals I believe he left a good impression for some within the Oilers.

Koekkoek’s regular season numbers improved this season in Chicago, so too did Hutton’s with Los Angeles.
Hutton is 27, while Koekkoek is 26. Both of them are 6’2″ and around 200 pounds. Hutton has more experience.
Ken Holland has reached out to both players. He would like to add a veteran defender, either via free agency or waivers. The risk of waiting for waivers, is that other teams might claim the player you want, and they might be on a larger contract.
I know multiple teams have reached out to both Koekkoek and Hutton. San Jose needs a sixth NHL defenceman, while Vancouver, Colorado, Chicago, Detroit, Los Angeles, the New York Islanders, and Boston, if they don’t re-sign Zdeno Chara, could be in the market for a veteran depth defender. Colorado might just see how Bowen Byram (who I’m very high on) looks after the World Juniors, but there are other teams looking at Hutton and Koekkoek.
Advertisement
Ad
Advertisement
Ad
Due to COVID, a flat cap and being this late in the process I don’t see either starting a bidding war, so it will come down to which team they believe gives them the best chance to play.
Hutton or Koekkoek, who would you want the Oilers to sign?

Thanks to Rhett for his great bid on the Legacy Heating furnace package.
Day 17, Package #1: A Career Transition Package courtesy of Pathfind
Expert Career Planning
Two (2) hours of one-on-one coaching with an assigned certified Career Coach (either in office or remotely) tailored to the needs of the individual participant based on his/her completion of a Transition Needs Assessment. These meetings may include resume review, interview preparation, social media presence, LinkedIn profile creation etc.
Powerful and Professional Resume
Your Career Coach will help you identify your marketplace skills and your personal brand advantage. Within a few days, you will jointly develop a high-impact resume. After a stringent quality review, you will have a resume that is a commanding personal advertisement that attracts employers’ attention.
Advertisement
Ad
Advertisement
Ad
High Performance Leadership Coaching
Five (5) hours of one-on-one leadership coaching with a certified Executive Coach. Through dedicated time with your Executive Coach you will take important steps towards increasing your effectiveness and impact, achieving rapid success with improved confidence, and creating sustainable personal growth developments.
After this specialized three-step career transition program you will be highly marketable, more effective for your new team, and well-prepared for that next incredible career opportunity!
Package #2: A Shakti Necklace and Book signed by Glori Meldrum
It is a 14K rose gold and pave diamonds necklace.
THE CRESCENT MOON is a symbol for growth, manifestation and transformation, wear the crescent moon to root you into a change in a way of thinking and/or action. The Crescent moon represents our intuition. Trust your intuition and wear the crescent moon to support you on new beginnings and making your dreams a reality. Go inside. Heal. Let go. Make way for all the good things coming.
Advertisement
Ad
Advertisement
Ad
And a signed copy of Meldrum’s book Warrior.
Package #3: A Romantic Staycation
You can bid by listening to TSN 1260 and calling 780.444.1260 or text 101260 between 2-6 p.m. today. We are supporting Little Warriors and the MS Society.