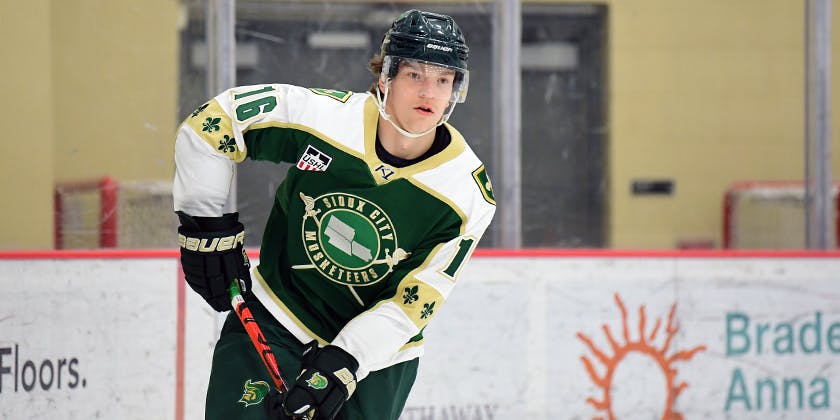 By Zach Laing
4 months ago
Comments
The Edmonton Oilers have drafted forward Joel Määttä 222nd overall in the 2022 NHL Entry Draft.
The 6’2, 201 lb. center is currently playing NCAA hockey for the University of Vermont. This past season, he appeared in 32 games scoring three goals and six points.
Määttä spent the two years prior with the USHL’s Sioux City Musketeers, where in 95 games he scored 20 goals and 45 points. He appeared in three games for Finland at the 2022 World Juniors, where he scored a goal and two assists in two games.
The Oilers would know a lot about Määttä, given Oilers head coach Jay Woodcroft’s brother, Todd, is the head coach at the University. The Oilers drafted another University of Vermont product last year in German defenceman Luca Münzenberger.

Määttä played in 32 games for the Catamounts registering three goals and three assists for six points … He scored his first career goal on Feb. 19 at Merrimack … His first career multi-point game came on Mar. 4 at UConn, with a goal and an assist … Five of his six points came in the final 10 games of the season … Määttä represented Finland at the abbreviated 2022 IIHF World Junior Championships in Alberta … In two games Määttä had a goal and two assists for Finland including the game-winner on December 26 against Germany and his UVM teammate Luca Münzenberger … He averaged 15:18 of ice-time for the 2-0-0 Finns … Määttä was third in the tournament in faceoff percentage winning 74.2 percent of his draws … He won 23 of the 31 faceoffs he took. – University of Vermont
It’s Määttä’s defensive ability that generates value. He’s so hard on the puck, so unrelenting on defensive zone retrievals, and unafraid to engage physically when the moment calls for it. Hell, he put a Black Hawks player on his ass mere seconds after losing the opening faceoff. He reverse hit another Black Hawks player in the second. He’s sturdy. Perhaps a bit too sturdy. – EliteProspects
It’s Määttä’s punishing net-front presence and two-way reliability down the middle that creates value in excess of what his pedestrian stat line suggests. Even so, the boxcars start to look better when one considers the environment that the Musketeers offered as the Eastern Conference’s worst team — a setting made worse at the deadline as they dealt most of their complementary talent to kickstart their rebuild. –
Joey Padmanabhan, EP Rinkside, 2020

NATION VACATION presented by PointsBet Canada. Come hang out with us on the 1st ever Nation Summer Vacation to Toronto! For only $1399 + tax, you’ll get everything included in the graphic and memories that will last a lifetime. Get your tickets here.
Advertisement
Ad
Advertisement
Ad