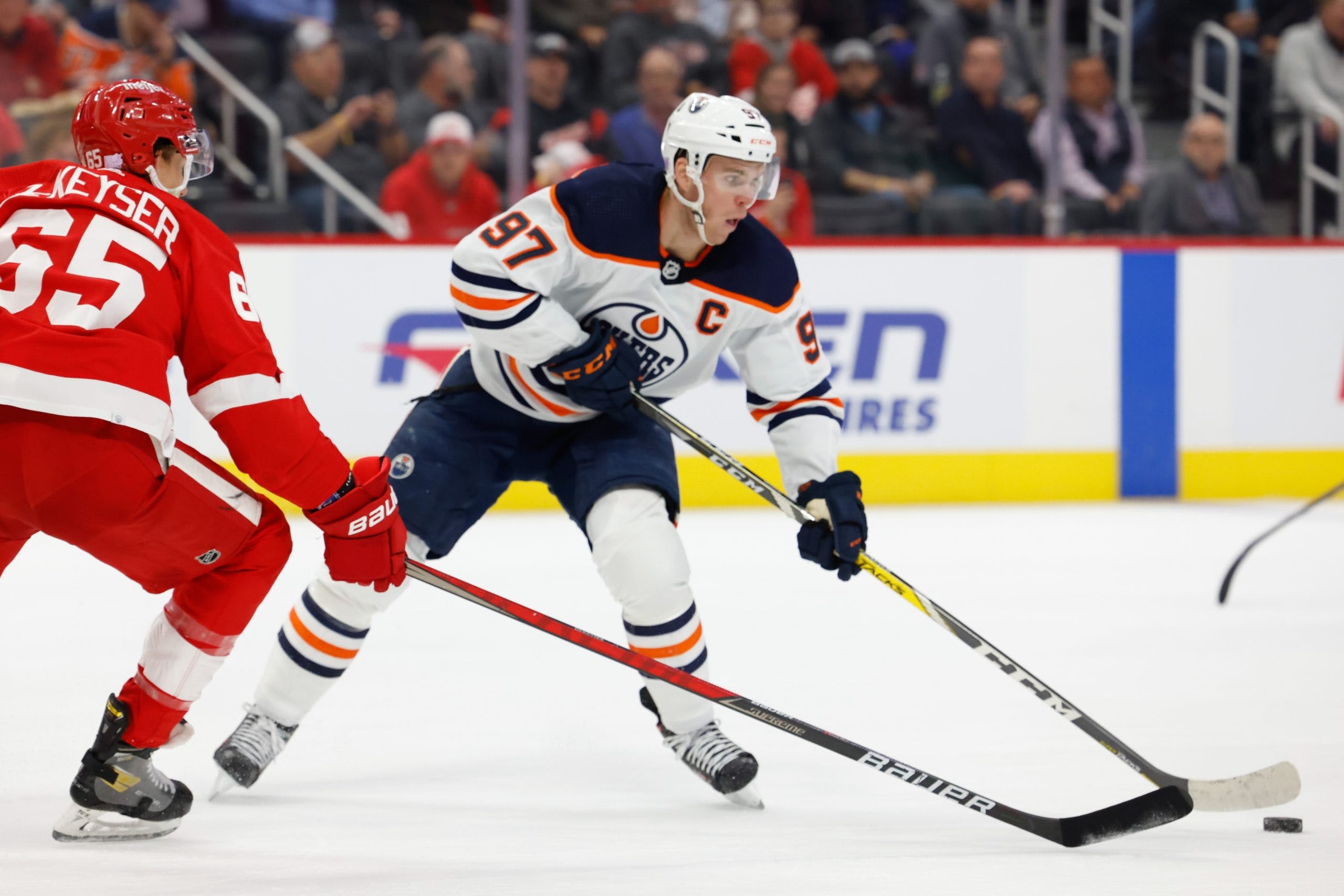 Photo credit: © Rick Osentoski-USA TODAY Sports
By Jason Gregor
10 months ago
Comments
The Edmonton Oilers needed to win two of their three games last week against playoff-bound teams in Calgary, Washington and Tampa Bay to give them some positive vibes, and they did. They played well in all three games, but saved their best for last in a convincing 4-1 win over the two-time defending Stanley Cup champion Lightning.
This week the Oilers face three teams bound for the draft lottery, and two wins are a must. I’d argue they should sweep their three games before next Monday’s trade deadline.

— The Red Wings are struggling. They have gotten worse as the season’s gone on.
They are 24-28-7 in 59 games.
They started the season 14-13-3 in their first 30 games.
And they are 10-15-4 in their previous 29 games.
In their most recent 10-game stretch they are a league-worst 2-7-1 and have been outscored 53-29. They managed to defeat one of league’s top teams, Carolina, and they defeated the Rangers and lost to Minnesota in a shootout. So despite their recent woes, they can still surprise you and the Oilers need to attack them early and not allow them to hang around and gain confidence.
Advertisement
Ad
Advertisement
Ad
— Edmonton and Seattle have surrendered the first goal a league-high 41 times. Detroit isn’t much better as they’ve been scored on first 34 times. The difference is the Oilers have managed to come back and win 14 games when trailing first, while Detroit is 8-21-5.
— The Oilers have scored first in consecutive games only four times this season. They scored first in game one and two v. Vancouver and Calgary, then again in games seven, eight and nine v. Vancouver, Seattle and Nashville. They did it again in game 20 and 21 v. Vegas and Pittsburgh on November 27th and December 1st and finally in games 45 and 46 on February 11th and 14th v. the Islanders and Sharks. They could do it for a fifth time tonight.
— Edmonton is still undefeated when scoring first at 18-0, and they are also the only undefeated team when leading after the first period. Edmonton is 17-0 when leading after 20 minutes, they are 4-18-2 when trailing and 11-5-2 when tied after 20 minutes. Meanwhile, Detroit is 11-2-3 when leading after 20, 4-19-3 when trailing and 9-7-1 when tied.
Advertisement
Ad
Advertisement
Ad
— The Wings sit 31st in first period goals with only 39. They’ve been outscored 62-39 in the first frame. Edmonton sits eighth in first period goals, but they’ve allowed the fifth most at 64. Their first period struggles have yet to improve under Jay Woodcroft as they’ve 17-13 in the first period.
— Marc Staal played his 1,000th NHL game on Saturday. He joins brothers Jordan (1,071) and Eric (1,293) as the first trio to play 1,000 games. Can you name the five pairs of brothers who each played 1,000 games? (Answer at bottom of article.)
— The Red Wings’ overall play mirrors their record. They aren’t that good. They are 31st in goals/against per game, 23rd in goals for/game, 27th on the PP (17.3%) and 31st on the PK (72.8%). I’d expect a coaching change in the off-season.
Advertisement
Ad
Advertisement
Ad
Detroit ranks in the bottom-10 in all 13 defensive categories. Edmonton should be able to generate some quality chances tonight.
— That being said, the Oilers lost 4-2 in Detroit on November 9th. Edmonton was 9-1 when they travelled to Detroit, but the Red Wings led 3-0 at the 34-minute mark. Edmonton made it 3-2 early in the third period, but couldn’t get the equalizer. I do not expect Edmonton to take Detroit lightly tonight.
— While the Wings aren’t that good, they do have two of the best rookies in the NHL in Moritz Seider and Lucas Raymond. Seider has been unreal. He is playing 23:02/game. He has 41 points in 59 games, which puts him 11th in scoring by defencemen, and he’s outscored teams 46-44 while on the ice at 5×5. The Red Wings have been outscored 99-70 when he’s off the ice. Seider should be the runaway Calder trophy winner. Seider, along with Cale Makar, Adam Fox and Aaron Ekblad, should have some great battles for the first and second team All-Star selection for right defencemen in the coming years. Seider isn’t at their level this season, but he is close.
Advertisement
Ad
Advertisement
Ad
— McDavid has 11 points in 10 games v. Detroit. That 1.1 points/game is the fifth lowest of his career against any NHL opponent. He has a 0.88 v. Carolina, 0.90 v. Buffalo, 1.06 v. Minnesota and 1.07 v. Chicago. Detroit is one of only five teams McDavid has yet to register a three-point game against. Buffalo, St. Louis, Chicago and Seattle are the others. McDavid has had five two-point games against Chicago, four v. St.Louis and Buffalo and three v. Detroit. He has two in three career games v. Seattle. Detroit has limited his major outbursts better than any team thus far.
— @Duncan Keith will play his 75th career game against the Red Wings. That is his third most against any opponent behind St. Louis (80) and Nashville (91). Keith’s eight goals against Detroit are the second most behind his 11 v. the Blues. Keith needs one point for 640 in his career which would move him into 33rd place all-time among defencemen. If he scores a point tonight it would be his 40th career point v. the Red Wings.
Advertisement
Ad
Advertisement
Ad
— The three Staal brothers played 1,000 games to set a new NHL record. Jordan and Eric were tied with five other pairs of brothers prior to Marc helping them set a new standard.
Henrik (1,330 GP) and Daniel ((1,306) Sedin.
Scott (1,263) and Rob (1,153) Niedermayer.
Kevin (1,157) and Derian (1,057) Hatcher.
Saku (1,124) and Mikko (1,035) Koivu.
Brent (1,111) and Ron (1,093) Sutter.