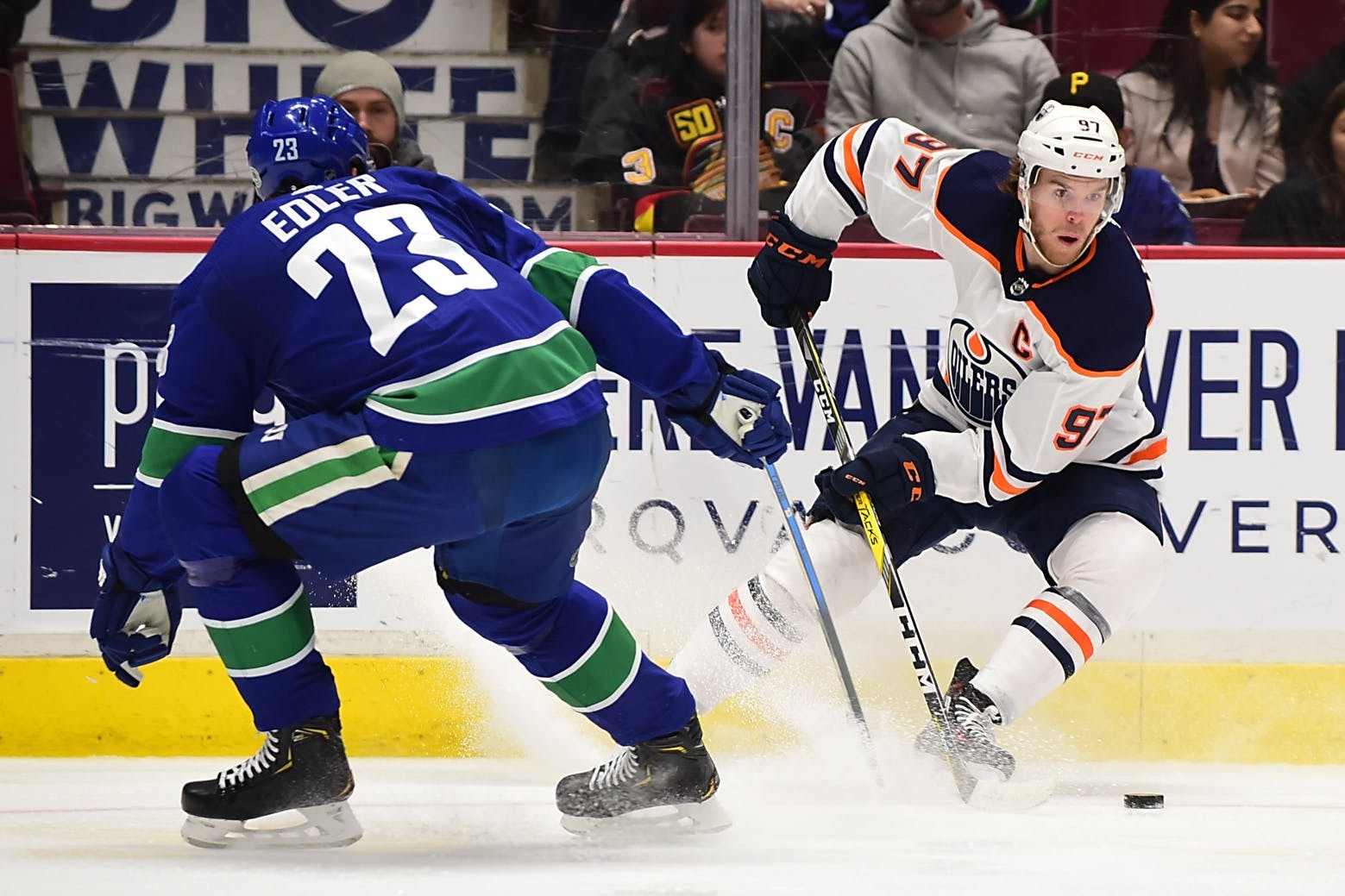 Photo credit: Anne-Marie Sorvin-USA TODAY Sports
By Jason Gregor
2 years ago
Comments
Like a young child on Christmas, I woke up early this morning excited about the day. Exactly 44 weeks since the last NHL regular-season game was played, the NHL returns tonight with five games. This season will be very different. No fans in the stands, an abbreviated 56-game season, four new divisions and teams only playing games against divisional foes, but I am freaking pumped to get it going.
For one season there will be no arguing who is the best team in Canada. It will be the one who makes the playoffs and then wins two rounds. Bring it on.
The last NHL regular season games were played Wednesday, March 11th, 2020, and that night the Oilers lost to the Winnipeg Jets. Vancouver defeated the New York Islanders in a shootout the night before. It has been 44 weeks since the NHL played a regular season game, but the wait is over.
The 2021 season begins tonight and I’m expecting a lot of fireworks. In the North Division we will see 108 two-game series, 26 three-game series and five four-gamers, explained more technically below.
Those four-game series should be interesting to watch. If one team is banged up significantly at the time, we could see a huge swing, positively and negatively, for two teams during that week. Here are the dates of the four-gamers.
Advertisement
Ad
Advertisement
Ad
February 11th to 17th — Calgary/Vancouver
March 28th to April 3rd — Montreal/Ottawa
April 22nd to 28th — Vancouver/Ottawa
February 1st-9th. Winnipeg/Calgary. Winnipeg plays four in a row against Calgary, but the Flames actually play three in four nights against Winnipeg, then play Edmonton on Feb 6th, before facing the Jets again on the 9th. So it is a four-game series for Winnipeg, but not Calgary.
February 25th to March 4th — Calgary/Ottawa. Calgary plays four in a row against Ottawa on the 25th, 27th, 1st and 4th, but Ottawa has a game against Montreal squeezed in on the 2nd. So it is four consecutive games against same team for Calgary, but not Ottawa.
Like I said, this season will be unique.
The Oilers host Ottawa and Toronto three games in a row and are in Montreal for three. All of these three-game sets come in a span of 15 days between February 27th and March 26th.
Advertisement
Ad
Advertisement
Ad
A good start is imperative in any season, but I think this year more than most you need a solid start so you aren’t playing catchup in February. With every game being against a divisional foe, I believe it will be more difficult to gain ground later in the season. Because every game is a divisional game, it means those three-point games (games decided in overtime or a shootout) directly impact divisional rivals. Last season, if a divisional opponent was playing a team in the other conference, then only two or one of the points would impact you in the standings.
This season, it means all three points stay in the division. The Oilers believe they are a playoff team, and they need to show it from the opening puck drop tonight.
Advertisement
Ad
Advertisement
Ad

RNH-McDavid-Kassian
Kahun-Draisaitl-Yamamoto
Archibald-Turris-Puljujarvi
Ennis-Khaira-Chiasson
Nurse-Bear
Jones-Larsson
Koekkoek-Barrie
Koskinen
Last year Draisaitl was playing left wing with Nugent-Hopkins on opening night while Jesse Puljujarvi was playing in Finland and some felt he’d never play for the Oilers again. Many fans, and some media types, didn’t want him back. But I sense they have changed their tune as the big Finn has returned more mature and much more NHL ready than when the Oilers erroneously rushed him to the league in 2016/2017. He is stronger, quicker and able to move his hulking frame around the ice more efficiently. It is amazing what allowing a player to develop properly will do, but I digress. He’s also improved his English and feels much more comfortable around his teammates. I expect a solid season from him.
Advertisement
Ad
Advertisement
Ad
In a bit of a surprise, Slater Koekkoek beat out Kris Russell for a spot in the opening night lineup. Koekkoek gives the Oilers more depth on the blueline, but he will need to play well to remain in the lineup as the Oilers are currently carrying nine defencemen. I expect that will change when they sign Devin Shore later this week and send Evan Bouchard or William Lagesson to the taxi-squad. Bouchard was on the opening night roster to lower his cap hit. By being on the opening day roster, his cap hit for the season is now $863K. If he started on the Taxi-squad and was recalled, then his cap hit would be the $863K plus his $500K performance bonuses. He costs more as a cap hit by not being on opening day roster. Odd quirk in cap management.
Mikko Koskinen makes the first season-opening start of his career. If he plays well tonight, will Tippett stick with him against the same team tomorrow with no travel, or go with Mike Smith? Then  Smith can start against Montreal on Saturday. It is unlikely he’ll go back-to-back, but if Koskinen is really good tonight I’d consider it. He could get in the heads of the Canucks players if he has a strong game.
Advertisement
Ad
Advertisement
Ad

Virtanen-Pettersson-Boeser
Pearson-Horvat-Hoglander
Roussel-Gaudette-MacEwan
Motte-Beagle-Sutter
Edler-Schmidt
Hughes-Hamonic
Juolevi-Myers
Holtby
I’m not sure if Holtby will start. Canucks head coach Travis Green wouldn’t commit to who is starter was, and I wasn’t allowed in the building to watch practice and see which goalie left the ice first, which is usually indicates who is starting. The Oilers were taking precautionary measures as two media members tested positive, so everyone got tested this morning. And when you get a negative result then you will be allowed in. The results are expected before game time.
I don’t’ believe delaying the announcement of who is the starting goalie at the morning skate matters as much as some coaches do. The Oilers game plan isn’t going to suddenly change drastically because Holtby or Thatcher Demko is in net.
Travis Hamonic will replace Chris Tanev beside Quinn Hughes. It makes sense, both are similar players, but Hamonic has only had two practices with the Canucks. Will he be rusty? And how much time will he and Hughes play against McDavid? If Tippett can get that matchup it will benefit the Oilers.
Advertisement
Ad
Advertisement
Ad

J.T. Miller and Jordie Benn are under COVID-19 precautionary protocol measures and will not be with the team to start the season and could also be out of the lineup for up to two weeks, great! Zack MacEwen will undoubtedly get the nod to play today whereas the defence will probably remain unchanged.
Höglander will get his first taste of NHL action this evening and all eyes will most likely be on him in his debut. Forget about the obvious rockstars in Elias Pettersson, Quinn Hughes, and Tyler Motte; Höglander is the new toy we all can’t wait to see.
Regardless of who gets the start in net, the other guy will start tomorrow. Thatcher Demko earned the right to get the game one nod after his otherwordly performance in the playoffs, a feat so dramatic that the Golden Knights couldn’t shake it and ultimately succumbed to the Dallas Stars in the Western Conference Final.