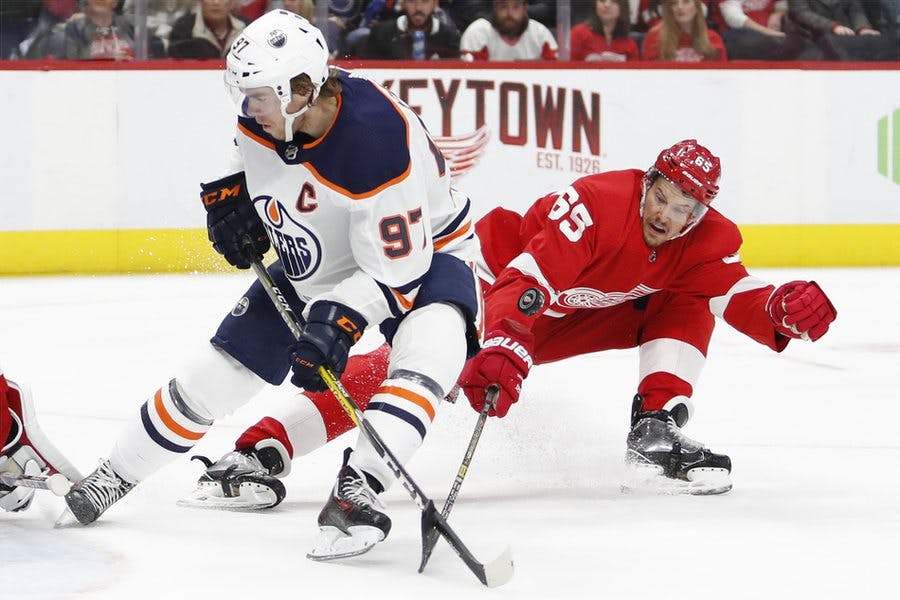 Photo credit: Raj Mehta-USA TODAY Sports
By Jason Gregor
3 years ago
Comments
Dave Tippett has been fairly consistent with his line combinations this season. @Leon Draisaitl had played 85% of his 5×5 minutes with @Connor McDavid and @Zack Kassian. @Ryan Nugent-Hopkins has played with @James Neal for 80% of his 5×5 time. @Alex Chiasson was their regular winger, and when he missed time with injury it was @Tomas Jurco. @Riley Sheahan has played 90% of his 5×5 time with @Jujhar Khaira. Patrick Russell and Josh Archibald have rotated on the right wing.
The fourth line has been a mix bag of @Markus Granlund, @Joakim Nygard, @Gaetan Haas, @Sam Gagner, Tomas Jurco and Russell or Archibald, but we haven’t seen much change until tonight.
Dave Tippett has changed up his second-fourth lines. Wisely, he is keeping the one trio that is producing — Draisaitl-McDavid-Kassian — together, but he’s switching up the other three.
Neal-Haas-Chiasson
Khaira-RNH-Gagner
Jurco-Sheahan-P.Russell
These nine forwards have a total of three goals (5×5) this season — all from James Neal.
Tippett had no choice but to try something new. You won’t win forever with just one line scoring, so why not try some new combos?
He can always switch Haas and RNH mid-game if things aren’t going well, but I suspect he will give these lines some time to see if they can generate some goals.
Advertisement
Ad
Advertisement
Ad
It can’t be any worse than what we saw during the first 12 games. The bottom six produced zero goals. The lack of production forced Tippett’s hand, and who knows, maybe it works out.
Jujhar Khaira has produced virtually identical points at 5×5 the past two seasons. The main difference was he scored significantly more goals in 2018.
In 740 5×5 minutes in 2017/2018, he produced 9-8-17.
Last season in 650 minutes he produced 2-13-15.
His point/60 was an identical 1.38 each season.
He hasn’t played with any player or linemate for an extended period over the past two seasons. In 2018 he played the most with Ryan Strome (263 minutes), followed by Kassian (185), Draisaitl (185), Iiro Pakarinen (147), @Jesse Puljujarvi (136) and @Drake Caggiula (130). Then it dropped to 83 minutes with @Mark Letestu. He only played 27 minutes with Nugent-Hopkins.
Advertisement
Ad
Advertisement
Ad
He had six goals playing with Strome, and four alongside Draisaitl, with a few of those coming when played with both of them. His best P/60 came, not surprisingly, with Draisaitl at 2.49, while he had 2.16 with Letestu and 2.05 with Strome.
Last season his most common linemates were Kassian (222), Nugent-Hopkins (177), Kyle Brodziak (173), Jesse Puljujarvi (156) and Alex Chiasson (64). He played 20+ minutes with 14 different forwards. Again, his best P/60 was with Draisaitl at 2.8, followed by 1.85 with Chiasson and 1.69 with RNH. He did have a 3.04 with Sam Gagner in only 39 minutes.
I’m not expecting Khaira to suddenly start producing, but he, like all the bottom six forwards, is below his usual production. Tippett is hoping one of the new trios can chip in a goal tonight. If two of the lines score, he might do a cartwheel on the bench.
Advertisement
Ad
Advertisement
Ad
I’m sure some will wonder why RNH is slotted with Khaira and Gagner, but at this point I understand why Tippett made the changes. I will be curious to see if Detroit head coach, Jeff Blashill, tries to get certain matchups tonight.
Looking at their last game against the St.Louis Blues, Blashill put Darren Helm with Dylan Larkin and Tyler Bertuzzi, and he played them against the Ryan O’Reilly line a lot. I suspect we will see him put that line out against McDavid’s line tonight.
The question will be: Does he put his second line of Andreas Athanasiou-Valtteri Filppula-Anthony Mantha against Nugent-Hopkins’ line or against the Haas line? It will be interesting to see which matchup he will want for his second line.

"It just shows how good they (McDavid and Draisaitl) are. They are so good that they can win games for you. Your depth has to help eventually, no doubt, but having them allows Holland to not rush and make a desperate move." Craig Button. #NHL

Draisaitl-McDavid-Kassian
Neal-Haas-Chiasson
Khaira-RNH-Gagner
Jurco-Sheahan-P.Russell
Nurse-Bear
Klefbom-Russell
Manning-Benning
Koskinen
I like going with Koskinen. He has played very well in his five starts and this is a game the Oilers should win. I’d argue they need this win, before playing in Columbus tomorrow and Pittsburgh on Saturday.
Advertisement
Ad
Advertisement
Ad
I thought we might see @William Lagesson tonight, but the coaching staff wants veterans so Manning stays in.

Bertuzzi-Larkin-Helm
Athanasiou-Filppula-Mantha
Hirose-Nielson-Erne
Ehn-De la Rose-Smith
Hronek-Nemeth
Hicketts-Green
Daley-Bowey
Howard
The Wings don’t have a shut down pair. Filip Hronek is a good young D-man, but asking him to face top players every night is asking a lot. Tonight is only his 59th NHL game, but Hronek has played very well early in his career. He is logging over 22:44/game and with Danny Dekeyser out with an injury, Hronek will be paired with Patrik Nemeth. Nemeth is more of a #4 or likely a third pairing guy on a good team. McDavid and Draisaitl should be able to generate a lot of quality chances against them tonight.
They recalled Joe Hicketts. He will play, and Dennis Cholowski is coming out.
Advertisement
Ad
Advertisement
Ad
@Jimmy Howard starts in goal.
He and Bernier have rotated starts all season. Neither goalie has yet to start two games in a row.

Photoshop: Tom Kostiuk
GAME DAY PREDICTION: Oilers sweep the season series and skate away with a 4-2 victory.
OBVIOUS GAME DAY PREDICTION: Baggedmilk is unable to tweet as he is torn trying to figure out the line combinations. He loves Nuge, but also Gagner and Khaira. He wants to say why is RNH on the third line, but is intrigued with the new line combinations. He types out a tweet, but constantly erases it as his internal struggle has him flopping between happiness and frustration. Also, McDavid and Draisaitl continue to produce as both pick up two points.
NOT-SO-OBVIOUS GAME DAY PREDICTION: The new combos work and the “goalless eight at 5×5” is no more. Sam Gagner scores his first goal of the season.
Advertisement
Ad
Advertisement
Ad