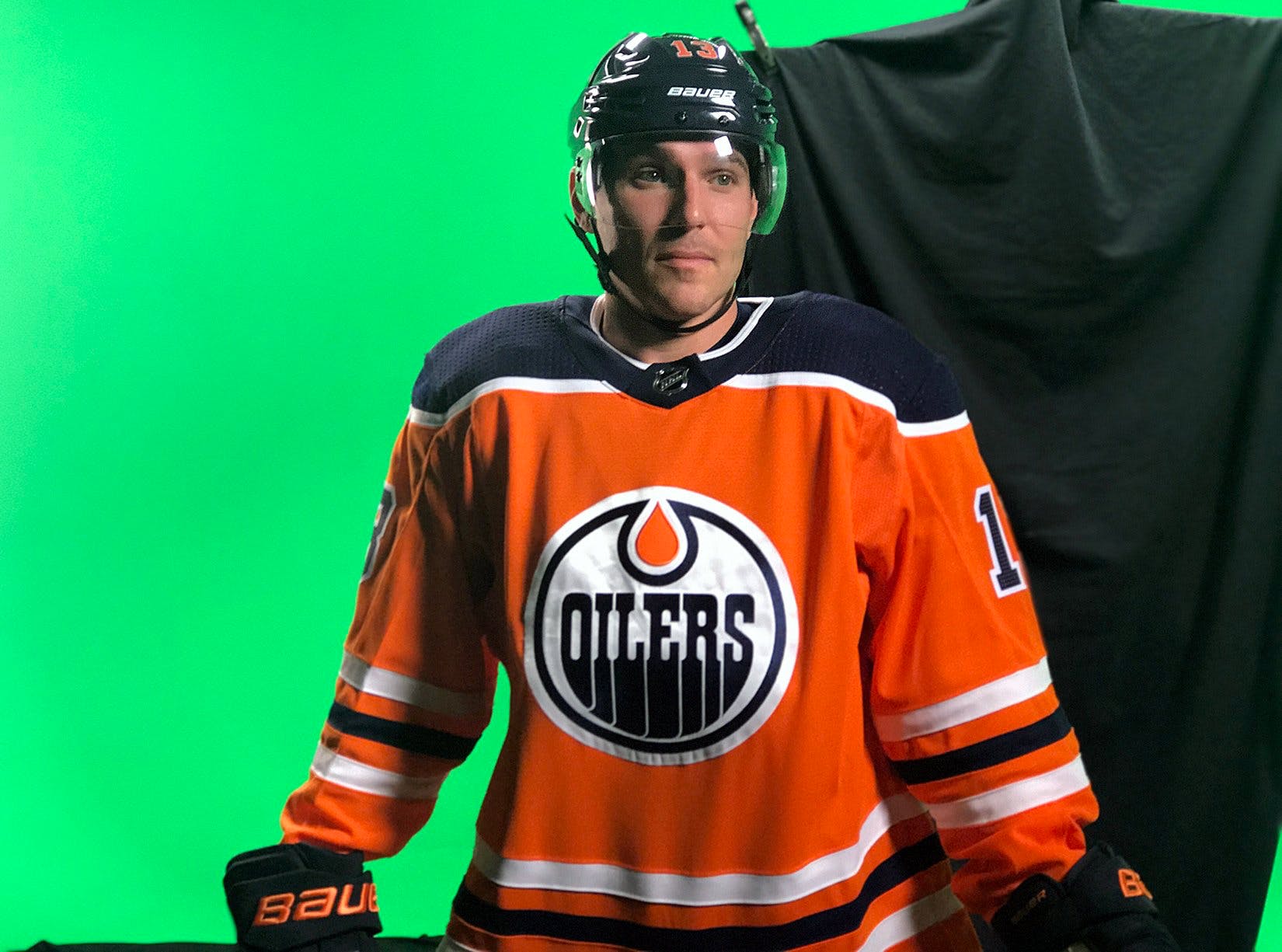 Photo credit: twitter.com/edmontonoilers
By Jason Gregor
5 years ago
Comments
Mike Cammalleri was drafted 49th overall by the Los Angeles Kings in 2001. He played his first NHL game in Ottawa against the Senators on November 8th, 2002. He’d started the season in the AHL, but after scoring 20 points in only 13 games, the Kings recalled him.
His fifth NHL game was in Edmonton on November 16th, 2002, and Cammalleri scored his first NHL goal. “Ziggy Palffy passed it to me on a two-on-one. It was a backdoor, back-against-the-grain five-hole shot on Tommy Salo. You don’t forget your first goal, I don’t think you forget any of them. They’re nice,” smiled Cammalleri this morning recounting his first NHL tally.
Fifteen years late to the day, Cammalleri will make his Oilers debut on a line with Ryan Strome and Iiro Pakarinen
A lot has changed for Cammalleri since he buried his first goal in Edmonton. He has played 850 more games since his first goal, and now has 290 career goals. After six seasons with the Kings he played in Calgary, Montreal, Calgary, New Jersey and back to LA this season. He is also married with children.
Advertisement
Ad
Advertisement
Ad
When you’re traded mid-season, it doesn’t just impact the player.
“A different wardrobe certainly (laughs),” Cammalleri began when discussing all the changes that occur after a trade.
“My wife picked up one of our daughters at school, once it was official, and now you try to get things settled as quick as you could. I’m excited about the hockey opportunity and playing in Canada is always fun,” Cammalleri said.
It is easy for the player to move to a new city, because he has 20 new friends right away, but it is much more difficult for the family. Cammalleri arrived in Edmonton yesterday, and he will fly out with the team tomorrow for a 10-day road trip while his wife organizes the family. We should never underestimate the human element and emotion involved in mid-season trades.
Advertisement
Ad
Advertisement
Ad
Cammalleri was excited about the trade. “I don’t think it is conducive to talk about what happened prior. I’m just looking forward to playing for the Oilers and I believe I can still contribute,” he said.
“Players around the league watch this team for that reason. They are an exciting team to watch with the names you mentioned (McDavid and Draisaitl), and I think the sky is the limit for potential for this team offensively,” continued Cammalleri.
He is looking forward to a new opportunity, and at the very least he should help the second unit powerplay. He has 104 career powerplay goals and isn’t afraid to shoot.
“I’ve always tried to make the best play available, the best play to help us win and you can’t be scared to shoot. You have to play off instinct and not second-guess yourself offensively,” Cammalleri said.
Advertisement
Ad
Advertisement
Ad
How much does Cammalleri have left, is the main question. We’ll find out in the coming weeks and months, and it would be a Cinderella story for him to score in his first game as a member of the Oilers, exactly 15 years after he scored his first NHL goal in Edmonton.

Maroon-McDavid-Draisaitl
Lucic-RNH-Puljujarvi
Cammalleri-Strome-Pakarinen
Caggiula-Letestu-Kassian
Nurse-Larsson
Klefbom-Benning
Russell-Gryba
Talbot
Jujhar Khaira has an upper body injury and won’t play tonight. He left the games versus Vegas twice, but came back both times. Head coach Todd McLellan said it isn’t serious and will be on the road trip. It is horrible timing for Khaira. He is coming off his two best games of the season, and arguably in his career, and now he won’t play tonight. If he was healthy he’d be in for sure with Strome and Cammalleri.
Advertisement
Ad
Advertisement
Ad
Khaira, Anton Slepyshev and Drake Caggiula have had terrible luck, injury wise, this season. Just when they start playing well they get banged up and miss some games. You wonder how much different the bottom six production would look like if those three had been healthy all year.
“I’ve taken more reps on the left, which I guess would lead to more comfort, but I’m fine with playing either side,” said Cammalleri when I asked him which wing he prefers. The Oilers didn’t practice yesterday, but even without some practice time I won’t be surprised to see Cammalleri get some reps on the second unit PP, likely in Caggiula’s spot.
Cammalleri will wear #13. He has worn it since he was seven years old. “I made the rep team when I was seven, but I was the youngest and smallest on the team. My dad made me wait and pick last. When it came to me, #13 was the only number remaining. I’ve liked it ever since.”
Advertisement
Ad
Advertisement
Ad
Cammalleri becomes the 10th Oilers to wear #13. Here are the others.
Ken Linsemen (1983-1984) had 51 goals in 144 games
Risto Jalo (1986) had no goals in three games.
German Titov (2000) had no goals in seven games.
Todd Harvey (2006) had five goals in 63 games.
Andrew Cogliano (2008-2011) had 57 goals in 328 games.
Cam Barker (2012) had two goals in 25 games.
Mike Brown (2013-2014) had one goal in 35 games.
Steve Pinnizzotto (2014-2015) had two goals in 24 games.
David Desharnais (2017) had two goals in 18 games.

Schwartz-Schenn-Tarasenko
Sobotka-Stastny-Steen
Paajarvi-Sundqvist-Jaskin
Upshall-Brodziak-Thorburn
Edmundson-Pietrangelo
Gunnarsson-Parayko
Dunn-Bortuzzo
Allen
Their top line is the most dangerous in the NHL right now. Schwartz has 24 points, while Schenn and Tarasenko each have 22. They are all top-ten in league scoring and have 25 goals combined. Look for Darnell Nurse and Adam Larsson to see a lot of them this evening. They have been much more dangerous at 5×5 than on the PP. The Blues only have ten powerplay goals in 61 opportunities.
Advertisement
Ad
Advertisement
Ad
The Blues were lit up for five goals in the third period in Calgary on Monday. Head coach Mike Yeo said his team has played loose the past few games and wants them to get back to sound defensive play. He had an interesting take on line match ups.
“When we are on top of our game we actually concentrate a little more on the zone match ups, and ensure everyone is involved, as opposed to the hard matches. Obviously you will have games like tonight where you play against a guy like McDavid and it is going to be very important who we have on the ice at specific times, but we are on the road so we won’t get everything we want,” said Yeo.
Lineups (subject to change) are courtesy of DailyFaceoff.com
Advertisement
Ad
Advertisement
Ad

As good as the top line of McDavid, Leon Draisaitl and home-town boy Patrick Maroon have been and as well as second line center and former first overall pick Ryan Nugent-Hopkins along with winger Milan Lucic have played so far this season, there is still a giant black hole occupying the bottom half of their lineup.
Much like the Blues, the Oilers have had to depend on their two top lines for virtually all of the team’s offensive production. In fact, Tuesday it was announced that the Oilers had traded forward Jussi Jokinen to the L.A. Kings in return for forward Mike Cammalleri. General Manager Pat Chiarelli is starting to stink of desperation.

Find out why so many people are using Dominion Lending Centres #1 broker in Canada.
We are paid by the banks on the size of the mortgage, not the interest rate, so we try to get you as low as rate as we can. Whether it is a purchase, renewal or refinance, contact us to see what we can do to help!
Recently by Jason Gregor:
Source: Jason Gregor, Verified Twitter Account, 11/16/2017, 1:30pm