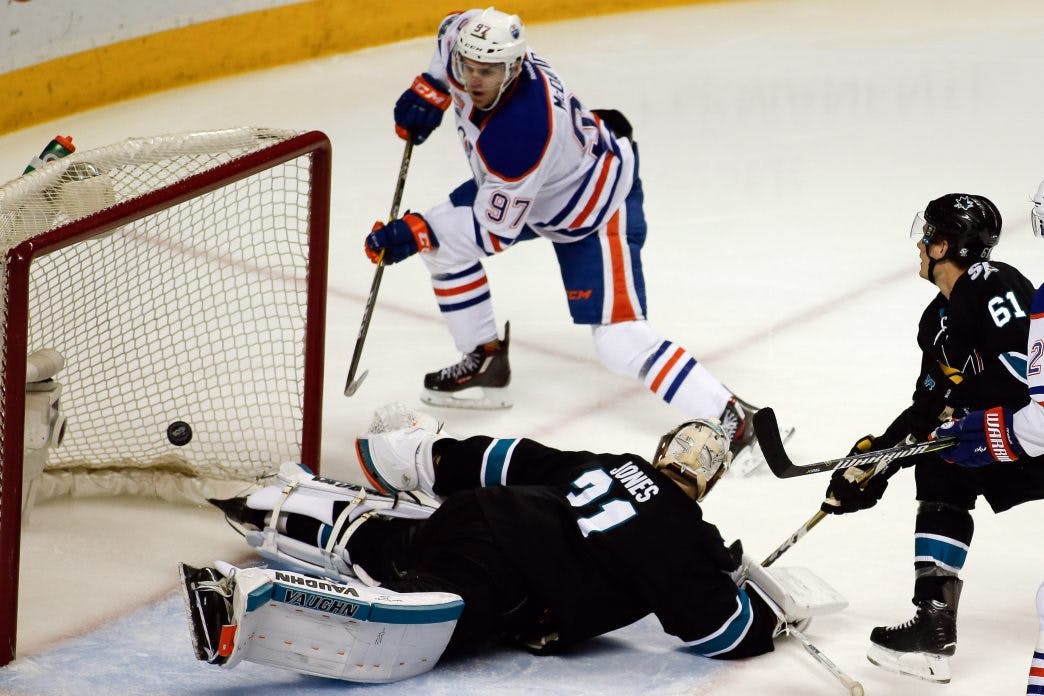 Photo credit: Stan Szeto-USA TODAY Sports
By Jason Gregor
4 years ago
Comments
Tonight the Edmonton Oilers and the San Jose Sharks will play the only game on the NHL schedule. All eyes of the NHL will be watching, and it won’t just be for what is happening on the ice.
Early this morning I felt Todd McLellan was on the hot seat and needed a victory to keep his job. Turns out I was mistaken. Oilers GM Peter Chiarelli decided he wasn’t going to wait and he fired Todd McLellan.
That means four Western Conference teams have replaced their head coach in the past 16 days. The Los Angeles Kings fired John Stevens on November 4th. Two days later three-time Stanley Cup winner Joel Quenneville was let go by the Chicago Blackhawks and last night the St. Louis Blues fired Mike Yeo after losing 2-0 to the last-place Kings.
The Oilers sit in 26th place in the NHL. A victory tonight would vault them up to 19th spot, one point behind the Vancouver Canucks for the final playoff berth in the Pacific Division. The Oilers still have two games in hand on the Canucks after tonight.
Advertisement
Ad
Advertisement
Ad
But despite being that close to a playoff spot, Chiarelli decided it was time to make a coaching change. But hiring Ken Hitchcock is a clear sign that Bob Nicholson and the rest of the Oilers upper management isn’t sure if Chiarelli will be here long term.
Hitchcock’s contract is only until the end of the season. I will be very surprised if he returns next year regardless of how the remainder of this season unfolds. If the Oilers don’t make the playoffs, Chiarelli will be gone.
McLellan was fired today, but everyone in the organization is acutely aware of what is going on. Chiarelli built this team. And if the Oilers miss the playoffs for the third time in four seasons under his watch, he won’t be around for a fifth season. Bob Nicholson is also aware of the business side, and another spring without the playoffs will have many Oilers season seat holders unlikely to renew. Numerous suite holders signed three-year contracts which expire in April.
Advertisement
Ad
Advertisement
Ad
Make no mistake, the pressure is mounting at all levels within the organization, and whether it is fair or not, usually the head coach is the first man thrown overboard when things go astray. McLellan wasn’t perfect, and like any head coach, some of his decisions were not the best, but at the start of the season I felt this roster was, at best, a 90-96 point team. I don’t think a new coach changes that.
Maybe a new voice and a different approach defensively will help. Through 20 games the Oilers proved they could be very good some nights, but also very bad other nights. How much of that is on the coach? The answer will vary for all of us, and likely varied within the halls of the Oilers offices.
Advertisement
Ad
Advertisement
Ad
This move wasn’t a total surprise, although I admit I thought Mclellan would coach tonight and if he won he’d have kept his job, and if he lost they would have fired him. Chiarelli didn’t want to wait, and now the Ken Hitchcock eras begins.
The pressure within the organization is still mounting, and by removing his head coach Chiarelli is now facing the most pressure.
He needs this decision to work out. His job depends on it.

Hertl-Couture-Meier
Kane-Pavelski-Donskoi
Sorenson-Thornton-Labanc
Goodrow-Suomela-Karlsson
Ryan-Burns
Dillon-Karlsson
Vlasic-Braun
Jones
Martin Jones is 9-5-1, but he has a subpar .894sv% and 2.94 GAA. His backup, Aaron Dell is 2-2-2 with a .920sv% and a 2.47GAA. Dell was great in the Sharks last game, but Peter Deboer wants to give Jones every opportunity to fight out of his funk. Jones is 6-2-1 in his last nine games, but in five of those victories he allowed three or more goals, and in every loss he has allowed three or more. So in eight of his last nine games the opposition has scored three or more goals. The Oilers have to find a way to get some pucks past him.

From Fear the Fin:

Edmonton’s struggle to find scoring depth on the wing has been well documented, ever since the ill-advised trades of Jordan Eberle and Hart trophy winner Taylor Hall decimated their forward corps in favor of Ryan Strome and middling defenseman Adam Larsson. Still, recently, general manager and The Art of the Deal fanatic (probably) Peter Chiarelli seems busy making calls, sending the aforementioned Strome to the New York Rangers in a one for one swap for Ryan Spooner. These kinds of moves, combined with the decision to demote to the AHL first rounders Jesse Puljujarvi and Kailer Yamamoto, have left the Oilers with little to no scoring depth.

Photoshop: Tom Kostiuk
Game Day Prediction: I had this game penciled in as a loss when I looked at the eight-game stretch against mainly Pacific Division opponents, but that was before the two losses on the weekend. As I wrote earlier I thought tonight’s effort could determine the fate of their coach. It won’t, but tonight is the first chance to make a great first impression. Many teams have won their first game with a new coach, but I don’t see it tonight. The Oilers play hard, but lose 3-2.
Advertisement
Ad
Advertisement
Ad
Obvious Game Day Prediction: The Sharks PP has been average, 18th in NHL, but they score a PP goal tonight.
Not-So-Obvious Game Day Prediction: Oscar Klefbom scores his first goal of the season. He has had more offensive success against the Sharks than any team in the NHL and that continues tonight.