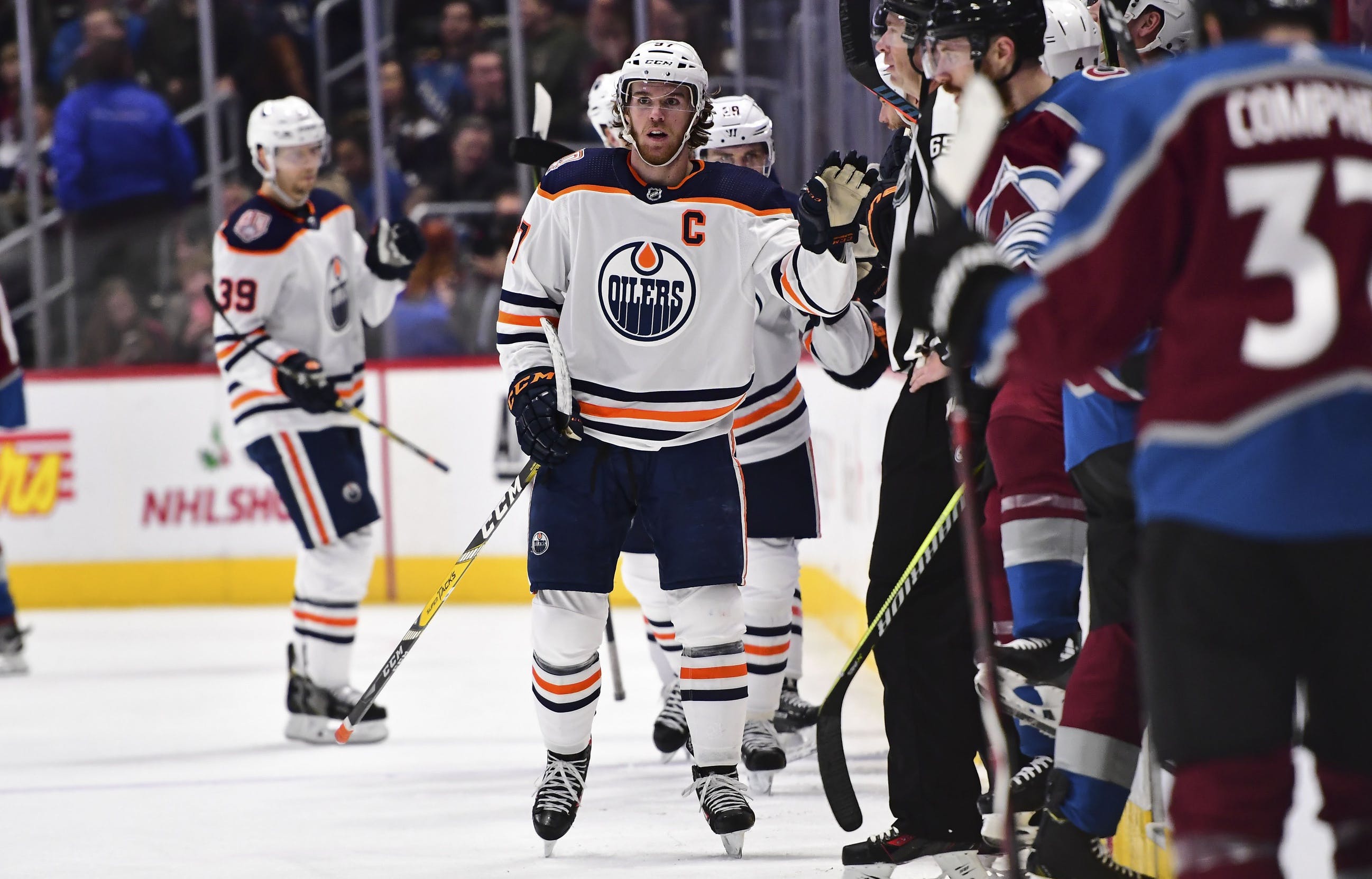 Photo credit: Ron Chenoy-USA TODAY Sports
By Jason Gregor
3 years ago
Comments
@Ryan Nugent-Hopkins is in Edmonton getting his hand/finger looked at, and in his absence, @Leon Draisaitl is likely going to play more minutes. Draisaitl played 29 minutes Sunday night in Arizona. He did play 4:10 in overtime, so he was at 24:50 in regulation. If the game is close tonight, I suspect you will see him and Connor McDavid play a lot.
Tonight is the Oilers only game in a five-day stretch, and Dave Tippett has shown he isn’t afraid to play Draisaitl and McDavid more minutes when they have two days between games. McDavid played 25:48 in Arizona, including 4:00 in overtime. Despite the high TOI on Sunday, Tippett has actually reduced the minutes of his top players this month.
In 14 games in October, McDavid averaged 23:23/game and Draisaitl played 23:51. Including last game, both players are down two minutes/game as McDavid has played 21:01/game in November and Draisaitl is at 21:45.
I see no reason to reduce their minutes much lower than that. For me, they should be averaging 20:30-22:00 minutes/game this season. Tippett had rested them up until Sunday. In the previous eight games McDavid averaged 19:54/game while Draisaitl was at 20:01. Every game is different, and if they are winning or losing by a lot Tippett will limit their minutes. In tight games he plays them more.
Advertisement
Ad
Advertisement
Ad
With Nugent-Hopkins out again tonight it makes sense to run Draisaitl and McDavid more minutes, when you consider this is their only game in a five-day span.
“Every game is different. You can have a plan on what you want to do, but once the game starts that can change depending what happens. I adjust based on what I see on the ice,” Tippett said last week when discussing ice time for his two star players. He is cognizant of how much he uses them. Situations they play in is also important to look at.
Last season McDavid averaged 22:50/game. He played 18:47 at EV, 0:38 on the PK and 3:22 on the PP.
This season he is averaging 22:18/game and played 18:23 at EV, 0:09 on the PK and 3:45 on the PP.
Advertisement
Ad
Advertisement
Ad
He is averaging :32 less per game, and that’s with him playing 23 seconds more on the PP, which is the easiest of the three on-ice situations.
Draisaitl is up slightly from last season.
In 2018/2019 he averaged 22:35/game with 18:05 at EV, 1:09 on the PK and 3:21 on the PP.
This year he is averaging 22:53/game with 17:59 at EV, 1:10 on the PK and 3:44 on the PP.
His extra time is mainly on the powerplay as well. It is important to look at situational use as more time on the powerplay is easier than more time at EV or on the PK.
The TOI of those two will be a talking point all season, but as we’ve seen already the minutes will fluctuate from 17/game minutes up to 25+ depending on the game. Unless tonight is lopsided, I suspect both will play over 22 minutes.
Advertisement
Ad
Advertisement
Ad

Top four leading scorers in the NHL…all tearing up the league. https://t.co/SxgesFZkH8

Draisaitl-McDavid-Kassian
Neal-Gagner-Chiasson
Khaira-Sheahan-Archibald
Granlund-Haas-Russell
Nurse-Bear
Klefbom-Jones
Russell-Larsson
Koskinen
It will be interesting to watch how Jim Playfair deploys his defence. In regulation time the TOI of the six D-men ranged from 17:24 to 22:05 between @Adam Larsson (17:24), @Caleb Jones (18:06), @Kris Russell (19:00), @Ethan Bear (21:07), @Oscar Klefbom (21:54) and @Darnell Nurse (22:05). That is pretty even distribution. Jones only played even strength. Larsson had 24 seconds on the PK, Nurse and Bear had 1:17 and 1:13 on the PK, Russell played 2:43 on the PK and Klefbom played 2:15 on PK and :24 on the PP. The Oilers only had one powerplay and scored 24 seconds into the man advantage.
Klefbom did play 3:47 of OT, while Nurse was out for 1:39 and Bear logged 34 seconds.
In regulation, the TOI was spread our rather evenly.
Advertisement
Ad
Advertisement
Ad
Russell and Larsson faced the Barrett Hayton-Carl Soderberg-Conor-Garland for 6:50 and then the Phil Kessel-Nick Schmaltz-Clayton Keller line for 5:40.
Nurse and Bear saw the Michael Grabner-Brad Richardson-Christian Fischer line for over 11 minutes and the Christian Dvorak-Derek Stepan-Vinnie Hinostroza trio for around five minutes.
Klefbom and Jones faced the Stepan line for 7:45, the Kessel line for 4:40 and the Soderberg line for just over four minutes.
Nurse and Bear played almost exclusively with the McDavid line. They didn’t play more than 1:51 with any other forward group.
Russell and Larsson played seven minutes with Haas’ line, five minutes with Gagner’s line and around three minutes with Sheahan’s.
Klefbom and Jones played nine minutes with Gagner’s line, around four with Sheahan and about 3:30 with McDavid’s.
The Coyotes were one of the few teams who deploys a “checking” line against McDavid. They mainly faced the Michael Grabner-Brad Richardson-Christian Fischer.
Advertisement
Ad
Advertisement
Ad
I’m curious to see what @Jared Bednar does tonight. In Edmonton on the 14th of November, McDavid only played 11:25 at EV, and he faced Nathan MacKinnon for just over half of those minutes. Cale Makar was out for 6:19, while Ryan Graves played 5:04.
I suspect that line and D pair will see McDavid and Draisaitl the most tonight.

We’ve upgraded every aspect of this year’s gear and we cannot wait for you guys to check it out! The 2019 Blackout collection is coming soon and available only at NationGear.ca.