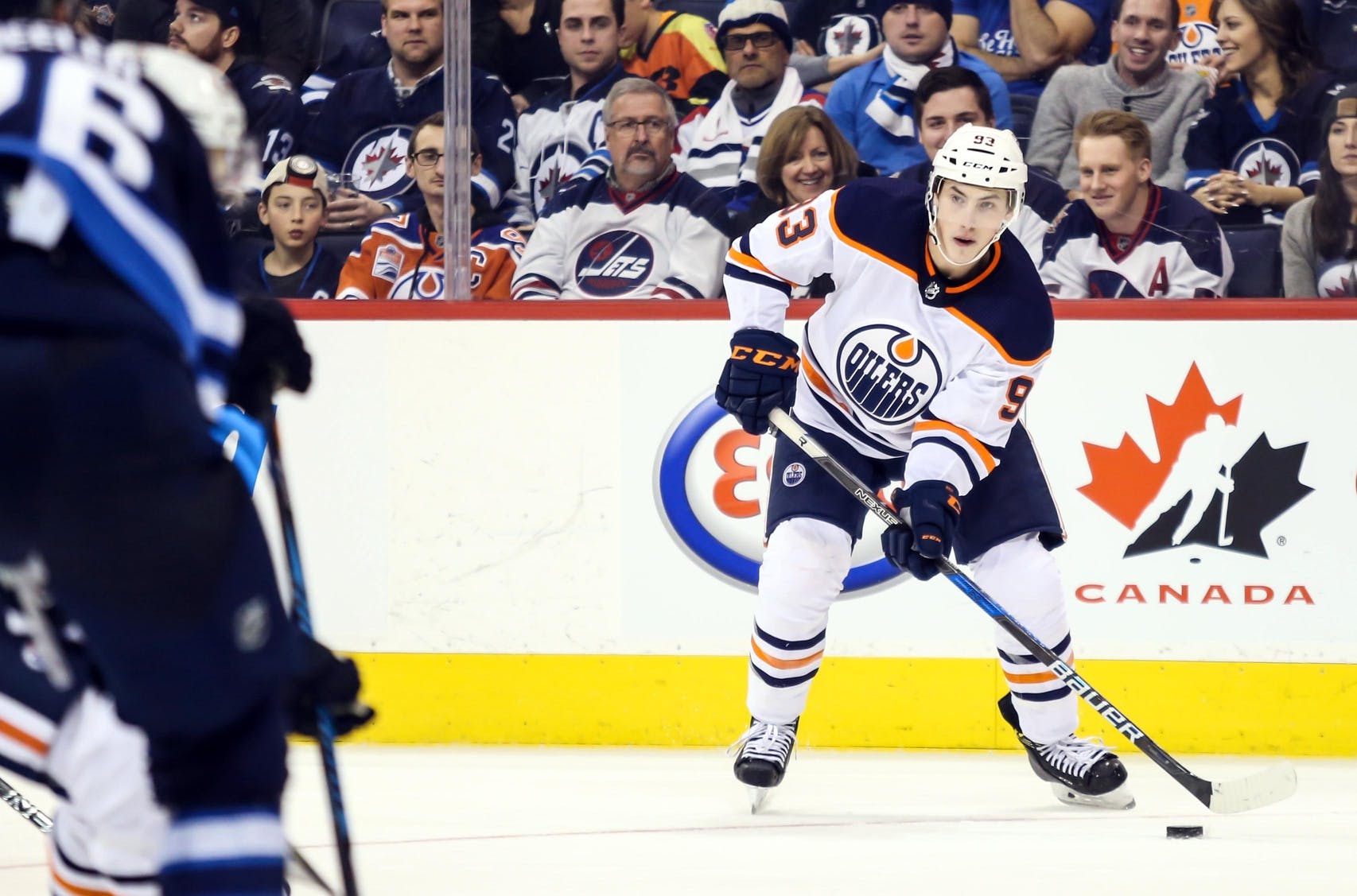 Photo credit: © Terrence Lee-USA TODAY Sports
By Jason Gregor
3 years ago
Comments
Tonight will be the first opportunity for Oilers players to make an in-game impression for new head coach Dave Tippett. Tippett has watched them in practice, as well as those who participated in yesterday’s scrimmage, but how they fare in preseason will ultimately decide who starts the season in Edmonton.
Many players have a fresh slate, and tonight they can influence the new coaches into seeing the best aspects of their play. The goal of every player is to make the NHL team, but in reality that isn’t possible.  From my seat, I see 18 forwards competing for 14 roster spots and ten defencemen battling for seven spots. Both goalies positions are spoken for with @Mikko Koskinen and @Mike Smith.
The best battles will be in the bottom six and the second and third right defence slots as well as the #7 spot.

I’m very cautious to take too much out of early preseason games, and I would put very little stock into yesterday’s scrimmage. It didn’t involve any full-time NHL players. However, you should be excited about @Evan Bouchard’s potential. He will enter the preseason with loads of confidence. No one should be surprised his offensive production was better than everyone in the scrimmage yesterday. He is the most skilled of those players.
Advertisement
Ad
Advertisement
Ad
He was noticeable and that is what you want. The main job for young players, or older rookies like Gaetan Haas, is to get noticed. Do something every day that grabs the coach’s attention. I believe Bouchard and Nygard stood out yesterday, but now they have to continue that in the preseason.
One game won’t earn you a roster spot. Or at least it shouldn’t, and as you get set to watch four preseason games in the next five days, I’d recommend a cautious approach when evaluating players. Remember how good many felt @Kailer Yamamoto looked the past two preseasons when he scored 5-2-7 in September of 2017 and 6-3-9 in six games last year. Or how about Ty Rattie ripping up the league with 4-7-11 in only four games last September.
Advertisement
Ad
Advertisement
Ad
Preseason games are the only games we have to evaluate and debate a player’s potential to make the team, so I understand when a player rips it up people will get excited and expectations rise. However, the quality of competition and the pace of the game is much different than in the regular season. The challenge for coaches is to find the right balance in what they are looking for.
I know Tippett will be watching closely to see if players play the system the way he wants. Are they making the right reads defensively and in the neutral zone? Are the penalty killers in the right spots? Are they getting pucks out when they have a chance, and how are those defenders who are battling for the three open spots defending?
Advertisement
Ad
Advertisement
Ad
Tippett has made it clear his number one priority is to lower goals against. The battle for bottom six jobs might come down to who finds the balance between being solid defensively, while also adding some offensive chances.

Gagner-RNH-Neal
Khiara-Sheahan-Archibald
Nygard-Haas-Chiasson
Benson-Cave-P.Russell
Klefbom-Persson
Jones-Benning
Lagesson-Bouchard
Skinner
Wells
Tippett and GM Ken Holland wanted to create competition for spots and almost all of those battling for jobs (excluding Marody, Jurco and Granlund) in the bottom six and three blueline jobs (excluding Bear and Manning) are in the lineup.
If one line or a few individuals have a great shift then Tippett will see how the others respond. Healthy competition is a good thing.

Advertisement
Ad
Advertisement
Ad
1. Remember last season when the Oilers had the opportunity to have Kailer Yamamoto’s first season slide? Because he was 19 when training camp opened, he was in a unique spot where if he played in the NHL, and played fewer than ten NHL games his contract would have slid. He could have played four years on his ELC. The Oilers could do the same this season with Evan Bouchard. Yamamoto played 17 NHL games, scoring 1-1-2. He wasn’t a difference maker at all. What a waste of an opportunity to gain an extra year on his ELC. If Bouchard is ready, and can help them win games, I understand why’d you play him. But if not, then use this unique window to their advantage and let his contract slide. **Ryan McLeod does not qualify for the slide rule due to when he signed his contract (in 2019, not 2018). He likely didn’t sign last summer for that specific reason. I’d guess Rapheal Lavoie might do the same. Originally I had McLeod here, but changed it after realizing the error.***
2. Teams need to dress eight veterans in a preseason game. Here is what the NHL considers a “veteran”.
— A forward or D-man who played in 30 or more NHL games the previous season.
— A goalie who dressed in 50 games or played in 30 or more NHL games the previous season.
— Any player who has played in 100+ NHL games in their career.
— A first round pick from the previous draft. Philip Broberg would be considered one, but he isn’t in camp.
Advertisement
Ad
Advertisement
Ad
3. I’m curious if any of tonight’s roster plays tomorrow in Vancouver. The Canucks are in Calgary tonight with very few NHL regulars. They will play many NHLers tomorrow at home against Edmonton. It would be a much better gauge for Tippett to see how his group looks against NHL players.