Advertisement
Ad
Get Ready: Two-Month Playoff Race Is On 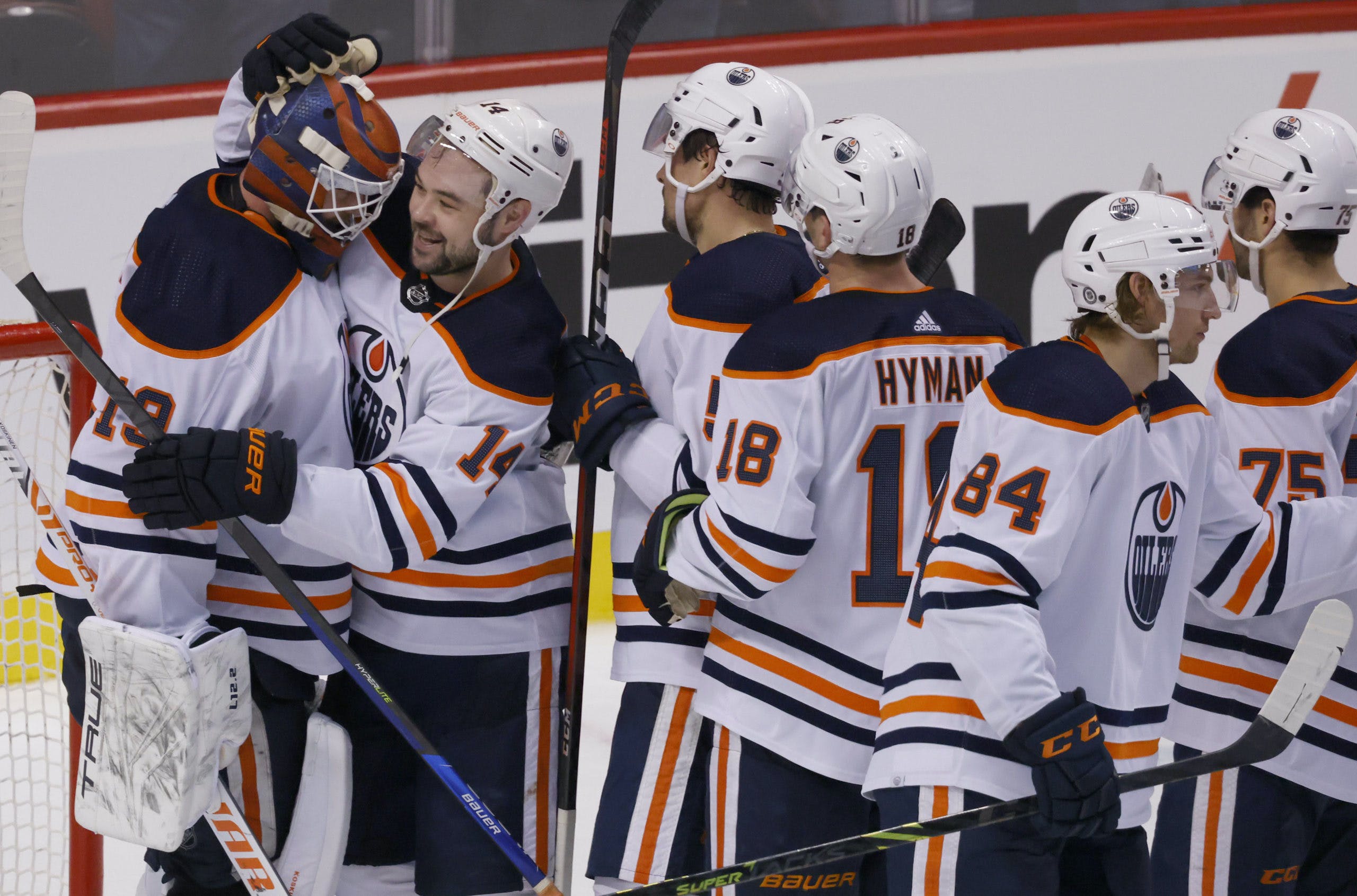 Photo credit: Reinhold Matay-USA TODAY Sports
By Jason Gregor
11 months ago
Comments
Get ready for a two-month race for six playoff spots: one in the central, three in the Pacific and two Wild card spots. We have 61 days and 261 games, 75 of which are head-to-head involving the 11 teams in the race, to find out which six make it.
I included Calgary, even though they have two or three games in hand on most teams, are leading the Pacific Division and are seven points ahead of the ninth place team in the West, because the Flames do play many of the teams battling for a playoff berth. And Minnesota was included as well, despite being in a good spot and with the best remaining schedule.
I also included Winnipeg and San Jose, even though they are currently six and seven points, respectively, out of a playoff spot.
The Flames, Wild and Sharks play many games against the other teams which is why I included them.
Here are the current standings:
We will see 75 games involving the 11 teams in the mix. I do think Calgary and Minnesota are in good spots, but included them because they have so many head-to-head games against the other teams.
Advertisement
Ad
Advertisement
Ad
Here is a schedule of how many head-to-head games each team has.
** H&A = Home and Away, meaning they play that team once at home and once on road.
1A, 2H = One away game and two at home.
HTH = Total amount of head-to-head games a team has v. the other 10 teams in the chart.
The Sharks play 19 of their remaining 29 games against teams they are chasing. I don’t see them getting in, but they control their own destiny more so than other teams.
While the Sharks face the teams they are chasing, the Winnipeg Jets only have five games against the other 10 teams. Not ideal for them.
The others have between 12-16.
Las Vegas has questions with the health of Robin Lehner, and they only have 12 home games remaining.
Advertisement
Ad
Advertisement
Ad
Here is a breakdown of home and away games:
Minnesota 20-12
Calgary 18-13
Winnipeg 17-12
Edmonton and Nashville 16-13
Vancouver 16-12
Dallas 14-16
LA 14-15
San Jose 13-16
Anaheim 13-14
Vegas 12-17
The longest road trip Edmonton has is three games, and they only play three more games in the East (Philly tomorrow and Columbus and Pittsburgh in April).
Anaheim has a five-game road trip (CHI, NSH, NJ, NYI and NYR) and a four-gamer (PHI, CAR, FLA and TB). They have a lot of travel down the stretch.
Calgary plays 12 games at home and four on the road in March, but every road game is oddly, only a one-game trip. They have a four-game trip in LA, Anaheim, San Jose and Seattle in April and finish the season with three road games in Nashville, Minnesota and Winnipeg.
Dallas has 10 road games and four home games in March. They are 10-13-2 on the road this season. How well they play on the road in March likely determines if they will remain in the playoff race in April.
Advertisement
Ad
Advertisement
Ad
Los Angeles starts March with four games in Dallas, Columbus, Buffalo and Boston, but then eight of their next 10 are at home. That homestand could impact how aggressive Kings GM, Rob Blake, is heading into the trade deadline.
Las Vegas has one five-game road trip and four three-gamers. They have a very busy March, 16 games, and Lehner’s health will have a major impact on what they do prior to the trade deadline. Vegas has actually been better on the road (15-8-1) than at home (14-12-3) so far.
Minnesota is 16-4-1 at home and 20 of their remaining 32 are at home, including a nine-game homestand to end the month of March. They do have a four-gamer to start April, but the travel isn’t too bad as the play in Carolina and Washington (April 2nd/3rd) then in Nashville on the 5th and St. Louis on the 8th. They have no games west of them the rest of the season.
Advertisement
Ad
Advertisement
Ad
Nashville has one three-game road trip in Anaheim, LA and Vegas right after the trade deadline on March 21st, 22nd and 24th. They have three sets of back-to-back games, but two of them come in the final week of the season when they play five games in seven days when they play in Tampa on April 23rd, home to Minnesota and Calgary on the 24th and 26th, then in Colorado and Arizona on the 28th and 29th. If they aren’t in a playoff spot when the final week begins they could be in big trouble.
San Jose plays four times in the first 11 days of March, but then they have 25 games in the final 49 days. Six of their first eight games in March are against Vegas, Nashville, Anaheim and Los Angeles (three times) so if they have any hope of being in the mix by the trade deadline they likely need to win five of those games.
Advertisement
Ad
Advertisement
Ad
Vancouver has three games remaining on their current road trip, before a seven-game homestand that wraps up on March 20th. If they are in a playoff spot after those seven games does Jim Rutherford become a buyer? It will be interesting to see if the Canucks can stay in the hunt in the next three weeks.
Winnipeg has 10 games before the trade deadline and six are against current playoff teams. The Jets are longshots to make it, and unless they go 8-2 in their next 10 I see them as a seller.

Oct 16, 2021; Edmonton, Alberta, CAN; Edmonton Oilers forward Jesse Puljujarvi (13) celebrates a third period goal against the Calgary Flames at Rogers Place. Mandatory Credit: Perry Nelson-USA TODAY Sports
Here is a breakdown of remaining games against playoff teams (and I counted Edmonton, Anaheim and Vancouver as playoff teams as they are tied or within three points of Dallas).
Anaheim: 17 games v. playoff teams (PT), and 12 v. non-playoff teams (NPT).
Calgary: 19 PT and 12 NPT.
Dallas: 19 PT and 11 NPT.
Edmonton: 18 PT and 11 NPT.
LA: 16 PT and 13 NPT.
Las Vegas: 14 PT and 15 NPT.
Minnesota: 21 PT and 11 NPT.
Nashville: 19 PT and 10 NPT.
San Jose: 23 PT and 6 NPT.
Vancouver: 17 PT and 11 NPT.
Winnipeg: 16 PT and 13 NPT.
Advertisement
Ad
Advertisement
Ad
The Sharks won’t make it. I see the Ducks falling out as well and I think the Jets are too far back with not enough games against teams they are chasing. Thatcher Demko gives the Canucks a chance, but they need to improve their home record significantly in early March.
I think Minnesota and Calgary are in.
And that leaves Nashville, Dallas, Los Angeles, Edmonton and Vegas to battle for the final four spots.
Edmonton is tied with Dallas despite inconsistent goaltending all season. Now with Mikko Koskinen and Mike Smith healthy, and Stuart Skinner ready in the AHL they will get good enough goaltending to get in.
I like the Kings. They have a decent schedule and have the NHL’s fifth best points percentage since January 1st. They get in.
Advertisement
Ad
Advertisement
Ad
One of the Stars or Preds automatically gets the third spot in the Central. I can’t see the Predators trading Filip Forsberg. Dallas and Nashville have very similar schedules and it might come down to goaltending where Nashville has the advantage.
And then there is Vegas. On paper, they have a very good team, but Mark Stone is out, Lehner has a labrum issue and Vegas has struggled in 2022. They are 7-8-4 since January 1st. They have an easier schedule with more games against non-playoff teams than playoff teams, but they are on the road a lot.
For the first time in franchise history, they are in a playoff race and right now they might have the most question marks of the five teams battling for the remaining four spots.
Advertisement
Ad
Advertisement
Ad
Which teams do you have making the playoffs?