Advertisement
Ad
Highlights and Numbers: Oilers cruise to an easy win over Seattle despite a sloppy, inconsistent effort 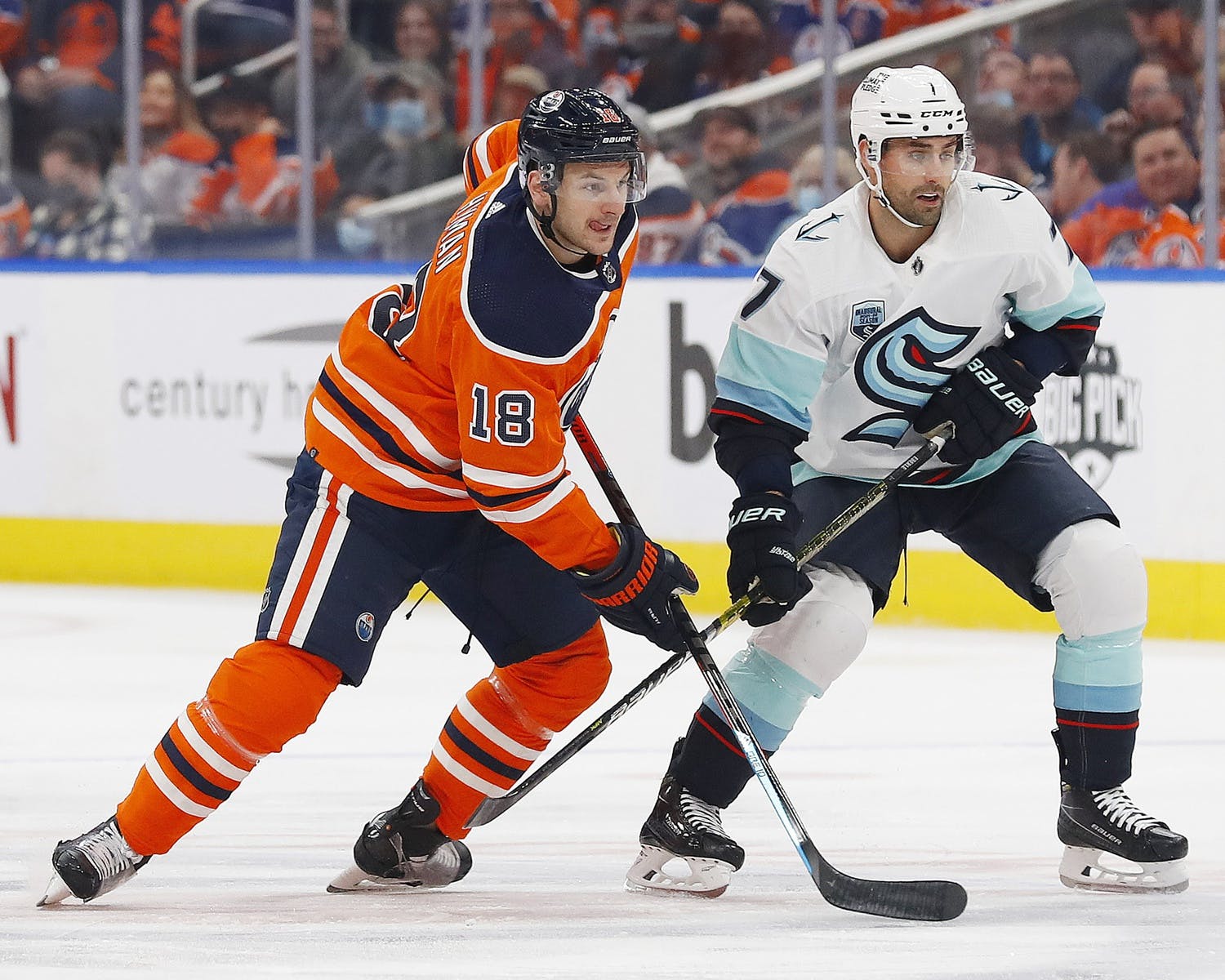 Photo credit: © Perry Nelson-USA TODAY Sports
By Cam Lewis
1 year ago
Comments
That’s what an expansion team is supposed to look like.
The Oilers put forward far from their best effort on Monday night but the Seattle Kraken weren’t able to capitalize. Mikko Koskinen stood tall for Edmonton when he needed to and the Oilers were able to put five goals past third-string goaltender Joey Daccord en route to a commanding 5-2 win.
After watching the Vegas Golden Knights hit the ground running immediately upon entering the league, it’s refreshing to see a brand new team go through a bit of a struggle. Seattle does a few things well but they’re clearly lacking in high-quality talent. They managed to control possession for large chunks of time but they struggled to capitalize on the chances that Edmonton gave them.

When looking at Seattle prior to the season, I expected them to be a quality team because they looked like a team that would be difficult to score on. The clear weakness the Kraken have would be scoring goals because their forward group doesn’t feature much in the way of high-quality talent. I suspect Seattle’s defensive prowess will come around once they can start rolling their ideal goaltending tandem of Philipp Grubauer and Chris Driedger but it’s pretty clear that scoring is going to be a challenge for this team.
Advertisement
Ad
Advertisement
Ad
One of their few actual scorers, Jaden Schwartz, scored his first goal as a member of the Kraken in the first period shortly after Edmonton went ahead 1-0.
This goal was emblematic of a difficult night from the Oilers’ top defensive pairing, and Darnell Nurse in particular. Schwartz picked up the puck in Seattle’s zone, sped up through the neutral zone, and busted right through Evan Bouchard and Nurse before tucking a backhander through Koskinen’s five-hole. Nurse absolutely needs to lay Schwartz on his ass on this play.

schwartzy finds the back of the net for his first goal as a #SeaKraken!! 🦑 pic.twitter.com/i3JaekUj8Z

One of the things Seattle does very well is kill penalties. Coming into Monday’s game, the Kraken had allowed just two goals on the penalty kill over the course of 20 opportunities, good for a 90 percent efficiency. Edmonton has the league’s best power-play by a wide margin and they were able to make Seattle’s kill look like a turnstile on this go-ahead goal in the first period.
Advertisement
Ad
Advertisement
Ad
Tyson Barrie fired a pass from Edmonton’s goal line to Ryan Nugent-Hopkins, who was waiting just outside of Seattle’s zone. From there, Nugent-Hopkins sauced a pass to Zach Hyman, who was busting towards the net. Hyman then hit Leon Draisaitl, who had burned past Adam Larsson, for a backdoor tap-in. That’s three perfect passes in the span of about six seconds that resulted in a gorgeous goal.

He shoots, he scores!

Though this wasn’t a power-play goal, it looked like one. The Oilers maintained possession in Seattle’s zone for over a minute and had the Kraken completely gassed and just following the puck around the ice. A sequence like this shows how Edmonton’s top-level talent can simply dominate a team like Seattle when they get set up in the offensive zone.
Connor McDavid lured multiple Kraken checkers to him and slipped a no-look pass to Draisaitl who was joining the play from the blueline. Draisaitl pulls a move around an exhausted Kraken defender and the puck winds up in front of the net for Duncan Keith who chipped it into the open net.
Advertisement
Ad
Advertisement
Ad

The Oilers allowed Seattle to climb to within one goal before the end of the second period on a play that was poorly ready by Slater Koekkoek.
Jamie Oleksiak fired the puck up to Edmonton’s blueline and Koekkoek slid over to check Morgan Geekie, who absorbed the hit. Nathan Bastian then picked up the loose puck, carried it into the zone, and hit defenceman Carson Soucy, who sniped a shot over Koskinen’s blocker.
Devin Shore did a good job at racing back into the play to cover for Koekkoek, as he took out Ryan Donato, who was charging the net. Koekkoek went after Bastian, who had the puck, even though Barrie had already limited his shooting lane. As a result, nobody was covering Soucy and he was given all kinds of time and space from the slot to get an excellent shot away. Either Koekkoek or one of the two wingers needs to be picking up Soucy on this play.
Advertisement
Ad
Advertisement
Ad

The fourth line responded early in the third period.
Shore blocked a shot in Edmonton’s zone and Turris picked up the puck, carried it over the red line, and fired it deep into Seattle’s zone. Tyler Benson appeared to be going for the puck, but he lured Seattle’s defender behind the net with him while Shore picked it up off the wall. While everyone was focused on Shore, who had the puck, and Benson, who dragged a Seattle defender with him around the net, Kyle Turris was able to sneak to the front of the net completely unnoticed.
Shore hit Turris with a perfect pass and he slipped it past Daccord for an easy goal. This is excellent work by Edmonton’s fourth line and it goes to show what can happen when you load all four lines with some skill. Shore and Turris are the focus of this play, but, again, the work by Benson to give Shore that time and space was excellent.
Advertisement
Ad
Advertisement
Ad

Just some fantastic work by the fourth line here. Turris buries it & his face says it all. 😯

Finally, we have the icing on the cake, which came in the second half of the third period.
Kailer Yamamoto intercepted a pass in the neutral zone, flipped it to Draisaitl, and then busted into Seattle’s zone. While Draisaitl lured Seattle defender to him, Yamamoto got his wheels moving, and Draisaitl hit him with a pass in stride. Yamamoto took the partial break and tucked a backhand-to-forehand goal between Daccord’s legs.
This was a gorgeous goal by Yamamoto, his first of the season, and it was a perfect way to get what surely felt like a 1,000 pound monkey off of his back.
Also, I’ll include this here, because it was one of the worst examples of a non-call on McDavid that I’ve seen this season…

It’s so obvious these refs don’t want to give the Oilers a power-play because they know they’ll score. It’s actually complete bullshit. This is the 4th time they’ve tripped McDavid and no call. @NHL fix your refs pic.twitter.com/Tvx9FG7b7L

McDavid had drawn just one penalty this season, which is absolutely insane given the amount of time the puck is on his stick. Refs need to start calling the rules rather than actively trying to keep the game close. Edmonton could have had a much more lopsided score on Monday if they were given as many power-play opportunities as they should have had.
Advertisement
Ad
Advertisement
Ad

I won’t go into all too much detail about the statistics from this game.
It felt as though the Oilers took the Kraken, a team coming in on the second leg of a back-to-back, fairly lightly and didn’t put forward their most complete effort. Seattle was able to control play for extended periods of time while the Oilers looked as though they were asleep but the key difference is Edmonton has the high-level skill to capitalize on their chances and Seattle doesn’t.
That’s why we see a shot chart that moves in the Kraken’s favour, but, to be honest, at no point during this game did it feel like the Oilers were going to lose.
Anyway, a few things to note…
This was a tough showing from Edmonton’s bottom-six, the third line in particular. The trio of Derek Ryan, Zack Kassian, and Warren Foegele have been a bright spot early on, but that wasn’t the case on Monday. They were on the ice for nine minutes at even-strength and got outshot by Seattle 6-to-2. They did manage to suppress Seattle’s offence, but they weren’t able to generate anything of their own.
Advertisement
Ad
Advertisement
Ad
On a more positive slant, this was a much better showing from the team’s second line than it was last game. The Draisaitl, Yamamoto, Nugent-Hopkins trio was largely invisible against Vancouver on Saturday but they bounced back with more flair against Seattle. They were the only forward trio to beat Seattle in shot attempts, going 8-to-6, and they clicked for a pair of even-strength goals.
I like the way the top-six is structured right now and, hopefully, this is a sign that the Draisaitl, Yamamoto, Nugent-Hopkins trio is going to get rolling.