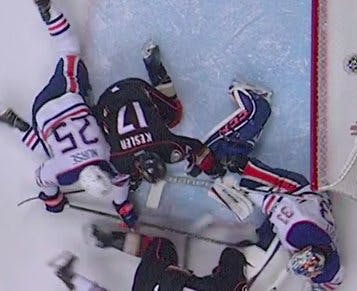 By Zach Laing
2 years ago
Comments
The 2016-17 season was a special one. Connor McDavid broke 100 points in 82 games. Leon Draisaitl had 77 points in 82 games. Cam Talbot played out of his mind posting a .919 save percentage.
And for the first time since the 2005-06 season, Edmonton made the playoffs. Things were incredible in Edmonton after a 47-26-9 regular season and they were set for a first-round matchup with the San Jose Sharks.
After six games, the Oilers dispatched the Sharks, and Edmonton moved onto the Anaheim Ducks.
With Edmonton jumping out to a 2-0 series lead winning both games in Anaheim, the series shifted back to Edmonton where the Ducks stole two games including a game four-overtime win. With the series tied at two, the two clubs went on the road back to Anaheim.
And what transpired next was a series of unfortunate events. Let’s travel back in time to that day when then OilersNation scribe Jonathan Willis had this to say of the game:

The story here is either Edmonton’s collapse in the last four minutes of the third period or the NHL’s miserable goalie interference call on the crucial 3-3 goal. We’ll get to both in a bit, but let’s start from the beginning.
The early contest was not kind to the Oilers. Leon Draisaitl made a defensive zone turnover on the first shift, and chaos ensued. Mark Letestu lost the draw which followed and Anaheim nearly took a 1-0 lead on the second shift.
Worse, Matt Benning was hammered into the boards by Nate Thompson and stayed down until the whistle blew. Hampus Lindholm rang a puck off the post. Ryan Getzlaf caught Andrej Sekera along the boards and then Sekera had to be helped off; he would not return. Oscar Klefbom blocked a shot high and was in obvious pain on the bench.
For good measure, there were penalties. Getzlaf took a penalty shot after Milan Lucic was ruled to have hooked him just enough for the call. Patrick Maroon took a far more blatant high-sticking minor. Benning, who returned in the first period, took a slashing minor that had Twitter seeing red.
Through it all, there was Cam Talbot. Talbot turned aside 13 shots, dealt with a ridiculous amount of traffic in his crease (even drawing one penalty) and kept Edmonton afloat through a period in which they were badly outplayed.
And the Oilers took advantage. Klefbom returned for the first shift of the second, and picked up a point on Draisaitl’s 1-0 goal. The Ducks took a couple of penalties, and Edmonton took a 2-0 lead thanks to the magic of Connor McDavid and Mark Letestu on the power play. Corey Perry got burned by his reputation for diving, and the Oilers got away with a 3-0 goal, too. The second period was the reverse of the first, as Edmonton dominated the play and the scoreboard, despite a badly banged up defence corps.
The physical play never stopped – Kris Russell got hammered and returned in the game after a brief interlude – and the Ducks didn’t go away but it looked like the Oilers were going to grit out the win.
That is, until the last five minutes of the third. Edmonton had been trying to hang on for most of the period, and finally the team couldn’t. Anaheim scored once and then a second time. Then, with 15 seconds left, Darnell Nurse pushed Ryan Kesler into the crease. Kesler, opportunist that he is, took advantage of the situation and grabbed Talbot’s pad with his hands.
The NHL ruled that a good goal, with an official explanation that put all the blame on Nurse and didn’t even mention Kesler grabbing the pad. And thus a 3-0 lead turned into overtime.
Overtime was thrilling, as it is, with chances at both ends of the rink. But it ended with Corey Perry scoring the winner off a Ryan Getzlaf pass as Draisaitl veered too far to the boards to get back into position. The ending would have stunk for Oilers fans regardless; that it was Perry driving the knife home was insult added to injury.

Look, I can’t be the only one whose blood gets boiling a little bit reading through all this again. Edmonton had built such a strong lead in that game and so many questionable things happened. Why was Matt Benning forced to be down for so long? How could Edmonton have collapsed in on themself after building a 3-0 lead?
Advertisement
Ad
Advertisement
Ad
And the biggest question of all: How could the league miss Ryan Kesler grabbing Cam Talbot’s pad in the crease? It all happened in the dying minute of the third period.
A mad scramble in front of the net saw bodies flying everywhere. Kesler got shoved from behind from Darnell Nurse falling into the Oilers crease. Rickard Rakell managed to throw a backhand at the net that slid in through the mass of bodies.
Referee Chris Rooney, who was standing right on top of the net, called a good goal. The league initiated a review of the play as they do for goals in the final minute confirming a good goal.
But we all know what happened. Ryan Kesler held Cam Talbot’s pad disallowing him the ability to try and make a save.
Advertisement
Ad
Advertisement
Ad

“I couldn’t bring [my leg] back underneath me. There was no way I could do that,” said Oilers goaltender Cam Talbot.  “I watched the replay and like he has a chance to get up and almost looks like he kind of even digs in over my pad and makes it look like he’s just holding on so I don’t know. The only thing I got to see was the jumbotron replay so maybe they have another angle. I don’t know.” Source.

Despite the loss and falling 3-2 in the series, Edmonton roared back in game six at home. A five-goal first period helped launch the Oilers to a 7-1 win, before Edmonton faltered in game seven losing the series.
I’m not one to go about making excuses, as Edmonton had more than enough time to win the series, but the Kesler pad grab was, and still is a major controversy. What would’ve happened if the league made the right call and disallowed the goal? Who knows.
Anaheim went on to play the Nashville Predators in the conference finals, who they lost to in six games.
Here’s what some Nation citizens said about the game:

fisherprice:
Wow, what an effort out there by the NHL Referees. Totally taking over the series and gutting out two wins in a row there. I know we’re all disappointed as Oilers fans, but you gotta give credit where credit is due. It’s hard to win in the playoffs and the NHL Referees pulled out a huge one tonight.
Advertisement
Ad
Advertisement
Ad
DXB:
I feel violated, kind of sick to my stomach. Russel had a massive game and deserved a better fate. Gritty effort by most. Who else in the league would have been awarded a penalty shot on that play other than Getzlaf? Let’s hope they can draw positives and gut one out at Rogers, let’s hope all the controversy is setting us up for a game seven dagger to the hearts of the Ducks in front of their home town crowd.
Johnny Zylon:
Phantom call on Lucic results in a penalty shot. 2 mins on Ritchie for a deliberate intent to injure instead of a match penalty and the regular non-call of goalie interference. Anybody need more proof there is a conspiracy ? Anybody? I just cannot believe professional referees can be so incompetent unless somebody told them to.
Advertisement
Ad
Advertisement
Ad

Yup. Turns out I’m still mad about this.
On Twitter: @zjlaing