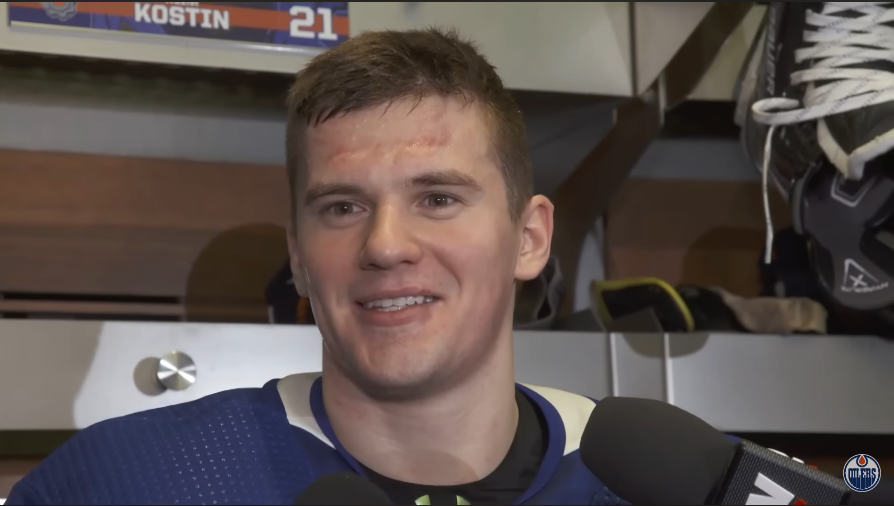 By Zach Laing
1 month ago
Comments
It hasn’t taken long for Klim Kostin to become a fan favourite in Edmonton.
He’s a physical presence on the ice and has begun to chip in some offence, and off the ice, he’s proving to be quite a character. Just last week he was sneaking into scrums with a hockey stick pretending it was a microphone.
On Thursday, he poked fun at Jim Matheson and other members of the Oilers media.

LMAO I am dead this guy is officially my favourite #LetsGoOilers pic.twitter.com/RBqAFSIzxC

Good times. TSN’s Ryan Rishaug later added that “Kostin who says he spends time on Twitter at night wanting to know what fans think of his game. BTW this wasn’t a shot at Matty. He was laughing with him about it, not calling him out, it was good natured. We all had a good chuckle, so did Matty.”

The NHL is reportedly considering adding more rival games to the schedule as soon as next season.
Advertisement
Ad
Advertisement
Ad
This, according to a Sportico report released Thursday morning. The paywalled articles suggests team owners and executives have been discussing having more games between geographical rivals.

As soon as next season, teams like Edmonton and Calgary could play as many as eight games against each other, rather than the current three.

The idea behind this shift was partially bolstered by the NHL’s COVID-disrupted 2020-21 season, when the league redrew all four divisions

Despite this, NHL insider Chris Johnston poured some cool water on it.
“FWIW, I’m told it’s ‘not accurate’ that NHL teams could meet as many as eight times next season,” Johnston tweeted. “There’s certainly a desire among some clubs to face rivals more often, but there’s only so much than can be done if teams are going to play in all 32 buildings each season.”
I can understand both sides of the equation, even though I’d love to see more of a focus on inter-division games. As it stands, each team plays each other twice over the course of the season, but faces foes in their conference more. The Oilers, for example, play the Calgary Flames a measly three times, but get to see Central Division opponents in Arizona, Colorado and Chicago as many times.
Advertisement
Ad
Advertisement
Ad
I think there’s a way to go about it where you play each team outside of your division twice and each team inside your division more. It’d make the games matter more and add some of that rivalry-ness back to the mix.

Ryan Reaves was in the headlines today for a massive hit he laid on Detroit Red Wings defenceman Filip Hronek Wednesday night.
The Minnesota Wild forward caught him with a high, hard, albeit clean, hit.
On Thursday’s edition of Daily Faceoff Live, Frank Seravalli and Mike McKenna discussed the collision.

Seravalli: “Let’s start with what Matt Larkin referred to on Daily Faceoff as ‘the hit of the year.’ Ryan Reaves crushed Filip Hronek of the Red Wings, a guy who’s had an excellent year on the blueline for Detroit.
Mike, what are your thoughts on this hit?”
McKenna: “This is just a freight train. And here’s the thing, Hronek skates right into Reaves. If you back the clip up and watch Reaves well in advance, he actually circles outside the blueline and all he’s doing is flowing forward, he doesn’t take any steps at all. Hronek skates right into him.
I don’t like victim shame, but Hronek has to be aware of his surroundings. This wasn’t a predatory hit to me in any way. I’m sure Reaves saw Hronek coming and thought ‘well, this is going to be a big hit, nothing I can do about it.’
This is like when you’re riding your bike as a kid, and you look away for a second and the next thing you know you’ve planted yourself in an oak tree.
I’ve seen worse hits in recent years where it felt predatory and a player was clearly taking advantage of someone. With this one, Hronek had a chance to get out of the way or do something different here. I don’t like to see anyone get hurt but this one was simply time and space. It was going to happen.”
Seravalli: “The look on Hronek’s face, it was deer in the headlights, it’s like he knew, I’m in big trouble here and I’m going to take one.
And here’s the thing, by the letter of the law, this hit is absolutely clean. I’ve been advocating for physical hockey forever and the old me would be celebrating and clapping for this huge hit. But I saw a Tweet last night from Chris Nowinski, a former NCAA football player who’s now a doctor, and it made me stop in my tracks and think, he’s onto something…