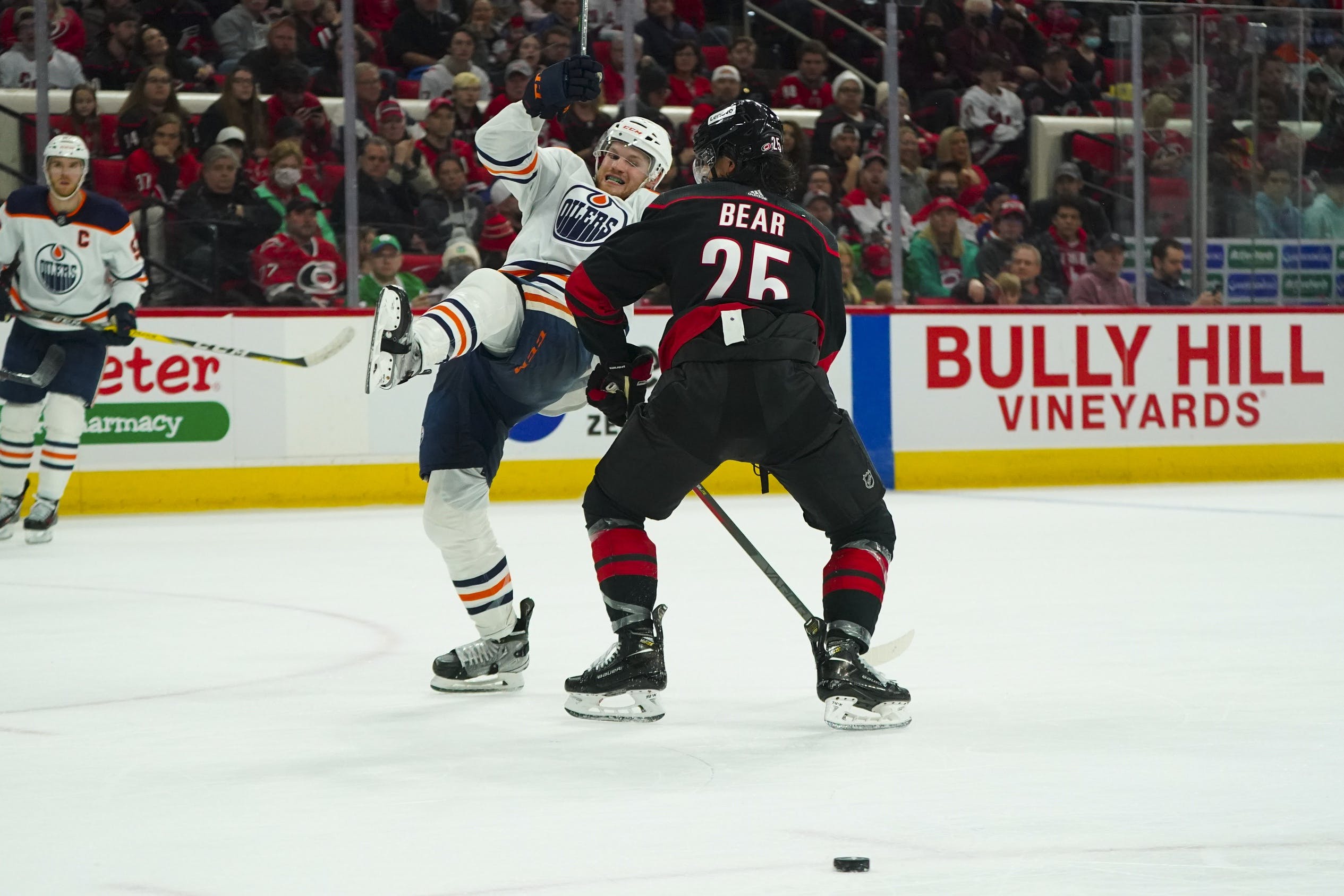 Photo credit: © James Guillory-USA TODAY Sports
By Cam Lewis
26 days ago
Comments
Former Edmonton Oiler Ethan Bear is reportedly on the trading block and the struggling Vancouver Canucks appear to be one of the teams in the mix for the young defender.
According to Rick Dhaliwal of Donnie and Dahli – The Team, the Carolina Hurricanes are close to trading Bear…

“There’s a rumour going around that Ethan Bear is close to being traded. The Carolina defenceman can’t get into Rod Brind’Amour’s lineup. I believe the Canucks are still trying to acquire Bear. He falls into that category of 26 and younger right-shot D, the Canucks like this player. He hasn’t played, he would need two to three weeks to get into game shape.
All these injuries are hurting the Canucks’ flexibility right now to make trades. The six guys on the injured list is not helping them to make trades, but they are in on Bear, they’re open to trades, but it’s hard with some of their bad contracts.”

Bear put together what appeared to be a breakout season on Edmonton’s blueline in 2019-20. He stepped up early in the season while Adam Larsson was on the Injured Reserve and ultimately logged 21:58 per night over the course of 71 games.
Advertisement
Ad
Advertisement
Ad
Early in the following season, Bear suffered a concussion after being hit in the head with a puck while sitting on the bench. He missed a handful of games and wound up falling down the depth chart when he returned. All told, Bear averaged 17:58 per night during the 2021 season, four minutes per game fewer than he played in 2019-20.
The Oilers dealt Bear to the Carolina Hurricanes in exchange for Warren Foegele the following off-season. Bear’s career with the Hurricanes got off to a solid start, as he logged 18:18 and had a plus-eight rating over 16 games in October and November. He missed a few weeks of play after contracting COVID in late November and struggled the rest of the season, logging 15:14 and posting a minus-seven rating after returning to the lineup.
Advertisement
Ad
Advertisement
Ad
He didn’t play in any of Carolina’s 14 playoff games last spring and was given permission to reach out to other teams about a trade last summer when he was a restricted free agent. The Hurricanes wound up re-signing Bear to a one-year, $2.2 million deal but he hasn’t suited up for the team yet in 2022-23.
The Canucks are 0-5-2 for the season and have allowed more goals than just about anybody else in the league thus far. Given how poor their blueline has been, Vancouver would be a suitable place for Bear to get some consistent playing time, which could help get his career back on track.

Kieffer Bellows is on waivers

Speaking of young players who are in need of a change of scenery, the New York Islanders placed winger Kieffer Bellows on waivers on Wednesday.
Advertisement
Ad
Advertisement
Ad
Bellows was selected with the No. 19 overall pick in the 2016 NHL Draft and generated a lot of hype as a prospect when he scored nine goals in seven games for the United States at the 2018 World Juniors in Buffalo…
Bellows has 11 goals and 25 points over 68 NHL games between his debut in February of 2020 and now. He put up good results in the AHL, highlighted by a 22-goal season in 2019-20, but hasn’t been able to find success at the NHL level.
Will somebody take a flyer on Bellows, a left winger with size, skill, and draft pedigree? The Oilers have Evander Kane, Zach Hyman, and Warren Foegele as their top three left wingers, and also Dylan Holloway on the shelf and Klim Kostin in the AHL, so it’s difficult to imagine they’d claim Bellows, who has a $1.2 million salary cap hit.
Advertisement
Ad
Advertisement
Ad

Coyotes getting set to debut at Mullett Arena

After kicking off their season with a six-game road trip, the Arizona Coyotes are scheduled to play their first game at Mullett Area on Friday against the Winnipeg Jets.
Mullett Arena, of course, is a 5,000-seat indoor multipurpose arena at Arizona State University. The Coyotes are playing there for a few years while they work on getting an actual NHL stadium built for them in Tempe.
For the first four games at Mullett Arena this season, visiting teams will have to use a temporary dressing room as the actual visitor dressing room is still under construction…

We got a first look at the temporary visiting team spaces (dressing room, training areas, etc.) for the first 4 NHL games at Mullett Arena!

The annex is being built and expected to be ready in December.

Advertisement
Ad
Advertisement
Ad
The Coyotes will host the Jets, New York Rangers, Florida Panthers, and Dallas Stars before going off on a 14-game road trip. They’ll start the trip on November 5 in Washington and they’ll finish on December 7 in Edmonton.

In Wednesday’s edition of Daily Faceoff Live, Frank Seravalli and Mike McKenna discussed whether the Calgary Flames are Canada’s best bet at the Stanley Cup given their 5-1-0 start to the season.

McKenna: “They are right now, but I’m not sure about by the end of the season.
I think for Calgary, all of the offseason additions have made sense and it’s worked out. Nazem Kadri is a top-10 player in the league, he’s been one of the best overall players across the board in the NHL. The rest of the group, Jonathan Huberdeau scored last night, MacKenzie Weegar has been great, and they’ve been getting great goaltending.
My pick, I still think by the end of the season that Edmonton is going to be the best bet out of Canada. Their shooting percentage is down a little bit, but at 5-on-5 that team has made strides. Once Edmonton starts finishing a bit more at 5-on-5 and if they can get their defense a little bit more active in the scoring I really believe that team is going to be there at the end of the season. What about you?”
Seravalli: “As good as Calgary’s start has been record-wise, I think they can actually get to another level. Kadri has been unbelievable, and Huberdeau has some room to grow and get accustomed to his new teammates.
You mentioned the Oilers, but how come nobody has mentioned the Toronto Maple Leafs yet? They put up 115 points last year, I know the first-round flameouts are connected to how we view this team’s chances to chase the Stanley Cup.
But they’ve been more or less mediocre to start the season, yet, at this point, they have a 4-3-0 record, so they’re above level ground. And, on top of that, Auston Matthews has one goal in seven games. How often are we going to see an Auston Matthews run with one goal in seven games the rest of this season? Probably never? He had a stretch last year with 53 goals in 56 games.
I imagine at some point soon, he’ll be getting close to that level again, and look out when the rest of that team starts to put it together. I’ve been a big believer in Ilya Samsonov all along in terms of his ability to take that job and run with it.”