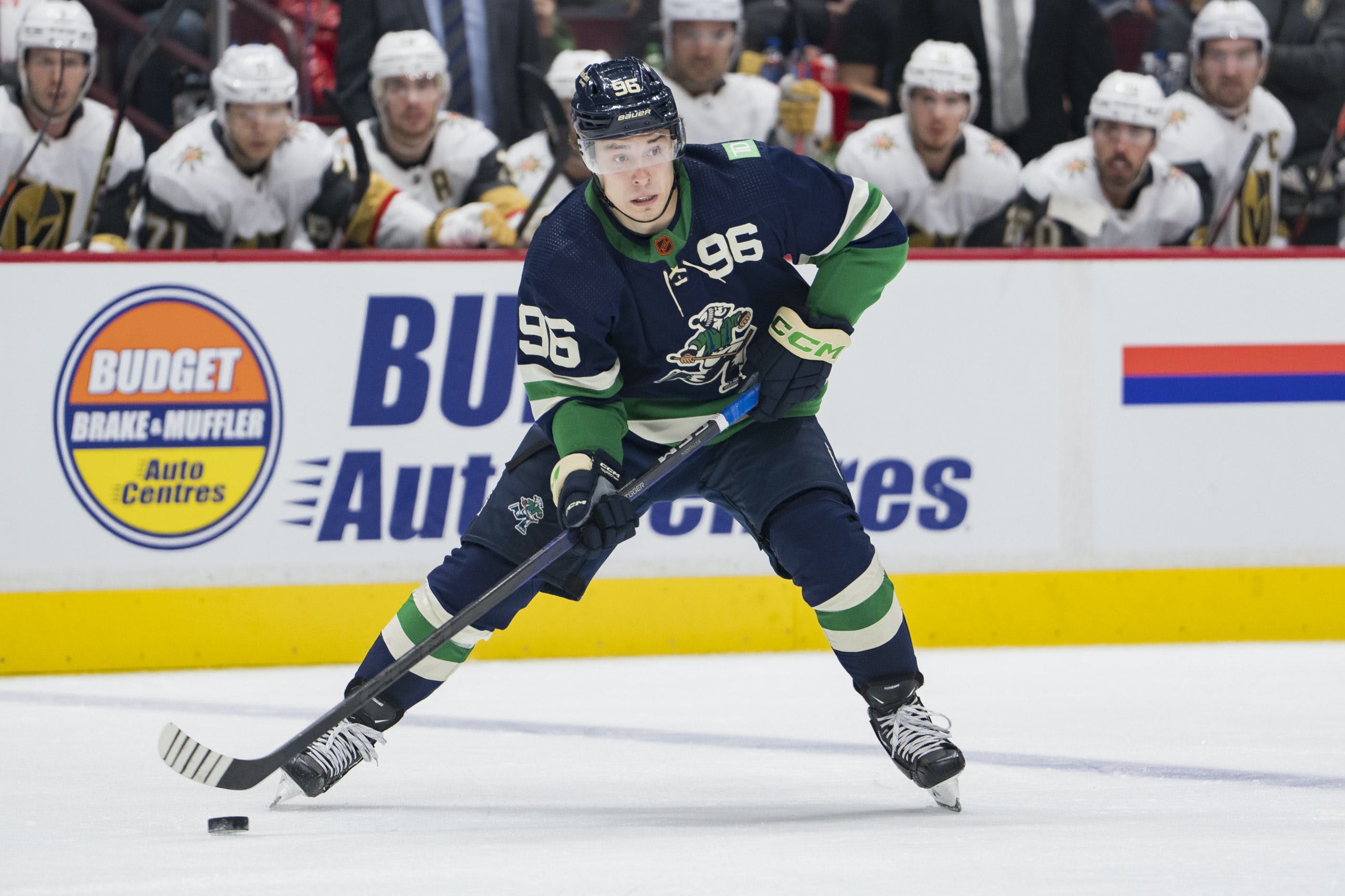 Photo credit: Bob Frid-USA TODAY Sports
By Zach Laing
2 months ago
Comments
Oh, what could’ve been.
The Oilers were one of the teams heavily courting KHL free agent Andrei Kuzmenko, but lost out as he signed with the Vancouver Canucks.
It was believed that the Oilers had been front runners for his services. The Canucks, however, were able to guarantee him top-six minutes and powerplay time and boy — has he made the most of it.
Kuzmenko has found himself on the Canucks’ second line alongside Elias Pettersson and Ilya Mikheyev, a trio that has dominated play at 5×5 this year. Through 19 games, Kuzmenko has scored eight goals and 16 points.
Hindsight is always 20-20, but maybe the Oilers would’ve been wise to give him the minutes he was asking for. Edmonton’s complementary top-six wingers — Jesse Puljujarvi and Kailer Yamamoto — haven’t been able to produce in any sense of the term and the latter hasn’t played since November 8th.
Advertisement
Ad
Advertisement
Ad
Kuzmenko had to sign an entry-level deal and he’s earning just $950,000 this season on the one-year contract he signed. He can be extended as soon as January 1st, and Kuzmenko will be due for a good raise.
Edmonton sure could’ve used the secondary scoring he’s brought this year.

A pair of Nashville Predators games have been postponed by the league.
The Predators were slated to host the Colorado Avalanche Friday morning and the Columbus Blue Jackets Saturday, but the Bridgestone Arena had other plans.
A water main broke outside the arena flooding the inside of the arena with three inches to three feet of water, Preds CEO Sean Henry told WKRN.com. The water line is reportedly a private service line that feeds Bridgestone Arena.
“Right now… it’s about getting everything dry as fast as possible, it’s gonna be expensive obviously…but the real focus for us right now is assessing the building and getting it ready for our events as soon as possible,” Henry said.
Advertisement
Ad
Advertisement
Ad

BREAKING: What appears to be a water main break on 6th Avenue by Bridgestone Arena has caused flooding inside of the arena. The Predators have a game scheduled there today. The Preds say they are "assessing the situation" to decide if that game and a college game will go on.@WSMV pic.twitter.com/zhjgoLLrLd

The Pittsburgh Penguins and Boston Bruins unveiled their winter classic jersey’s and honestly, I love them. The Pens are rocking the angular P on the front of the jerseys inspired by the MLB’s Pittsburgh Pirates of the 1920s.
The Bruins, meanwhile, busted out the meth bear logo and the team said their wordwork was inspired by the team’s look in the 1940s.
For the B’s, it’s their third Winter Classic game and fourth outdoor game. They’re 2-1 In Winter Classics with wins in 2010 and 2019, while the Penguins have played in two winning the inaugural Winter Classic game in 2008. It’s the Bruins’ fourth outdoor game and the Pens’ fifth.
Puck drop goes Jan. 2, 2023 at Fenway Park in Boston.

The 2022 NationGear Blackout Collection is out now and moving quickly, so you don’t want to wait on picking something up to beautify your wardrobe. Once these designs are gone, they’re gone. The clock is ticking.
Advertisement
Ad
Advertisement
Ad
Zach Laing is the Nation Network’s news director and senior columnist. He can be followed on Twitter at @zjlaing, or reached by email at [email protected]