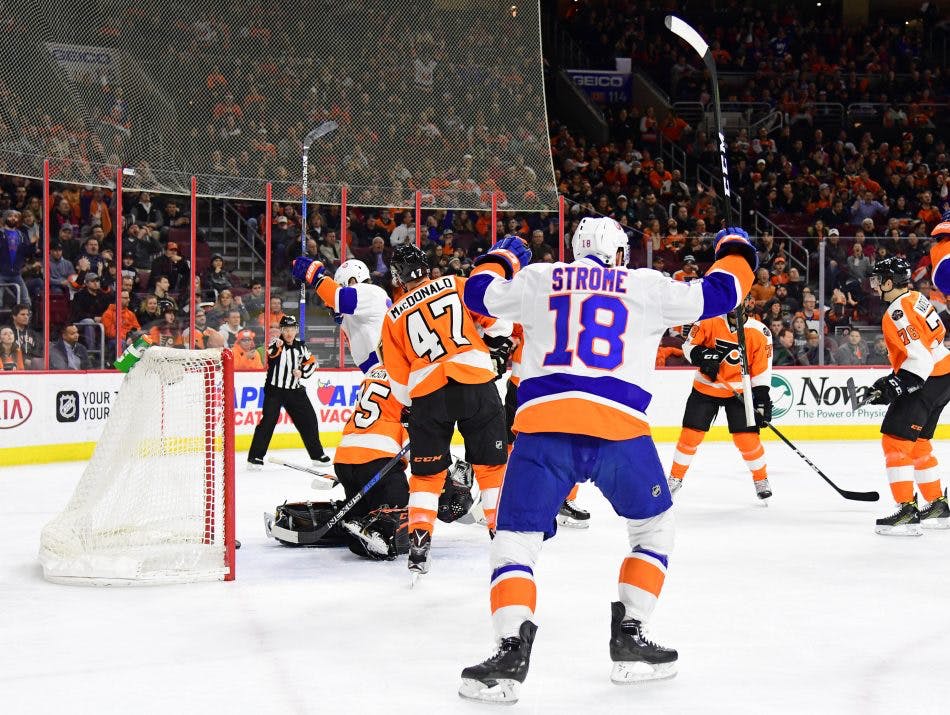 Photo credit: Eric Hartline-USA TODAY Sports
By Jason Gregor
5 years ago
Comments
General Manager Peter Chiarelli was asked about Ryan Strome and if he sees him as a winger or a centre?
“I think naturally he is a centre. I’ve talked to him three or four times in Chicago (at the draft) and at the airport in Toronto and I think he prefers to play centre. Based on what I’ve seen of his play in junior and in the NHL I think he is probably a centreman. Having said that, he has the skills, shot and stick sense to play on the wall. We will see what we have at the time (start of the season), but I have spoken to Todd (McLellan) about Strome playing centre and/or wing,” said Chiarelli.
Strome would like to play centre. He feels most comfortable there, although I guarantee he wouldn’t be upset if he was given an opportunity to play on Connor McDavid’s right wing.
Can the Oilers play Strome down the middle? Would it benefit them?
Advertisement
Ad
Advertisement
Ad
Chiarelli made it clear he has some other moves he could make once he finalizes the contracts for McDavid and Leon Draisaitl. Most assume when both are signed Ryan Nugent-Hopkins’ time as an Oilers will be short-lived. Not because he is a bad player, but because making $6 million as a third line centre doesn’t jive in a salary cap era when your top-two centres could be making between $19-$21 million.
Or maybe there is financial room for RNH if they plan on playing Draisaitl on the wing.
Based on today’s roster and Chiarelli’s comments regarding Strome we could see these lines on opening night.
Maroon-McDavid-Draisaitl
Lucic-RNH-Slepyshev
Caggiula-Strome-Puljujarvi
Khaira-Letestu-Kassian
The top line had great success late last season and starting them together to ensure another good start makes sense.
Slepyshev opened some eyes in the playoffs. He has more experience than Jesse Puljujarvi, and along with RNH and Milan Lucic they would be matched up against one of the top-two lines on the opposition.
Advertisement
Ad
Advertisement
Ad
Strome’s line would be very young. They would be matched up against the bottom two lines, especially at home. Strome hasn’t played much at centre over the past few seasons, so if they plan on playing him there I hope they put him at centre from day one of camp and all of the preseason. Even though he is most comfortable down the middle, he will need some preseason games and practice time to sharpen his centre skills. McLellan could swap Caggiula with Maroon if he wanted some more experience on Strome’s line.
Jujhar Khaira replaces Matt Hendricks on the fourth line and adds some more size. Khaira will battle with Iiro Pakarinen for ice time. He’ll need to be more consistent this year to stay in the lineup. Khaira needs to play. He only played 15 games in 2017, ten in the NHL with the Oilers between January and March, and five in the AHL during the same time span. He needs to force McLellan to keep him in the lineup, just like Tyler Pitlick did last year. Khaira needs to come to camp determined to win a regular spot in the lineup.
Advertisement
Ad
Advertisement
Ad

Mar 16, 2017; Edmonton, Alberta, CAN; Edmonton Oilers center Leon Draisaitl (29) celebrates after scoring a goal against Boston Bruins goalie Anton Khudobin (35) during the second period at Rogers Place. Mandatory Credit: Walter Tychnowicz-USA TODAY Sports
I’m a firm believer Draisaitl is capable of being a driver on his own line. He doesn’t need McDavid, although it obviously helps, and I’m sure we will see Draisaitl down the middle at some point this season. He was dominant in the playoffs vs. the Ducks when McLellan moved him to centre and I’d like to see him there this year. I understand if it doesn’t happen on opening night. The Oilers have a very favourable October schedule. They only have ten games and lots of practice time. They need to take advantage of it, especially when they have 16 games in 30 days in November.
The line combos look much different with Draisaitl down the middle.
Maroon-McDavid-Strome
Lucic-Draisaitl-Slepyshev
Caggiula-RNH-Puljujarvi
Khaira-Letestu-Kassian
These combos would allow RNH to play softer minutes and hopefully rediscover his offensive creativity. I expect Drake Caggiula to have a very strong sophomore season. He was injured in training camp, missed the first 18 games, and then had to play centre, something he hadn’t done in three years in College, yet Caggiula never looked beaten down. I like his speed, his quick release and his tenacity.
Advertisement
Ad
Advertisement
Ad
Playing him with either RNH or Strome against bottom six forwards could be very beneficial.
Puljujarvi is the wildcard for me. I hope they protect him and bring him along slowly. I’d have him on the third line and 2nd PP unit to start and hopefully, he finds some offensive success. Playing him higher in the lineup means he’ll face top pairing defenders, and it is much harder to produce against them. If he can produce even 15 goals I’d consider that a good year.
I could see him being a slower developer, which is fine, and in year three of four starts to dominate. I don’t care much where a player was drafted. Don’t try and force a player into a bigger role based on where he was selected in the draft. Play them based on how their play stacks up against NHL players.
Advertisement
Ad
Advertisement
Ad
Strome’s versatility could be very beneficial for the Oilers. It is great he wants to play centre, but he’ll need to prove he can do it effectively. Many young centres coming out of college or junior believe they are best down the middle. It can be a mental challenge to accept they might be better suited to play the wing in the NHL.
Can Strome play centre effectively? I don’t think we’ve seen enough to know for sure, but with McDavid, Draisaitl and Nugent-Hopkins in Edmonton, the Oilers don’t have to force it. If he plays well in the middle it will give McLellan more options, but if he gets a look on McDavid’s line he might suddenly feel right wing is the best spot for him.

I wouldn’t get too worked up over the Draisaitl contract negotiations. Every negotiation is different, but many players haven’t signed until late in the summer, during training camp or even after the preseason.
Advertisement
Ad
Advertisement
Ad
Last year Nikita Kucherov didn’t sign until October 11th. He ended up signing a three-year deal worth $4.76 million/season.
Johnny Gaudreau didn’t sign his six-year, $6.75 million/year deal until October 10th last year.
Sean Monahan signed his six-year, $6.375 million/year deal on August 19th last summer.
In the lockout-shortened 2013 season, PK Subban didn’t sign his 2nd contract until January 28th. He missed the first six games of the season, but he ended up winning the Norris Trophy. He needed a new deal after the 2013/2014 season, and he didn’t sign his eight-year, $9 million/year deal until August 2nd, 2014.
Jacob Trouba sat out the longest recently. He and the Winnipeg Jets never agreed to an extension until November 7th, 2016. They finally agreed to a two-year, $3 million/year deal. He and his camp even asked for a trade, but it never happened. Players exiting their entry level deal don’t have much bargaining power. Draisaitl can’t opt for arbitration, and the contract comparisons for him vary between Mark Schiefele($6.125 million), Monahan, Gaudreau and Vladimir Tarasenko ($7.5 million/year).
Advertisement
Ad
Advertisement
Ad
His agent will ask for more, that is his job, but if no team submits an offer sheet, which is unlikely, then Draisaitl’s bargaining power drops. Some negotiations take longer than others, but it doesn’t mean the player and organization are at odds. It is simply business.
Chiarelli values Draisaitl. They believe he is a big part of their future. Draisaitl likes Edmonton and is very close to McDavid and Darnell Nurse. He wants to be in Edmonton, and while I’m sure you will read a lot about salary demands as the summer progresses, I’d be shocked if a deal isn’t done before the season begins on October 4th.
**Speaking of deals. Expect the Oilers and McDavid to announce extension this week.**
Recently by Jason Gregor: