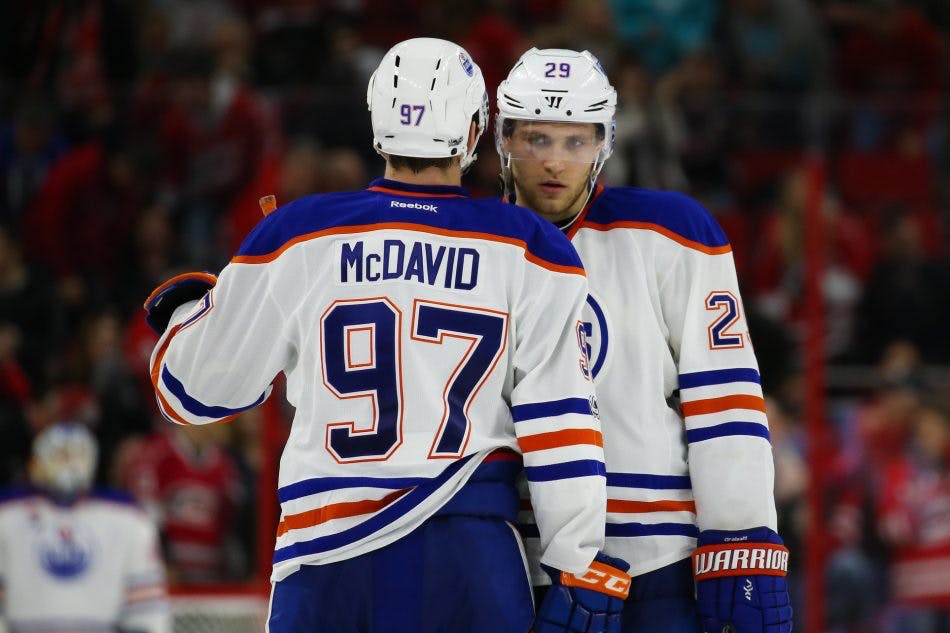 Photo credit: James Guillory/USA TODAY Sports
By Jason Gregor
5 years ago
Comments
According to Ryan Rishaug and Elliotte Friedman, Connor McDavid’s new contract will be eight years with a $13.25 million cap hit. He will have the largest cap hit in the NHL, a 21.2% increase over Patrick Kane and Jonathan Toews’ hit of $10.5 million.
It is a massive contract and the reported $106 million total is the 3nd largest in NHL history. Shea Weber’s 14-year deal was worth a total of $110 million, but his cap hit is $7.85 million, while Alex Oveckin has the highest at $124 over 13 years. You can’t sign a player for longer than eight years now.
The main question in Oilersnation is how will McDavid’s cap hit impact the Oilers’ chances of winning the Stanley Cup?
Having McDavid on the team gives the Oilers an advantage over most teams, but in the NHL you need depth and very good complementary players to win.
This past season McDavid played 21:07/game in the regular season and 22:24 in the playoffs. He’ll be on the ice 35-37% of the game. He can impact the game more in those minutes than most players, but the other 63-65% of the time the Oilers will need a good supporting cast if they hope to hoist the Cup sometime in the next nine seasons.
Advertisement
Ad
Advertisement
Ad
His new salary will undoubtedly impact Peter Chiarelli and how he constructs his team, but is a $13.25 million cap hit detrimental to winning?
Here is a quick look at the highest cap hit on recent Stanley Cup winning teams.
2017: Evgeni Malkin $9.5 million. 13% of salary cap ($73 million)
2016: Evgeni Malkin $9.5 million. 13.3% of salary cap. ( $71.4 million)
2015: Patrick Kane or Jonathan Toews $6.3 mill. 9.1% of salary cap ($69 million)
2014: Drew Doughty $7 million. 10.8% of salary cap. ($64.3 million)
2013: Kane or Toews $6.3 million. 10.5% of salary cap. **(cap was said to be $60 million, but could spend to $70.2 prorated due to lockout)
2012: Doughty $7 million. 10.8% of salary cap. ($64.3 million)
2011: Zdeno Chara $7.5 million. 12.6% of salary cap. ($59.4 million)
2010: Brian Campbell $7.142 million. 12.6% of salary cap. ($56.8 million)
2009: Sidney Crosby $8.7 million. 15.3% of salary cap. (56.7 million)
Advertisement
Ad
Advertisement
Ad
Crosby had the highest individual % in 2009. Since reports of McDavid’s new deal broke, many have compared it to Crosby’s 2nd contract and how they are similar in percentage of the salary cap at the time. When Crosby signed his new deal his percentage of the team’s cap was 17.3% and McDavid’s is 17.6%. So, yes that is accurate, however, I think it is a bit misleading. We are unlikely to see a similar increase in the cap after the deals were signed. The Oilers would need a massive increase for McDavid’s percentage to be similar to Crosby’s when the 2017/2018 season begins.
When Crosby signed his extension on July 10th, 2007 the salary cap for the 2007/2008 season was $50.3 million. It jumped to $56.7 million (a 12.7% increase) for the 2008/2009 season when Crosby’s deal kicked in. In order for McDavid’s contract to have a similar 15.3% of the total cap next season, the cap will need to come in at $86 million. A whopping $11 million increase from this year. To date the largest one season increase for the salary cap was $6.4 million. I’d be stunned if we see that large of an increase.
Advertisement
Ad
Advertisement
Ad
But one player doesn’t win the Cup, great teams win it. I think it helps to look at the core of a team and their salaries to see how Cup winners succeed under a salary cap.

Jan 21, 2017; Calgary, Alberta, CAN; Edmonton Oilers center Connor McDavid (97) celebrates his goal with teammates against the Calgary Flames during the second period at Scotiabank Saddledome. Mandatory Credit: Sergei Belski-USA TODAY Sports
The 2017 Penguins had Malkin, Crosby, Phil Kessel, Marc-Andre Fleury/Matt Murray and Kris Letang as their core five players. Letang was injured for the playoffs, but he was their #1 defender and they managed to acquire Ron Hainsey at the deadline to fill in admirably at a very low price. The Penguins were also unique because Murray and Fleury split time in the playoffs, but both were on the cap, so I will use Fleury’s number because he, like Letang, was one of their core guys to start their back-to-back Cup runs.
This past season those core five players totalled $38 million in cap space. They made up 52% of the Penguins’ overall cap.
Advertisement
Ad
Advertisement
Ad
In 2016 they had the same $38 million in cap space. They ate up 53.2% of the Penguins’ cap.
The 2015 Blackhawks had a larger core of Kane, Toews, Duncan Keith, Patrick Sharp, Marian Hossa, Brent Seabrook and Cory Crawford. Those seven totaled $41.3 million, which equaled $59.8% of the salary cap. Some would argue Niklas Hjalmarsson should be included, so add him and it jumps to $45.4 million and 65.8% of the cap.
The 2014 LA Kings had Doughty, Jonathan Quick, Anze Kopitar, Jeff Carter, Dustin Brown and Slava Voynov. Those five totaled $28.9 million, which was 49.8% of the cap. The Kings were a very deep team. Only one forward, Kyle Clifford, averaged fewer than 12:16 TOI/game in the playoffs in 2014. They also acquired Marian Gaborik at the deadline, but only had to pay a small portion of his total cap.
Advertisement
Ad
Advertisement
Ad
The 2013 Hawks had the same main seven, but Crawford was on a cheaper contract. Those seven combined for $38 million. The lockout season is tough to compare due to games played, as well as the $60 million cap, but remember they could spend up to $72 million pro-rated. I prefer just going with $64 million because that was the cap hit of 2012 and 2014. If we go by $64 million then those seven were 59% of the total cap.
The 2012 Kings had Doughty, Quick and Kopitar as their three stars. Mike Richards and Dustin Brown were their other main players. Those five totaled $24.52 million and only 38.1% of the cap. They added Carter at the trade deadline, but he only cost $1.3 million against the cap. They were a three-line team in the playoffs. Colin Fraser, Jordan Nolan and Brad Richardson played between seven and eight minutes a game. They had Quick on a very cheap second contract, $1.8 million and other solid contributors.
Advertisement
Ad
Advertisement
Ad
The 2011 Bruins had Chara, Tim Thomas, Patrice Bergeron, Milan Lucic, Dennis Seidenberg and David Krejci. Those six combined for $28.3 million, or 47.6% of the cap. Brad Marchand had a huge playoffs with 19 points. He only had 41 in the regular season in the final year of his ELC.
The 2010 Hawks had Brian Campbell and Hossa on big deals, but Kane and Toews were on their ELC. Keith, Seabrook and Sharp were on their second deals at $1.4, $3.5 and $3.9 million, respectively.  Those seven added up to $27.8 million or 49% of the cap.
The 2009 Penguins had Crosby, Malkin, Fleury, Gonchar and Staal. They won on the backs of Malkin and Crosby. Those two had 36 and 31 points each, respectively. Bill Guerin was third with 15 points. Those five totalled $24.73 million which equaled 43.6% of the cap.
Advertisement
Ad
Advertisement
Ad

WHAT DOES IT MEAN?

January 25, 2017; Anaheim, CA, USA; Edmonton Oilers center Connor McDavid (97) moves in for a shot on goal against the defense of Anaheim Ducks defenseman Cam Fowler (4) during the third period at Honda Center. Mandatory Credit: Gary A. Vasquez-USA TODAY Sports
Chicago had a great core, larger than most teams, and not surprisingly they ate up a large chunk of the overall salary cap. Pittsburgh won the past two seasons with five players eating up 52% and 53% of the cap. We must keep in mind that Crosby is on a 12-year contract. Those aren’t valid anymore, and that gives the Penguins a lot of cap flexibility because he has a lower cap hit. His first eight years of the deal would have him at a $10.8 million cap hit. So even if we factor in the extra $2 million, their core’s percentage of the total cap would have 54.7% this year and 56% last year.
Every team is built differently. The Kings had a lot of depth, and were more defence focused, but it is interesting to note that since 2013 the percentage of money from the core is higher than it was between 2009-2012. If that trend continues, then the Oilers will have some more room to pay their core, as long as they can secure a dominant group.
Advertisement
Ad
Advertisement
Ad
The most difficult aspect to factor into the equation of winning is experience. Would the Penguins have been able to win without Letang if most of their blueliners hadn’t played in the pressure cooker of the 2016 Cup run? I do believe having been there a year earlier allowed them to not panic as much as teams who hadn’t already won or been involved in a long playoff run. It is impossible to track, but I believe it is a factor.

So what will it mean for the Oilers moving forward?

The salary cap his risen by about $2 million dollars over the past three seasons. It was $69 million in 2015, $71.4 million in 2016, $73 million this past year and it will be $75 million next season.
So let’s say the cap will be $77 million when McDavid’s contract begins in 2018/2019.
Advertisement
Ad
Advertisement
Ad
McDavid’s new deal would take up 17.2% of the cap, but can their core group come in around 53%, which would be $40 million?
Leon Draisaitl’s new deal will play a major factor. For fun, let’s say he is at $7.5 million. (Of course he could get +8million plus)
Cam Talbot will be in the final year of his deal in 2018/2019 making $4.16 million.
Milan Lucic and Ryan Nugent-Hopkins are at $6 million each.  (I think will be very hard to keep RNH with McDavid and Draisaitl extensions)
Oscar Klefbom is at $4.16 million and Andrej Sekera is at $5.5 million.
Those seven total $46.57 million, which would be 60% of a $77 million salary cap.
I presume in 2019/2020 Talbot will get a raise, so even if the cap goes up $2 million, Talbot’s new deal would likely take most of it.
Advertisement
Ad
Advertisement
Ad
Is that core of seven strong enough to be the foundation to challenge, and ultimately win, a Stanley Cup over the next four season?
McDavid’s new contract is massive, and with him on the roster the Oilers will be a contender, but such a large cap hit eating up a large chunk of the salary cap percentage will make it a bit more difficult to win the Stanley Cup.
Far from impossible, but in the future the Oilers will need to find some players who outperform their contracts. General manager Peter Chiarelli has put a lot of pressure on himself to ensure he finds good value contracts moving forward and doesn’t have any “dead weight” contracts.
But the best news for the Edmonton Oilers and their fans is McDavid will be skating in Edmonton for at least another nine seasons. From a business perspective it makes sense. From an entertainment standpoint is a great deal for Oilersnation.
Advertisement
Ad
Advertisement
Ad
Recently by Jason Gregor: